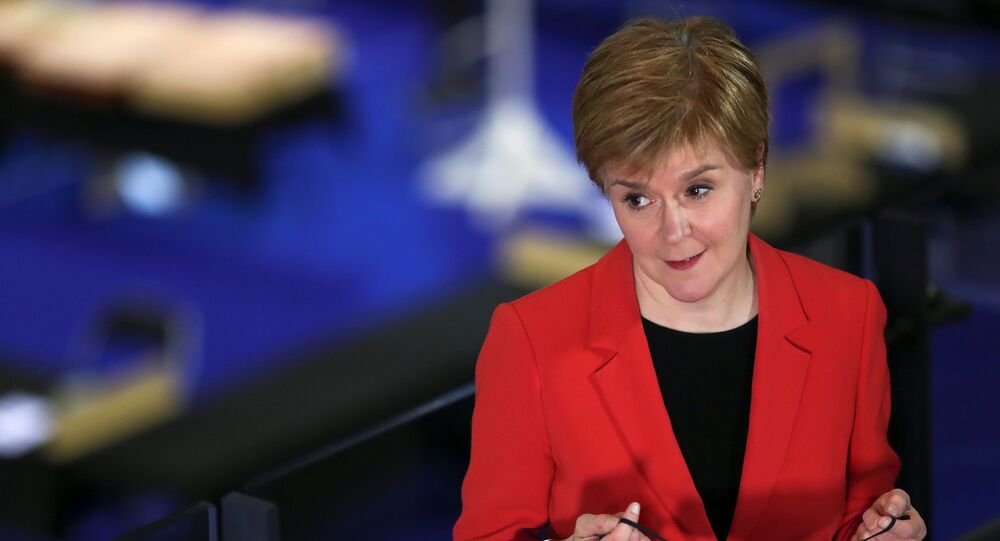 Former Labour and Respect Party MP George Galloway pointed out that only the UK Parliament in Westminster had the power to grant a repeat of 2014's Scottish independence vote that the Scottish National Party promised voters if it won the devolved legislative elections.

Broadcaster George Galloway has berated Scottish First Minister Nicola Sturgeon for squandering the Holyrood majority left by her predecessor — and with it her promise of independence.

In a Twitter teaser for his Mother of All Talk Shows programme on RT and Sputnik, the former Glasgow Govan MP said Scottish National Party (SNP) leader Sturgeon had "thrown away" the majority in the Scottish parliament she inherited from former first minister and party leader Alex Salmond in two consecutive elections to the devolved assembly.

Galloway pointed out that only 31 per cent of eligible voters backed the SNP, ands fewer than voted to leave the European Union in the 2016 referendum — the nationalists' pretext for demanding a repeat of the 2014 independence referendum which they lost by a margin of over ten per cent.

The Alba party, formed as a breakaway from the SNP by Salmond following a failed attempt by Sturgeon's government to pin sexual harassment and rape charges on him, won just 1.66 per cent of the vote.

​"The now anathematised Alex Salmond left his successor Nicola Sturgeon a parliamentary majority but she has, twice, thrown it away," Galloway wrote for RT's website.

© REUTERS / LEE SMITH
Boris Johnson 'Firm' in Face of SNP's Ongoing Push for Second Independence Referendum: Report
The former Respect party leader stressed the emptiness of Sturgeon's promise of a new plebiscite as early as 2022 — when she made the same pledge at the last Scottish elections — pointing out that only the Westminster Parliament has the power to legislate for one.

"There will NOT be a second Independence Referendum in the lifetime of this parliament. There is no 'mandate' for one," Galloway wrote. "No Supreme Court will overturn the constitution of the UK at the behest of a minority government with a minority of votes cast and less than a third of the people behind them."

Galloway led the pro-UK All for Unity party in the election which, like Salmond's Alba, stood only for proportional-representation regional list seats in an attempt to game the complicated D'Hondt electoral system used there. The party gained 0.86 per cent of the votes cast.