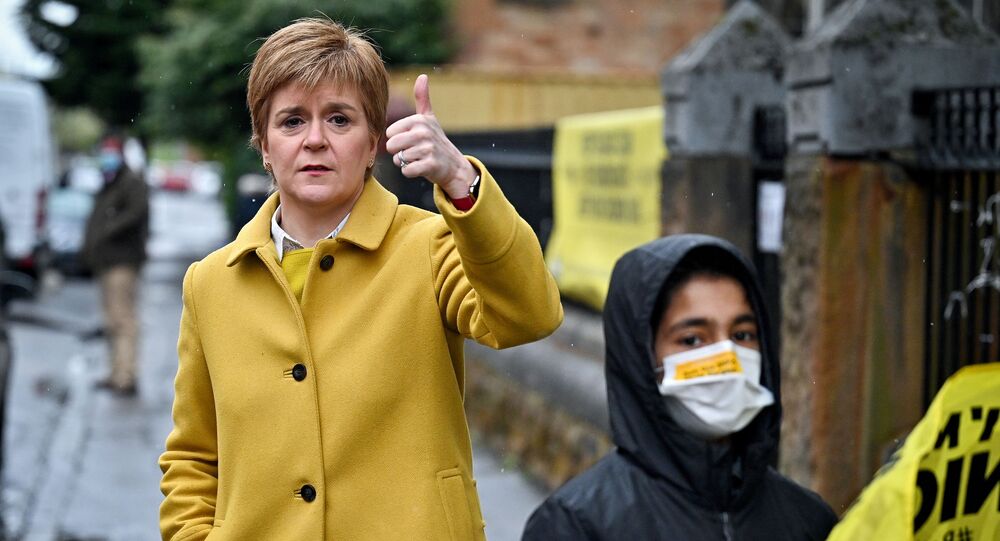 Despite being branded “fascist” by Sturgeon, Fransen insisted that she is merely a “decent unionist patriot”.

Scotland’s First Minister Nicola Sturgeon has labelled British right-wing activist Jayda Fransen a “racist” and a “fascist” as the two engaged in a heated exchange outside a polling station in Glasgow on 6 May, the day of the Scottish Parliament election.

According to The Sun, this development comes as Sturgeon and Fransen are standing for election in Glasgow Southside, with Jayda being confirmed as an independent candidate last month.

While Sturgeon initially seemed reluctant to converse with Fransen, walking away while saying "I’m sorry" when the latter addressed her, she eventually stopped and confronted Jayda, saying: "You are a fascist."

"I'm not the fascist. Do you really think Marxism is the way forward for Scotland?" Fransen retorted.

During the ensuing conversation, Sturgeon insisted that Fransen “doesn’t know anything” about the constituency in question.

"You are a fascist and a racist and the southside of Glasgow will reject you," Sturgeon insisted.

Fransen, on her part, slammed Sturgeon as "an absolute disgrace" while also telling an SNP supporter: "I'm not fascist, just a normal, decent unionist patriot."

Commenting on this situation, Sturgeon later tweeted that "Glasgow Southside is the most diverse and multi-cultural constituency in Scotland," stating that she’s confident that the constituency "will unite today to utterly reject these fascists".

Glasgow Southside is the most diverse and multi-cultural constituency in Scotland - one of the many things that makes it so brilliant. I am confident it will unite today to utterly reject these fascists. https://t.co/ygPJRksO2d

The 2021 Scottish Parliament election took place on 6 May, with the counting of the ballots beginning the following day.

As the media point out, the result of this election may affect the prospects of a possible second referendum on Scottish independence, as well as decide who will form the next Scottish government.