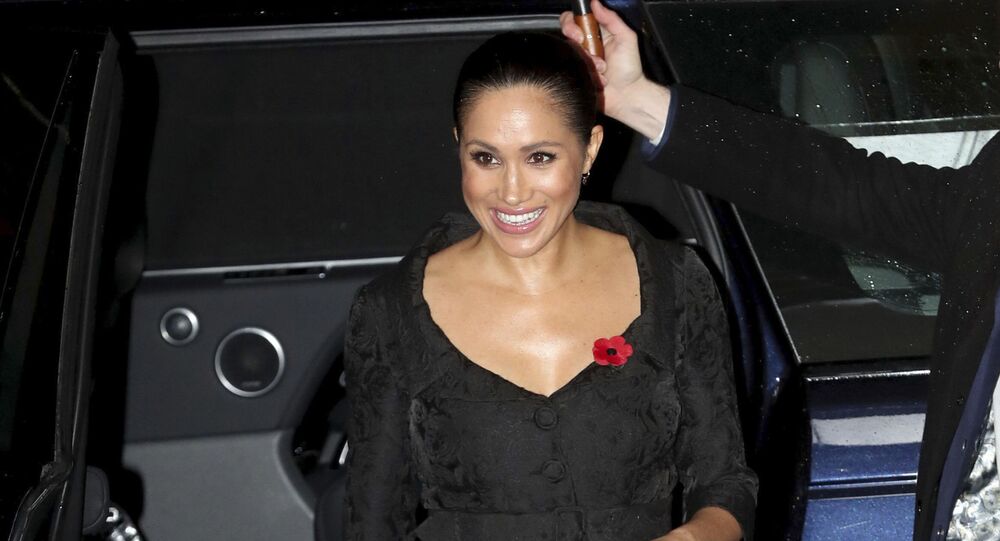 Runaway royals Prince Harry and Meghan Markle settled in the LA last year, effectively losing their patronages, privileges, and titles. They're still free to use their "Duke and Duchess of Sussex" names, but critics say they are trying to profit from the titles.

Meghan Markle’s decision to sign her soon to be released children’s book using her "Duchess of Sussex" title has been blasted as “ridiculous” and “laughable” by royal author Angela Levin.

Titled "The Bench," the book – which Meghan says began as a poem she penned for Prince Harry on Father’s Day when Archie was just one month old – is expected to be released on 8 June.

“The Bench gives readers a window into shared and enduring moments between a diverse group of fathers and sons—moments of peace and reflection, trust and belief, discovery and learning, and lasting comfort,” says @penguinrandom.

Meghan, who will narrate the audiobook, adds: pic.twitter.com/mH45bqnDsY

​But the book’s newly published cover, painted by acclaimed artist Christian Robinson, has already caused a stir among Brits, who are questioning why Markle is signing off as the Duchess given her very public criticism of "the Firm."

"The fact that she wants to cling on to her royal title and the book is written by Meghan, Duchess of Sussex, is laughable,” royal biographer Angela Levin told the Sun.

“Because they wanted to get away from the Royal Family, they hated the Royal Family – they felt trapped,” the author of "Harry: A Biography of a Prince" added. "They didn't like it, they wanted freedom and they’ve got freedom. You can’t have everything you want like that."

In a bombshell interview with US chat show queen Oprah Winfrey, the Sussexes explained that they left their senior royal posts in March 2020 to escape the "racist" UK media and due to a lack of support from Buckingham Palace. Meghan also claimed there were “concerns” from one unnamed royal about the skin tone of their son Archie when she was pregnant with him. Prince Harry backed up her claim but stopped short of revealing who it was, with Oprah later clarifying that it wasn't the Queen nor her late husband Prince Philip.

Meanwhile, the Duke of Sussex also said he believed his father Prince Charles and elder brother Prince William are “trapped” in the institution with no chance of leaving like he did. The two future kings were reportedly outraged by this claim.

Levin told the tabloid that it wasn't necessary for Markle to sign her upcoming book with her title – most royals really prefer not to.

"You don’t use your royal position to make commercial gain," the writer commented. "Not many people sign a book with their titles, it’s just ridiculous."

"They write their name and people should know who they are – they don’t add 'Duchess of this and that' after it," Levin went on, adding:

"If you want your privacy be quiet, don’t shout from the hills all the time saying ‘look at me now.'"

If Meghan hadn't opted to use her Duchess title, the other options on the table were Meaghan Markle or Meaghan Mountbatten-Windsor – she could have adopted the latter after her 2018 wedding, but the surname is usually ditched by the royals, who prefer to be known by their first names.

She ain’t no Duchess of ours.

Meghan, The Duchess of Sussex, isn't Britain's anymore. They had their chance and they blew it. She's America's now and we're not giving her back.

However, in general, news about the upcoming book has sparked more online joy than criticism, but some have raised the point that the title and style of Markle’s story very much resembles the "The Boy on the Bench" – a children’s book written by Corrinne Averiss nearly three years ago. The England-based author, however, has dismissed the "plagiarism" accusations, writing on Twitter that she sees no similarities.