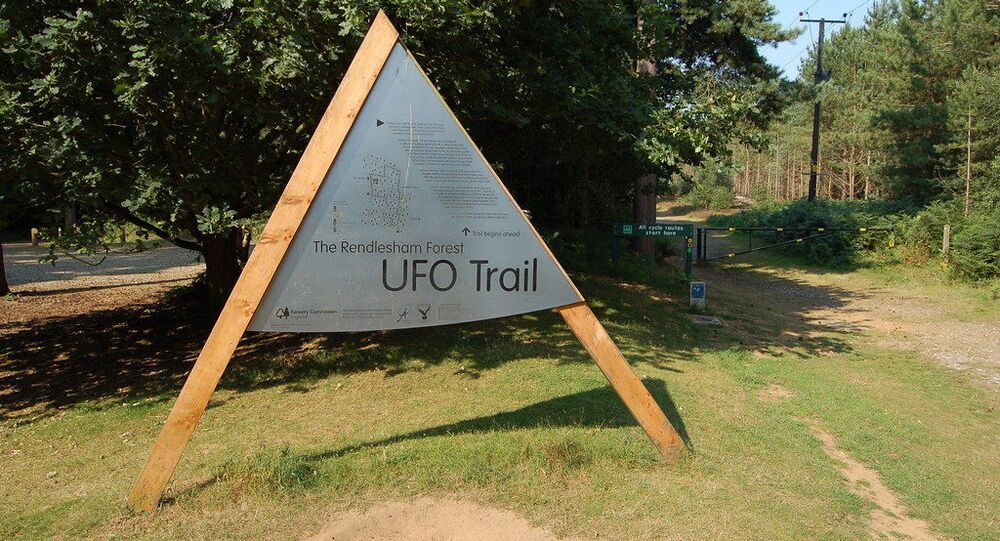 Suffolk’s Rendlesham Forest grabbed the attention of UFO hunters back in the 1980s when US military personnel stationed there claimed they had witnessed some mysterious bright lights and a triangular object at the site for several nights. The incident wasn't deemed as posing any significant threat by the defence authorities.

The Rendlesham Forest incident has taken a new turn: photos allegedly showing the same UFO spotted by the team of Colonel Charles Halt, the deputy base commander of RAF Bentwaters located near the spooky woods, have emerged online.

A witness, known only as “John The Poacher”, has shared the black and white photos through the UFO Casebook website, allegedly showing a mysterious round object hovering around in the woods on the night of 28 December 1980. The man said that he was just some 200 meters away from a group of US military personnel led by Halt when he took the bombshell images at the Rendlesham Forest after he went poaching that day.

First photo's released of the UFO at the centre of the Rendlesham Forest incident - Britain's most famous UFO sighting - ... pic.twitter.com/BC7LpCi16u

Military personnel from the two NATO bases in Suffolk, RAF Woodbridge and RAF Bentwaters, were the first ones to share their cryptic accounts of mysterious lights and a fast-moving glowing object that was making its way through the woods in the early morning of 26 December and then a night later, on 28 December, when Colonel Halt went out to investigate the weird occurrence. Halt detailed his account in a famous memo to the UK Ministry of Defence, that has majorly gone unanswered. The colonel has since criticised the authorities for covering up what he claimed was an extraterrestrial sighting.

The poacher seems to have corroborated the US military’s account. He says he has kept this information secret for over four decades…

“When I was younger I was a poacher, I lived very close to Rendlesham Forest and frequently went poaching there. So back in 1980, 28th December I was in the forest poaching,” the man shared.

“Now bear this in mind, before this encounter I saw and heard a lot of strange things in that forest. I could tell you stories that would bend your bones, so every time I went poaching I always took my camera always hoping to capture some evidence.”

© CC BY 2.0 / Draco2008 / Rendlesham Forest
UK's Most Famous UFO Sighting Was Just a Hallucinogen-Induced Military Experiment, New Book Claims
The poacher said that the object captured by his camera looked like “a basketball-sized red orb”.

“It was zig-zagging between the trees, strange, freaked me out, weird man, proper not right, I saw it before Halt. It passed me first,” John insisted. He then added that it was not the only encounter on that night:

“Halt and his team was about 200 meters away, I could hear all the noise. Later I saw another UFO it was firing beams of light down to the ground, definitely looking for something, God knows what.”

However, it cannot be said with certainty whether the pictures are genuine before more information about the type of camera and film are revealed, analysts told The Sun, a UK tabloid.

But the anonymous witness is confident about his “truth”: “After this thing happened I was followed for weeks, I had my phone tapped, scary time man. Anyway enjoy my photos, these are the real deal!!!” he wrote for the website, while keeping his full identity secret.