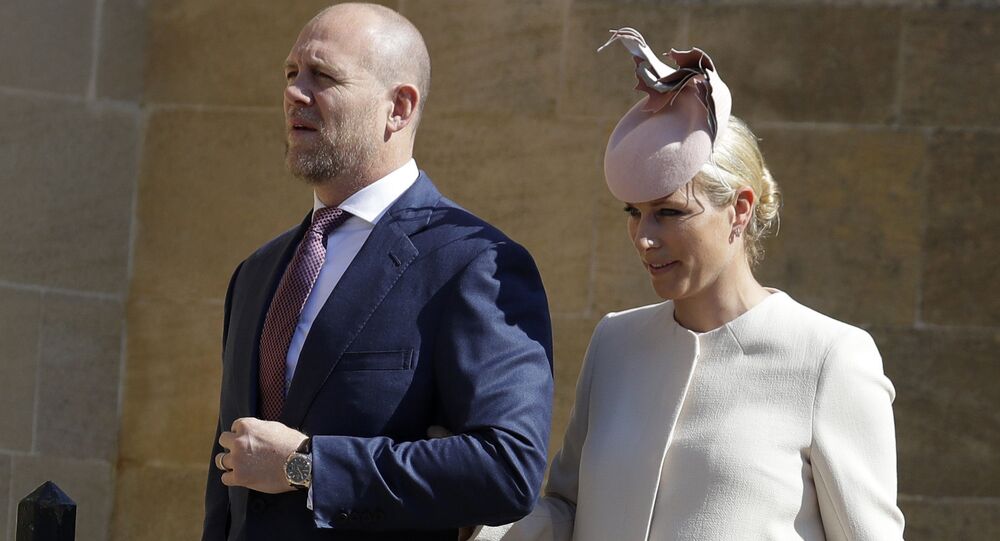 Zara Tindall, who is the only daughter of Princess Anne, gave birth to another member of the British royal family, Lucas Philip Tindall, on 21 March. However, his arrival in this world didn’t go according to plan, Zara’s husband Mike Tindall has revealed…

Queen Elizabeth’s tenth great-grandchild Lucas Philip Tindall was born on a bathroom floor as his happy but slightly alarmed parents didn’t have time to go to hospital, Mike Tindall earlier revealed during his ‘The Good, The Bad & The Rugby’ podcast.

"Sunday got even better because a little baby boy arrived at my house,” the Queen’s grandson-in-law shared in late March. "So, it was run into the gym, get a mat, get into the bathroom, get a mat on the floor, towels down, ‘brace-brace-brace’."

Speaking to ‘Good Morning Britain’ on Friday, Mike spilled more details about his son’s birth, saying that it was not how the couple had imagined this at all.

He was also ready to dismiss rumours that he was the one to deliver his son:

“No, that’s not true. Fortunately the midwife got there in time so I didn’t have to go down to the area... the downside... the wrong end, I got to stay at the top end and be supportive,” Mike told hosts Ben Shephard and Kate Garraway.

"Sorry, the ‘business end’ would have been a far better way of describing it!" he then laughed, when corrected by the host, who said that women would probably not enjoy his description of the process.

"It wasn’t what we were expecting, but Zara’s best friend Dolly, who is a maternity nurse, was there and had the situation in control. And then the midwife arrived, which made me breathe a sigh of relief that I could just be chatting to Zara and trying to get her through it."

'She leads by example.'@miketindall13 praises the Queen as he tells Ben and @kategarraway that the way Prince Philip's funeral was planned and run was 'exceptional'. pic.twitter.com/rjwaad6pib

​According to Mike, 42, he was happy to become a father of a baby boy as the couple already has two daughters, 7-year-old Mia and 2-year-old Lena.

"It’s been a little bit of a rollercoaster of emotions in terms of highs and lows, but he’s been brilliant to be fair," Tindall said. "It’s nice to have a boy around to keep me company. The girls are outnumbering me by quite a number so it’s nice to have Lucas around."

He earlier described his wife Zara, 39, as a “warrior”, as the couple was spotted outside just two days after Lucas Philip was born.

The Queen’s eldest granddaughter Zara previously gave birth to both of her children in medical facilities: in hospital and at a birth centre near the family’s home. But Mike said there was actually one great thing about having his wife give birth at home: the two have bonded very quickly.

"The best thing about being at home was as soon as he's wrapped up it was skin to skin, I was straight downstairs, TV room, golf on,” Mike said earlier on.

In a statement released several days after the boy’s arrival, Buckingham Palace extended its greetings to the newborn, expressing hope that he would soon meet both his great-grandparents:

“The Queen and The Duke of Edinburgh are delighted with the news and look forward to meeting their 10th Great Grandchild when circumstances allow,” the palace said on 24 March.

It’s not clear whether Prince Philip had managed to privately meet his namesake Lucas Philip in the end, as he peacefully passed away on 9 April at Windsor Castle. Mike Tindall, a former professional rugby player, commemorated the Duke of Edinburgh’s death with a sweet Instagram photo showing his grandfather-in-law having a snack alongside the Tindall’s oldest daughter Mia.

"It’s been a very sad week but it has given us time to reflect on great memories and stories both personal and shared. A devoted family man who we will forever miss but always love,” Mike Tindall captioned the pic, which was taken by Kate Middleton.