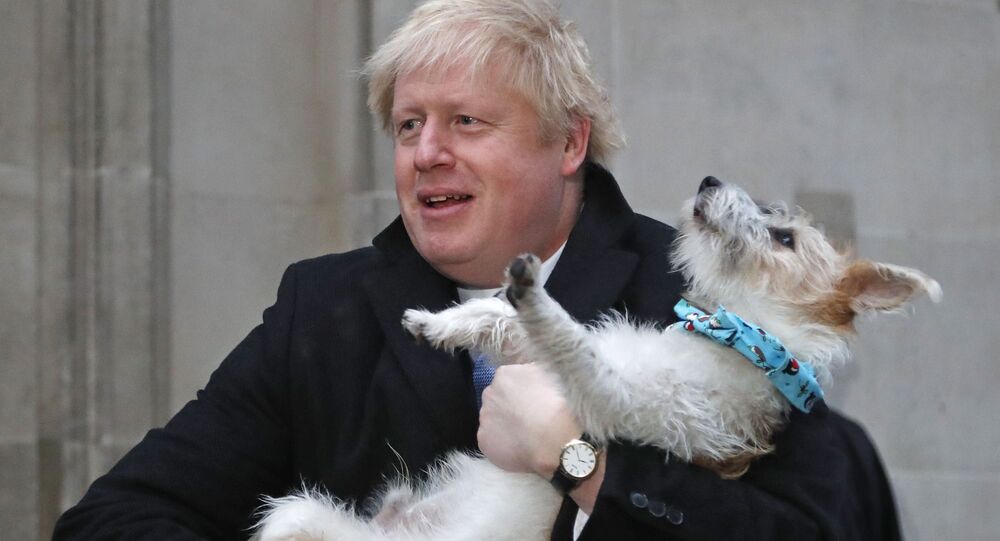 Adopted by Boris Johnson and his partner Carrie Symonds in 2018, the white, male Jack Russell cross named Dilyn has been accused of a spate of misdemeanours, such as cocking his leg over the bag of a departing Downing Street aide and gnawing antiques and books at the country residence in Buckinghamshire, Chequers.

Boris Johnson's morning run on Thursday was disrupted by that ‘bundle of energy’, Dilyn the dog, shared by the UK prime minister with his fiancée Carrie Symonds.

The feisty Jack Russell cross had spotted a Canadian goose on a footpath in St James's Park, Westminster, and lunged for the startled bird.

Johnson, however, was able to restrain his three-year-old dog, which was fortunately on a lead, and gave a thumbs up to reporters for the Daily Mail as he proceeded on his run.

​Johnson and Symonds adopted Dilyn, rescued by Friends of Animals Wales from a breeder in South Wales, in 2018. The engaging pooch was accordingly taken along by Johnson on the election campaign trail in 2019.

However, the pup has reportedly racked up quite a list of Dilyn-related misdeeds.

Thus, Boris Johnson called for someone to ‘please shoot that f****** dog’ in February after he was left facing a four-figure damage bill to ‘make things good’ after his pet’s exploits at Chequers, wrote the Daily Mail.

Dilyn had reportedly chewed on antique furniture and books at the 16th century country residence in Buckinghamshire.

​A mess on the floor was also said to have been attributed to the pooch.

Presented to the nation by Sir Arthur Lee, with a trust-fund towards its upkeep, the property’s Great Hall boasts a wealth of antiquities and art. Johnson and his fiancee spend many weekends at the estate, taking the Jack Russell-cross for walks.

“I was at a meeting where Dilyn darted under the PM’s feet with an old book in its mouth. The PM shouted “for God’s sake, I’m going to get another £1,000 repair bill! Someone please shoot that f****** dog!” Luckily, Carrie wasn’t around to hear him… I don’t think he meant it literally,” an insider was quoted as saying.

According to a government source, staff at Chequers are not huge fans of the terrier.

“He causes havoc, gnawing at the furniture and soiling the carpets which have to be cleared up,” claim insiders.

Earlier, Dilyn stirred up a ‘watergate’ row by cocking his leg over the handbag of aide Katie Lam, as she was leaving Downing Street.

Sources claimed the reaction to the incident from the aide, who has since left her post, made Carrie Symonds ‘very angry’.

A Downing Street spokesman said was cited as denying that Lam’s departure was in some way linked to the incident. Defending the antics of the dog, a No 10 source was cited as saying:

“He is a lovely little fellow but does not appear to have got enough training when he was a puppy. He has bundles of energy and constantly gets under your feet... he doesn’t know any better.”