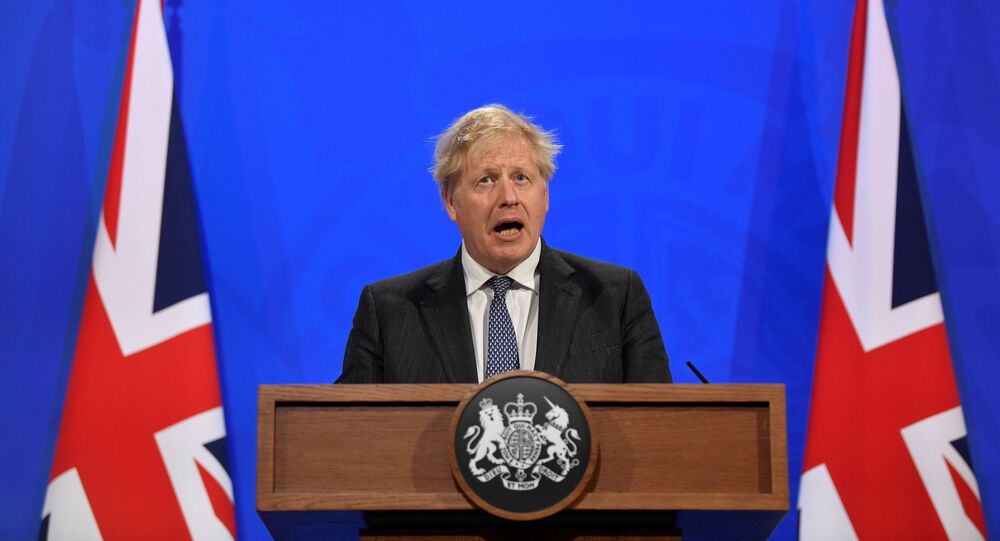 British billionaire entrepreneur James Dyson has found himself at the heart of a political row triggered when private text messages exchanged between him and UK Prime Minister Boris Johnson were leaked amid a wider probe into lobbying involving the government and the private sector.

British billionaire entrepreneur James Dyson has waded into the scandal surrounding “damaging” leaked texts between him and Boris Johnson, dismissing accusations that his actions had been inappropriate.

The March 2020 messages to Dyson revealed the UK Prime Minister assuring the businessman his employees would not be required to pay additional taxes if they came to the UK to make ventilators for the National Health Service (NHS) amid the pandemic.

Offering his first comment on the political row that gained traction after the texts emerged last week in a BBC/Kuenssberg story, the British inventor and industrial designer slammed the national broadcaster for “grotesque mischaracterization” when describing the connections between him and the Conservative Party.

“The BBC's characterisation of me as a prominent Conservative donor, or supporter, leveraging a position of power to extract favours from the Prime Minister, is completely untrue. I have met Boris Johnson only three times... I have not attended any Conservative social events,” wrote Dyson in the Daily Telegraph.

The inventor best known as the brain behind the Dual Cyclone bagless vacuum cleaner insisted that it had been “entirely the right thing” for the UK Prime Minister to message him directly about proposed changes to the tax status of his employees making ventilators during the pandemic.

“There were myriad questions, from the technical to medical and compliance. It was in this context that we wrote formally to the Chancellor on March 15 for clarification on how UK tax rules would apply during this period of unprecedented upheaval. Far from concealing the text exchanges, we shared them explicitly with officials at the Treasury and No10 via email on March 28,” wrote Dyson.

James Dyson had joined forces with scientists and a Cambridge-based Technology Partnership to produce 10,000 ventilators for hospitals across Great Britain as the country has struggled to contain the spread of the respiratory disease.

In response to James Dyson’s diatribe, a BBC spokesperson has been quoted by the Daily Mail as saying:

“The BBC has led the way on reporting a significant story which is clearly in the public interest. Sir James Dyson has informed us he is not a prominent Conservative supporter.”

Boris Johnson and his Conservative Party are currently facing an array of cronyism and lobbying accusations from opponents, including the opposition Labour Party.

Last week, Johnson had been forced to furiously defend himself after the emergence of the leaked private texts.

In March 2020 James Dyson had penned an official letter to the UK Treasury requesting that the tax status of his staff be allowed to remain unchanged after their relocation from Singapore to the UK to help make ventilators for the NHS amid the COVID-19 pandemic.

However, in a private text seen and subsequently reported by the BBC, Boris Johnson promised the businessman that he would “fix it” himself.

He then added, “Rishi says it is fixed!! We need you here.”

Apparently, some two weeks later, Chancellor Rishi Sunak told a group of MPs that the tax status of people who arrive to the UK to provide specific help during the pandemic would not be affected.

As the deal between Johnson and Dyson was revealed, it triggered a firestorm of criticism from the Labour party.

“What this shows once again is the extent of the sleaze and the cronyism that is at the heart of his Conservative government,” said party leader Keir Starmer during the Prime Minister’s Questions.

Shadow business minister Lucy Powell was quoted by the BBC as fuming:

"Frankly it stinks that a billionaire businessman can text the prime minister and get an immediate response and, apparently, an immediate change in policy."

Boris Johnson told lawmakers that he makes "absolutely no apology at all" over his messages to Dyson, insisting his goal was to "save lives" during the COVID-19 pandemic.

The developments come amid a much broader inquiry launched by Boris Johnson’s opponents into allegations of government lobbying efforts on behalf of private companies.

The bank has since filed for insolvency protection on 8 March 2021. The lobbying had included directly texting Chancellor Rishi Sunak.

A spate of inquiries have since been launched to investigate lobbying carried out in the government.

“We will look into whether the rules need tightening up and clarifying and we will make any necessary recommendations without fear or favour.”

The probe was launched amid inquiries spearheaded by Boris Johnson and Westminster’s Treasury Select Committee earlier.

We have launched an inquiry into the propriety of governance in light of Greensill.

Under the ministerial code, “a private secretary or official should be present for all discussions relating to government business.”