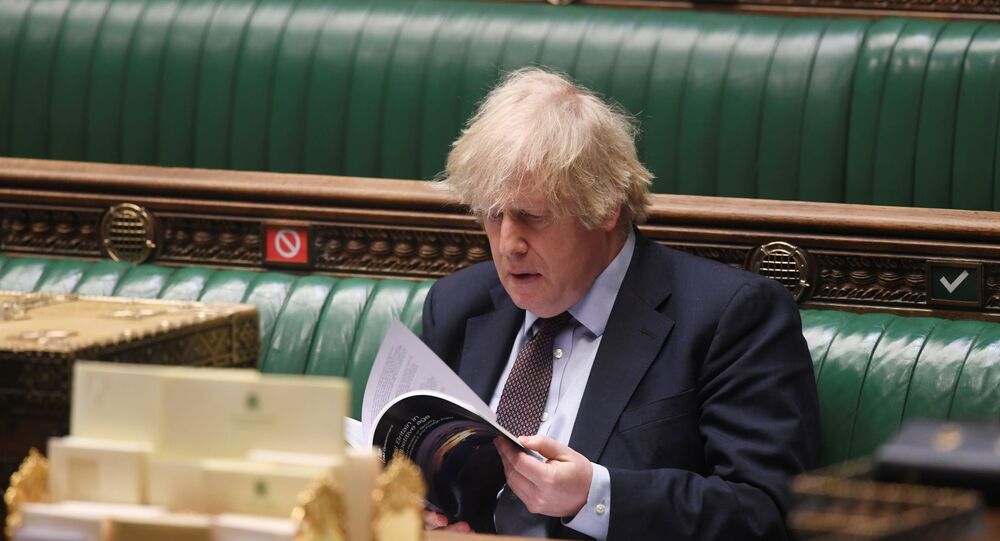 LONDON (Sputnik) – The leader of the Scottish National Party in the UK Parliament, Ian Blackford, said on Monday that Prime Minister Boris Johnson should resign if media reports claiming that he had allegedly said that he would rather see "bodies pile high in their thousands" than impose a third COVID-19 lockdown are true.

"These comments are utterly abhorrent. If they are true, Boris Johnson has a duty to resign", Blackford wrote on his official Tweeter account.

The SNP lawmaker also said that Johnson must come to Parliament to give a statement and face questioning "on these shocking claims and the growing Tory sleaze scandal engulfing Westminster".

Citing unnamed sources, the Daily Mail newspaper online edition claimed on Sunday evening that after ordering a second COVID-19 lockdown in October, the Conservative prime minister had said: "No more ****ing lockdowns – let the bodies pile high in their thousands!"

"None of this is serious. The prime minister has been utterly focused on delivering, alongside cabinet colleagues, the response to COVID", Wallace told Sky News broadcaster on Monday.

Health Secretary Nadine Dorries also took to the Tweeter to dismiss the report as an "outright lie" and a "mendacious, vexatious coordinated gossip" aimed at negatively influencing the upcoming 6 May local elections.

Meanwhile, Labour leader Keir Starmer, whose party has requested a full investigation into the way Johnson paid for the refurbishment of his official apartment in Downing Street and other claims of government ministers favouring friends with contracts, has reportedly said that he was astonished to read the newspaper’s report and urged the prime minister to make a public statement about that.