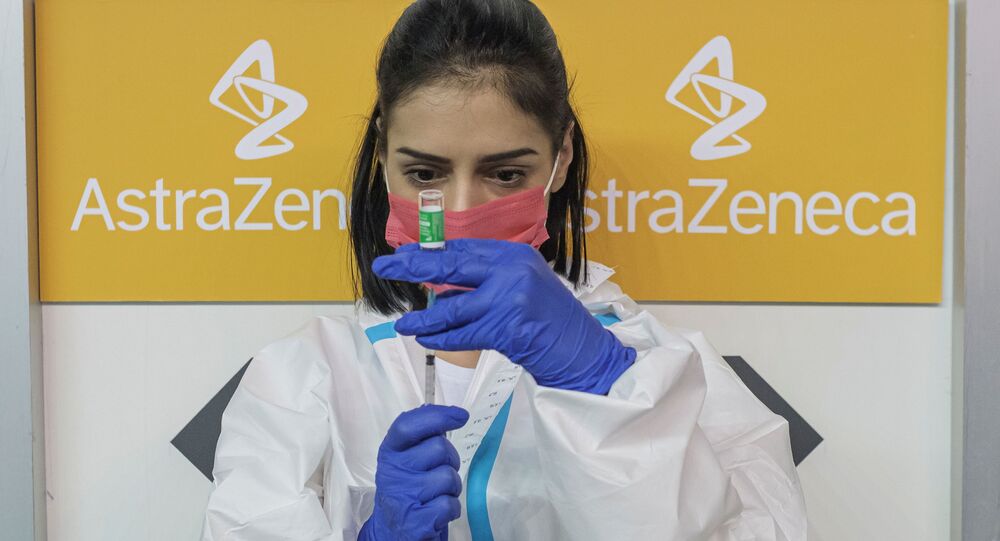 Did the UK's Pharmaceutical Regulator Miss Link Between AstraZeneca Jab and Blood Clotting?

From early January to mid-March, a total of 532 "blood system events", including 20 related deaths, passed through the UK's Yellow Card system. All those cases were registered among those who had taken the UK-Swedish coronavirus jab, according to an analysis of published MHRA data by scientist Dr Hamid Merchant of the University of Huddersfield.

It appears that despite the UK's now sovereign medicine watchdog giving assurances that no increased blood clot incidence was associated with the AstraZeneca inoculation, there have been flagrant, long-standing signals that proved otherwise, as per an investigation by The Telegraph.

As it has now emerged from Britain's Yellow Card system, back in January, a patient suffered a brain clot after having been administered the first dose of the AstraZeneca jab, the edition claimed. After that, in early February, two similar cases ensued, including one death and a life-changing cerebral venous sinus thrombosis clot (CVST) in a young adult. In all of the said cases, the patients, included in the Yellow Card system, showed low platelets.

Addressing the issue in comments to The Telegraph, the Medicines and Healthcare products Regulatory Agency (MHRA) said:

"We are aware of thromboembolic events that occurred in January, however, our first report was received in the week commencing 8 February.... we cannot disclose information about individual cases to protect patient and reporter confidentiality".

Despite experts assuring that the risk of developing CVST accompanied by a low platelet count or thrombocytopenia is really minute after being immunised against COVID, the MHRA faces questions as to why it didn't detect and comment on the worrisome links sooner.

It doesn't mean, though, that the MHRA's earlier response would have altered its strong advice to get immunised against the deadly and highly unpredictable infection, but the certain delay rendered the watchdog unable to shape international police and boost the public's overall confidence in at least the AstraZeneca jab, the key locally-produced inoculation in Britain, The Telegraph notes.

The edition's investigation suggests that the MHRA was slower than their colleagues in other western countries to spot the early signals. According to to the cited observers, this should be seen in the context of the "operational and logistical challenges" the regulator faced in the run-up to the UK formally leaving the EMA on 31 December, and the MHRA becoming a sovereign watchdog starting from 1 January.

From 4 January to 14 March, overall 532 "blood system events", including 20 deaths, were registered through the UK's Yellow Card system pertaining to the AstraZeneca jab, as follows from an analysis of published MHRA data by Dr Hamid Merchant, a pharmaceutical scientist at the University of Huddersfield.

Separately, thousands of non-blood-related reports arrived, aside from the said ones.

© AP Photo / Thomas Coex
A member of the medical staff shows the vial containing the AstraZeneca Covid-19 vaccine dose for Prime Minister Jean Castex, at the Hopital díInstruction des Armees Begin, in Saint-Mande, on the outskirts of Paris, Friday, March 19, 2021

Of the total number of thrombotic events recorded, four related to CVST (but no deaths were registered), 55 were non-site specific, while there were clusters of 64 and 66 cases in the lungs and deep veins respectively.

There were then 267 general bleeding events and six deaths, three of which resulted from cerebral haemorrhages. Additionally, there were 60 cases of thrombocytopenia, including 2 deaths.

To sift through such statistics, regulators use algorithms that must balance "sensitivity". The more sensitive the algorithm is, the more warning signals it will spit out.

It remains unknown what parameters the MHRA set for its analysis, but it is clear they were not as sensitive as those used by some regulators in Europe, The Telegraph notes.

British haematologists depicted the rare clotting associated with the AstraZeneca jab, and later with the Johnson & Johnson vaccine, as "a unique syndrome that we have never seen before", adding that it only became apparent once the alarm had been set off across Europe.

Incidence in the EU

Initially in Austria, on 7 March, and days later in Denmark, Norway, and Iceland, local healthcare regulators began to report small numbers of blood clots and deaths among people who had received the British-Swedish jab.
Subsequently, on 15 March, Germany announced seven such cases and three deaths and, joining the aforementioned countries, suspended the use of the vaccine. By the end of March, the number of blood disorder cases clocked by the country had hit 31.

The AstraZeneca jab became associated with a "striking accumulation of a special form of very rare cerebral vein thrombosis in connection with a deficiency of blood platelets and bleeding", the Paul-Ehrlich Institut, Germany's renowned medicine regulator, said at the time.