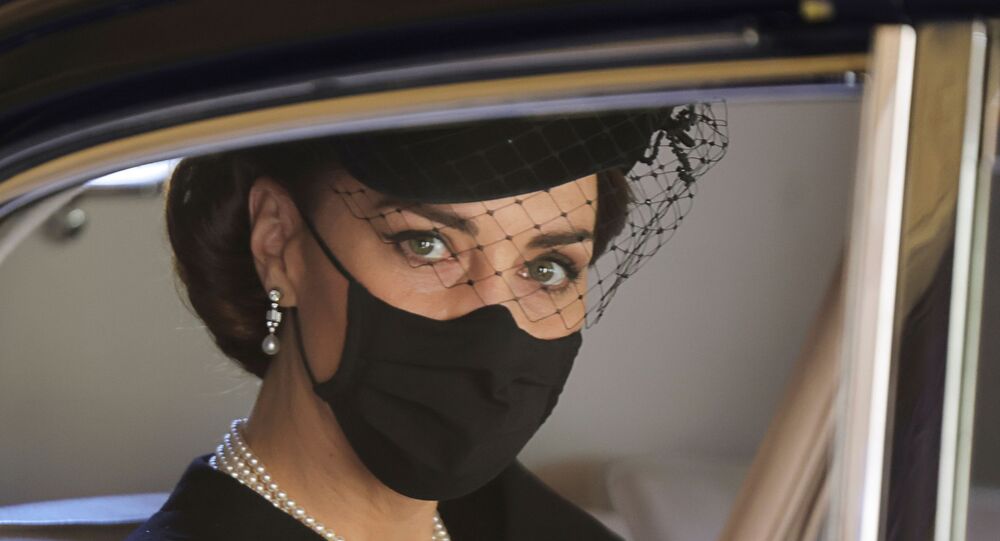 Relations between the two brothers are said to have soured after Prince Harry and Meghan Markle announced their decision to quit royal life. The ties between the siblings reportedly worsened further after the Sussexes gave a tell-all interview to Oprah Winfrey, in which they made several sensational allegations against the Royal Family.

While the UK public's thoughts were with Prince Philip, who was laid to rest on 17 April, all eyes were on Prince Harry and Prince William with hopes that the two siblings will reconcile. During the funeral ceremony they did not walk alongside each other and were separated by their cousin Peter Philips.

Buckingham Palace refused to comment on the decision, with a royal spokesman saying it was made by the Queen and that the family wouldn't be "drawn into drama".

© REUTERS / Alastair Grant
ritain's Prince William, Duke of Cambridge and Prince Harry, Duke of Sussex walk behind the hearse on the grounds of Windsor Castle during the funeral of Britain's Prince Philip, husband of Queen Elizabeth, who died at the age of 99, in Windsor, Britain

In St George's Chapel, where the family attended the service, the two brothers again sat apart, but as the royals emerged from the building, Kate Middleton, wife of Prince William, who was described as a "peacemaker", started chatting with Prince Harry and soon Prince William joined the conversation. Instead of getting into separate cars the trio then decided to walk together to the castle with Willian and Harry walking side by side.

​The scene was something the British media and royal experts expected to happen – the two brothers putting up a united front in order to support the Queen while she mourns her husband and possibly reconciling.

Former British Prime Minister Sir John Major, who was appointed a special guardian to the two princes following the death of their mother Princess Diana in 1997, expressed hope that it is possible for the siblings "to mend any rifts that may exist" between the two.

Megxit and Tell-all Interview With Oprah

Reports say the cracks in relations started after Prince William advised his brother not to rush into marriage with Meghan Markle and take as much time as needed to know "this girl". In 2019, Prince Harry seemingly admitted speculation about the discord saying the two brothers "are certainly on different paths at the moment".

At the beginning of 2020, the Sussexes announced their decision to step down from senior roles in the Royal Family in order to work to become financially independent. The move was dubbed Megxit by the local press as the media speculated it was Meghan who came up with the decision. Reports say William was deeply upset with Harry and the two brothers didn't speak for months.

© REUTERS / Victoria Jones
22 Members of Royal 'Bubble' Will Comfort the Queen While She Mourns Prince Philip, Report Says
In March 2021, the Sussexes gave an interview to famous US talk show host Oprah Winfrey, in which they made several sensational allegations. Meghan, whose mother is black, claimed one member of the Royal Family was concerned about the potentially dark skin of the couple's firstborn child. Prince Harry said his father and brother are "trapped" within the system and described his relations with William as "space".

These and other allegations are said to have made William furious. According to US TV presenter Gayle King, who is close with the Sussexes, the brothers held a conversation following the interview, but it was not "productive". During the funeral ceremony on Saturday, King said that relations between the two are still "strained".

It is believed that Prince Harry will spend more time with his family and will celebrate the Queen's birthday on 21 April before heading back to California.