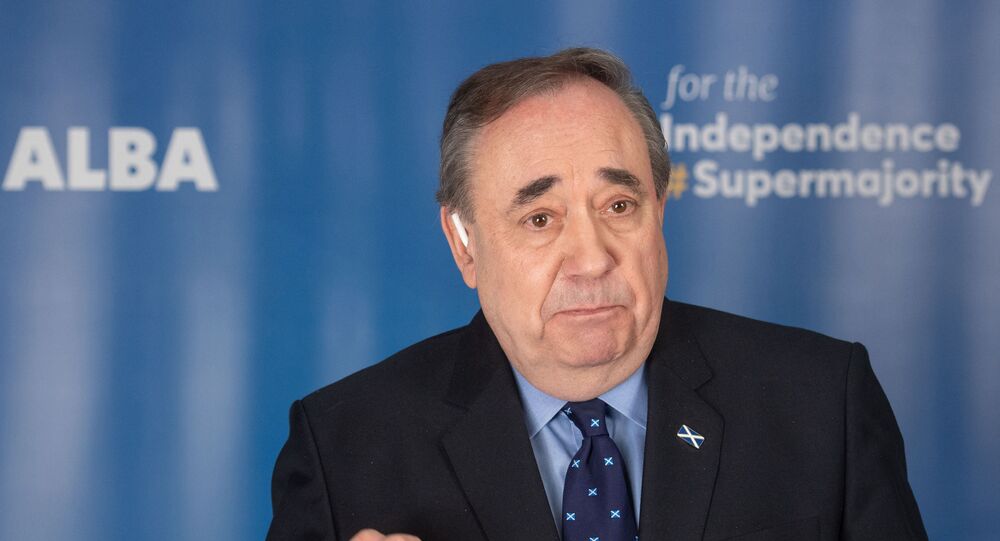 First Minister Nicola Sturgeon and her predecessor, leader of the Alba Party Alex Salmond, have been sparring ahead of the May parliamentary elections, which will pit the newly-formed nationalist and pro-independence party against the Scottish National Party (SNP) amid a desperate struggle for a mandate to secure a second independence referendum.

Alex Salmond has riled up his political opponents with what is perceived as an 'anti-English' election video touting his Alba party.

The 100-second clip broadcast by the former First Minister's Alba party features a monologue by an actor portraying the King of the Scots, who led Scotland during the First War of Independence against England in the 14th century.

Scottish actor and patriot @macfadyenangus, who played The Bruce in the 2019 motion picture 'Robert the Bruce', voices the spirit of The Bruce linking past and present in this endorsement of the ALBA Party. #SNP1 #ALBA2 #SuperMajority #GetIndyDone https://t.co/a7RLkfJb1X

In the soliloquy, heard against the backdrop of scenes of modern-day pro-independence activists, the ‘Warlord’ boasts about 'breaking the spine of English superiority' in a reference to the Battle of Bannockburn in 1314, which marked Bruce's famous victory in the war against King Edward.

The voice in the video claims that the demonstration of 'people power by the sma' [small] folk of Scotland was the straw that broke the spine of English superiority'.

“I know. I was there. I am the Bruce. And here and now people power will prevail again. Alba will unite the clans,” says the King of the Scots in the clip.

The campaign video immediately sparked controversy, with Salmond’s critics slamming it as an ‘anti-English stunt’ ahead of the May parliamentary elections in Scotland.

“The nationalist mask has slipped; Salmond is making it clear that for him and his colleagues this election is a battle between Scotland and England. Their campaign is 700 years out of date. They talk of uniting Scots against ‘English suppressors’ which voters will find pathetic and divisive,” Pamela Nash, chief executive of campaign group Scotland in Union, was quoted by The Telegraph as saying.

Nash added that pushing the narrative that the May Holyrood election is 'a battle between Scotland and England' is 'pathetic and divisive'.

Shadow Scottish secretary Ian Murray decried the 'unpleasantness of Alex Salmond's mob', which had been laid bare in a video promoting 'hateful division'.

“Scratch the surface of many involved in Scotland's nationalist movement and you reveal the bigotry beneath the surface. We need a Scotland focussed on a national recovery - not this kind of hateful division,” he added.

Scottish Conservative candidate Annie Wells similarly weighed in, and was quoted as saying that Scotland “deserves better than nationalists fighting like ferrets in a sack over who is trying to break up our United Kingdom quicker”.

“With Robert the Bruce on our side the other parties should start to tremble.”

When criticised, he said victory at Bannockburn was a source of 'national pride' and that those attacking its message had 'scant regard for the history of Scotland'.

​However, faced with a mounting chorus of negative comments, he said the victory at Bannockburn, referenced in the clip, was a source of 'national pride' and anyone attacking it had 'scant regard for the history of Scotland'.

"People who decry a nation's history will never address a nation's future. If "Scotland in the Union" had been around in the early Fourteenth century they would have been advocating victory for the Plantagenets. Our video featuring one of Scotland's finest actors and directors, Angus MacFadyen, who has himself played Robert the Bruce, twice, is a timely reminder that while his depiction is ever so slightly tongue in cheek it still makes a very serious point,” said Salmond.

The current developments come amid a verbal war of words between Alex Salmond and First Minister Nicola Sturgeon.

As internal divisions have plagued the Scottish National Party (SNP) since former leader Alex Salmond was accused of sexual assault offences, which he denies.

Salmond was acquitted last year, yet he accused the party of attempting to remove him, creating his own pro-independence party.

The ex-First Minister said in a BBC interview in March that his Alba Party will push for Scottish independence by replacing the Scottish National Party (SNP) on regional lists at the Holyrood elections in May. He had added that a pro-independence majority could seek legal action against Westminster if Johnson does not grant a referendum despite most Holyrood officials being elected on that mandate.

The head of the Alba Party attacked the current SNP leader's independence strategy, claiming that her suggestion a referendum will happen in 2023 or later depending on the situation with the COVID-19 pandemic, has generated 'consternation' in the pro-independence movement.

“It seems to be that Scotland will not 'be free until after 2023' – more seriously, it seems to indicate a lack of urgency in bringing the independence question to a decision,” said Salmond.

Sturgeon jousted with her rival via a newspaper interview, claiming UK Prime Minister Boris Johnson will grant a referendum if there is a pro-independence majority.

Following the Brexit referendum in 2016. Sturgeon has been seeking to secure a second vote on Scottish independence, arguing that the results of the first vote, on 18 September 2014 which saw 55 percent vote to remain in the UK, was influenced by former Prime Minister David Cameron vowing that Scotland would remain in the European Union.