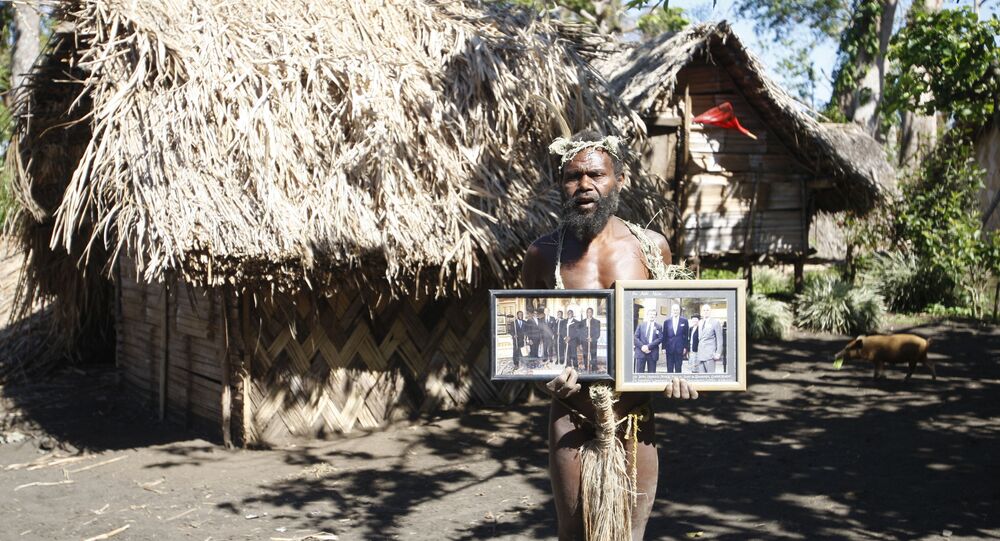 The Duke of Edinburgh, the husband of Queen Elizabeth II, passed away on 9 April at the age of 99, two months before his 100th birthday. Scores of world leaders have since paid heartfelt tributes to the royal and praised his remarkable service to his country and the Queen. His funeral will take place on 17 April at St George's Chapel, Windsor.

Prince Philip's passing has been described as a moment of great national sadness for the United Kingdom and the Commonwealth, but for a small tribe living on the island of Tanna in Vanuatu his death is especially tragic as they believe that the royal is a divine being.

© AP Photo
Till Death Do Us Part: 74-Year-Long Love Affair of Queen Elizabeth and Prince Philip
The Prince Philip Movement originated in the 1950s and is based on a local legend, which says that a spirit from Tanna in the form of a white man would travel overseas to fight in a war and then marry a powerful woman, before returning to them. Prince Philip was born in Greece and then came to Britain, where he joined the military and fought in the Second World War. And as for the powerful woman… he did marry one.

It is believed that when British colonists came to Vanuatu members of the tribe saw a picture of the Duke of Edinburgh and concluded that he was the incarnation of the Spirit. Each year, they celebrated his birthday with dancing and taking the ceremonial drug kava.

Their beliefs strengthened when the royal himself visited Vanuatu and met with members of the movement.

"I saw him standing on the deck in his white uniform and I knew then that he was the true Messiah", said Chief Jack of the Yaohnanen.

Prince Philip gave members of the tribe his picture, while they presented him with a pig-killing club, which he took to pose for a photo.

My thoughts go to the Katsom people of Yaohnanen who founded the religious sect 'The Prince Philip Movement' #PrincePhilip pic.twitter.com/LW1YtDxWVR

"The Prince Philip Movement is a religious sect followed by the Kastom people around Yaohnanen village on the southern island of Tanna in Vanuatu. It is a cargo cult of the Yaohnanen tribe, who believe that Prince Philip, Duke of Edinburgh is a divine being." pic.twitter.com/JqxUf5j89i

​They met again in 2007 when five people from the tribe participated in a UK television programme called "Meet The Natives", which shows tribal men visiting Britain and living there for several weeks with British families. Prince Philip met with members of the tribe in Buckingham Palace.

In 2007, five men from the Prince Philip Movement were able to travel to Britain and meet Philip in person.

A photo of that meeting is still kept in the village. pic.twitter.com/1qb8QSbPO0

"They had to send messages to the yam garden to get the people back and when the chief (Charlie) came and everyone found out. They were very, very sad. The men were silent and looking down. Many of the women were very emotional and crying a lot", said Mary Niere, an accountant at the White Grass Ocean Resort and Spa.

Reports say the tribe will mourn Prince Philip's death with ceremonial dancing and whailing, the latter could last for weeks. However, the group believes that Prince Philip's spirit will never die and will return to Tanna.

One hopes that this will not come true because the Duke of Edinburgh himself said that his reincarnation would be quite sinister.

"In the event that I am reincarnated, I would like to return as a deadly virus, to contribute something to solving overpopulation", Prince Philip once said.

Remarkable Service to the Country

Prince Charles has become the latest person to pay tribute to the Duke of Edinburgh. Speaking from his home in Gloucestershir, the eldest son of Prince Philip said his father was "a very special person who would have been amazed by the reaction and the touching things that have been said about him".

© REUTERS / POOL New
Andrew Marr’s 'Ignorant' Comment Compares Prince Philip to ‘Indian Bride’
His statement echoes heartfelt tributes that have been pouring in from all across the globe for the Duke of Edinburgh. US President Joe Biden called the royal "a heck of a guy" and praised his bravery during the Second World War as well as his attempts to improve the environment. "99-years old, he never slowed down at all, which I admire the devil of", President Biden said.

Russian President Vladimir Putin said Prince Philip "rightfully enjoyed respect among the British and internationally" and wished the Queen "courage and mental fortitude in the face of a grievous and irreparable loss".

Other world leaders praised the royal for his remarkable service to the country and the Queen.

His funeral will be held on 17 April at St George's Chapel, Windsor and due to coronavirus restrictions will only be attended by members of the Royal Family. Upon his wishes, there will be no state funeral and no lying in state, where members of the public would have been able to pay their respects. Members of the public have been asked to make a donation to charitable organisations instead of leaving bouquets of flowers in memory of the Duke.