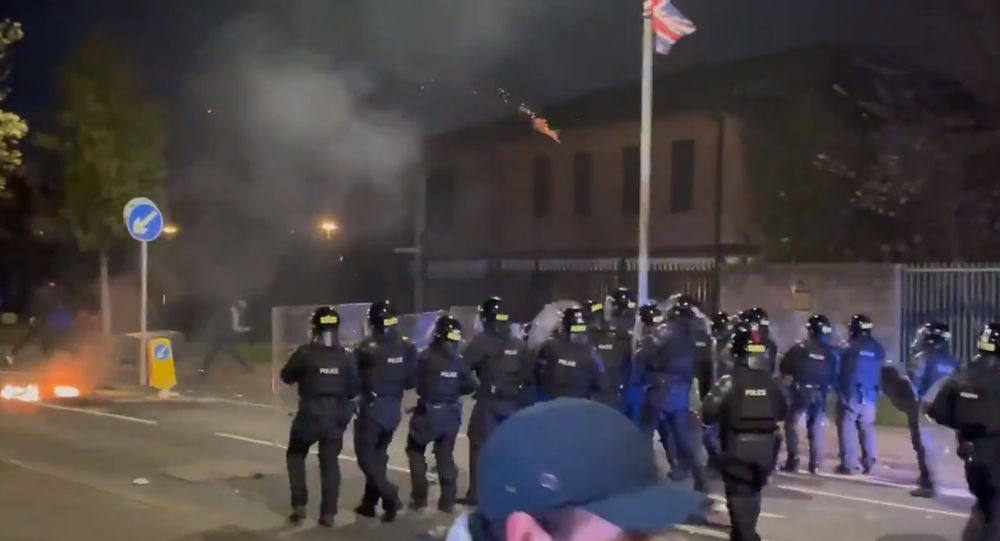 The incident took place in downtown Belfast despite the loyalists’ intention to stop protests over the death of Prince Philip. In others parts of the city, the situation remains stable.

Footage that shows protesters clashing with the police officers and attacking them with stones emerged online.

Not everyone has decided to stay off the streets out of respect for Prince Philip - @PoliceServiceNI under attack from bottles and missiles in the loyalist North Queen St area #belfast pic.twitter.com/lekCTqeiTp

#Coleraine in the last few minutes. Hundreds of youths have gathered in the area.

​Another video allegedly shows a hijacked car being pushed toward the police lines.

​According to some pictures, police used water cannons against the protesters.

​Some forms of protests even caused giggles from netizens, with the video of an elderly man throwing stones at police vehicles becoming viral.

A more immediate reason for the protests is thought to be a decision by Northern Ireland's prosecutor's office, deciding not to punish nationalists from the Sinn Fein party for their June 2020 presence at the funeral of a former Irish Republican Army (IRA) member, despite strong restrictive measures against the spread of COVID-19. The commemoration of the dead is said to have exacerbated the conflict between loyalists, who support unity with the UK, and republicans, who seek independence.

On 8 April, Irish Prime Minister Micheal Martin and UK counterpart Boris Johnson called for calm and dialogue, with both asserting that “violence is unacceptable."