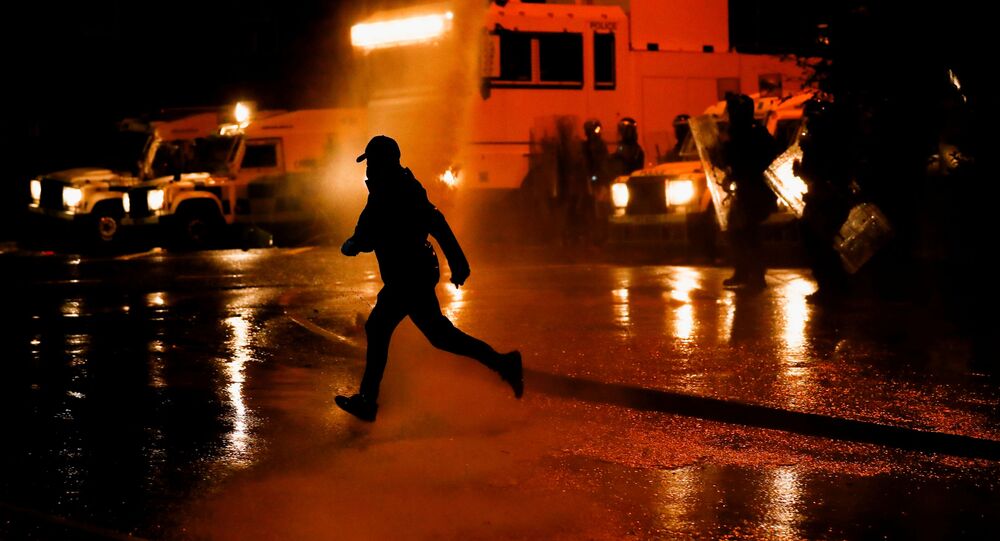 The protests in Northern Ireland began a week ago, after the authorities refused to prosecute 24 Sinn Fein party members for breaking pandemic restrictions, and for attending the crowded funeral ceremony of an IRA veteran in summer 2020 - during the first wave of the pandemic.

Police dispersed protesters with water cannons in Belfast, as the mass rallies in the loyalist districts hit the British enclave for the 7th consecutive night. At the same time, the crowds were reportedly throwing fireworks and stones at officers.

​The controversy started last year, as over 2,000 people attended the funeral of Bobby Storey - a veteran of the Provisional Irish Republican Army (IRA), which has been fighting for separation from the United Kingdom. The ceremony was also attended by politicians from the republican Sinn Fein party, including Deputy First Minister Michelle O'Neill.

However, last week the prosecutor's office announced it won't charge people for breaking the COVID-19 restrictions, which led to a major outcry amid the loyalists' ranks. All the main pro-British parties - the Democratic Unionist Party (DUP), Ulster Unionist Party (UUP), Traditional Unionist Voice (TUV) and Progressive Unionist Party (PUP) - called for the resignation of the PSNI's chief constable, while many citizens hit the streets, clashing with the police.

#BLM #belfastriots #PortlandRiots #ALM #Proud people of thier country were they born.Think it's well overdue for Goverments start listening to the people seriously hearing them.Not what its morphed into govt telling you what to do and they are superior No the people are superior! https://t.co/yvJPI3Odyh pic.twitter.com/0WAzfhzr6d

At the same time, the unrest is stirred up by concerns many people share over the Northern Ireland Protocol (a part of the Brexit deal between London and Brussels), as various goods now require additional checks and certifications to be shipped to Northern Ireland from other parts of the United Kingdom.