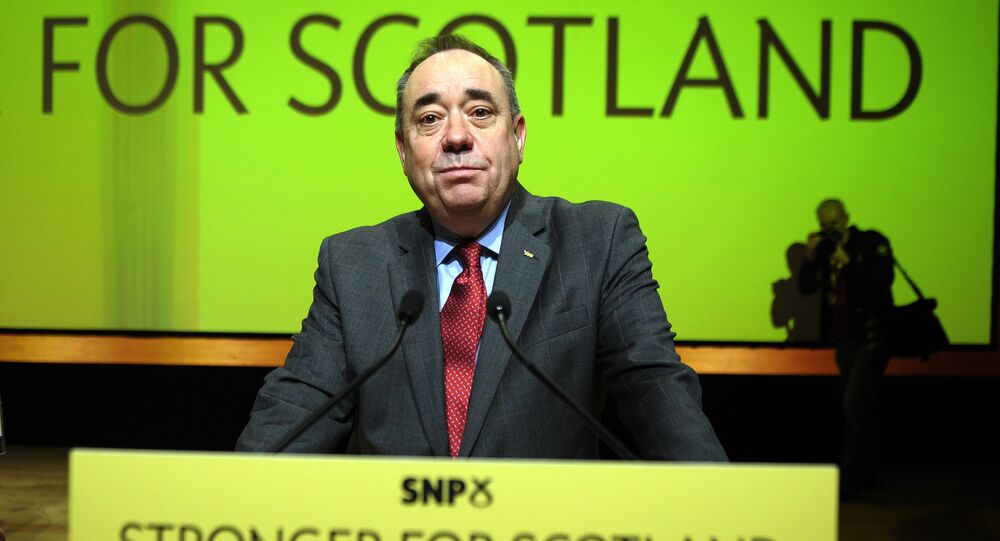 In 2018 the British government accused the Kremlin of attempting to poison former Russian intelligence officer Sergei Skripal, who was convicted in 2006 of spying for the UK. The Russian authorities have categorically dismissed the accusations.

Former First Minister of Scotland Alex Salmond has been accused of "spinning Russian propaganda" by fellow MPs following his remarks about the Salisbury poisonings. During an interview on the BBC, the politician was asked whether he thinks the Kremlin was behind the alleged chemical attack on Sergei Skripal and his daughter Yulia in England. Salmond, whose political talk show has been broadcast by Russian state-media network Russia Today (RT) since 2017, gave a rather murky answer.

The politician's remarks caused harsh criticism from a number of Scottish MPs and even from members of the Scottish National Party (SNP), which he headed from 2007 ad 2014.

"Even Russians believe that Russia was behind the Salisbury poisoning … That Alex Salmond can't see or say that plainly shows how remarkably low he has sunk", said Stewart McDonald, SNP's spokesperson for defence.

A member of the Scottish Liberal Democrats, Alistair Carmichael, contended that Alex Salmond's remarks showed he is no longer a respectable political leader.

"Alex Salmond was once hailed as the most effective politician in Scotland, but has now been reduced to an apologist for the Putin regime. He has been paid by the Russian state broadcaster for years, and the result is his change from respected leader to spinning Russian propaganda lines", Carmichael told The Independent.

During the interview on the BBC, Salmond also spoke about his experience working with RT. The former first minister said he never heard a "single word of editorial instruction or even suggestion" and emphasised that his talk show is made independently and only broadcast by RT.

"The programme which you have suggested and segued into my views on international politics because I happen to produce a television programme which is broadcast and produced independently and broadcast on RT is quite an extraordinary thing for another broadcaster to do who should be maintaining people's right to have freedom of expression and produce programmes if they're independently produced and done", Salmond said.

In March 2018, the UK media reported that former Russian intelligence officer Sergei Skripal and his daughter Yulia had fallen seriously ill. A subsequent investigation showed the two were reportedly poisoned with the nerve agent Novichok (newcomer in Russian) that was developed in the Soviet Union. London claimed the attack was carried out by two Russian intelligence officers and was approved by the Kremlin.

The Russian authorities categorically dismissed the accusations and called the evidence presented by the UK authorities "lies". The Kremlin accused Britain of anti-Russian hysteria and said London refused to grant Moscow samples of the nerve agent that was allegedly used as well as access to Sergei Skripal and his daughter Yulia. The Russian government claimed the two men accused of poisoning the Skripals were tourists who went to the UK to see Salisbury and its famous cathedral.

A spokeswoman for the Russian Foreign Ministry, Maria Zakharova, said London was fabricating evidence and emphasised that neither Soviet nor Russian scientists ever worked on the nerve agent Novichok. She said that Britain, Slovakia, Sweden, and the United States were the most likely sources of the nerve agent.

The issue drastically worsened relations between Russia and the West. Britain as well as 29 other countries, including Canada, France, Germany, and the United States expelled Russian officials. Moscow reiterated in kind.