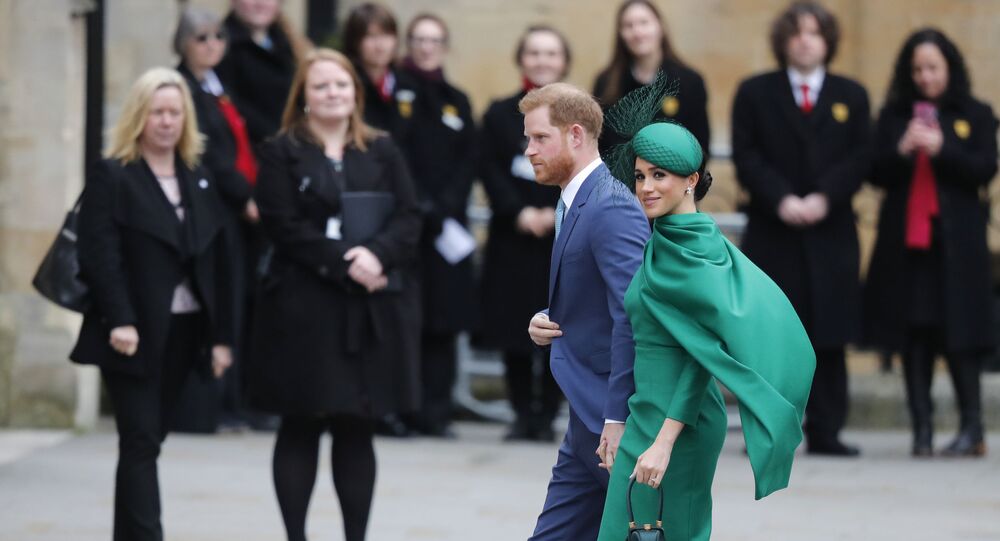 The Duke and Duchess of Sussex alleged during their Oprah Winfrey "tell-all" that "racism" in the British media and lack of support from Buckingham Palace were the main reasons why they decided to ditch their senior royal posts and leave the UK last year. But for some Brits, this move was akin to betrayal, claims royal author Anna Pasternak.

It is very unlikely that Meghan Markle will ever make a return to the United Kingdom, despite initial pledges by the Sussexes to "balance" their life between Great Britain and North America, author of bombshell biographies on the Royal Family Anna Pasternak told Fox News.

"Will Meghan Markle return to the UK? My speculative answer would be no, not if she can help it", the writer believes. "Sadly, I cannot see her ever becoming a loved and cherished member of the Royal Family with the unified respect and adoration of the British people. I think that ship has sailed".

Pasternak says that Meghan Markle's interview with Oprah Winfrey, during which she spoke about her struggles in the Royal Family, a dispute with Kate Middleton, purported concerns about her son's skin tone among royals and suicidal thoughts, was perceived by many as "a total lack of respect for the monarchy" and British people in general.

"Because the monarchy is part of the British psyche", the royal expert alleges, "this monarchy bashing can also be viewed as British bashing. And from personal knowledge, it is understood that Prince Charles, Prince William, Duchess Kate Middleton, and the Queen – they were just so shocked and saddened by [the claims]".

The bombshell claims raised in the interview about the Royal Family, especially some covert allegations of racism, has left the household "reeling", insiders now suggest. The allegations would be addressed "privately" Buckingham Palace said in an official statement that followed the programme.

But many Brits now feel "betrayed" by the Duchess of Sussex, Pasternak says, claiming the general population "absolutely embraced" the non-aristocratic Hollywood star when she came to the UK.

"We embraced this incredible wedding. We were thrilled with the 'Markle Sparkle'. And we were thrilled for Harry, who was our nation's son in a way. We all watched him walk behind his mother's coffin and all of our hearts went out to him", said the expert and author of "Princess in Love", a biography about Diana.

"We loved Harry and we were thrilled for him when he found this beautiful American actress for a wife. We genuinely were".

But as the couple announced in January 2020 that they would be leaving their senior royal positions to start a financially independent life across the pond and then went into "self-imposed exile", the positive sentiment started to fade, Pasternak maintains.

"Not only that, but they criticised the whole thing, which felt like they were throwing it back into our faces", the royal biographer continues.

According to Pasternak, it is absolutely believable that Meghan Markle was naïve about the rules of being a member of the Royal Family and not knowing what "the job" would entail, as she told Oprah in the interview that aired on 7 March.

The L.A.-born actress was probably "too bright and too animated and sharp" for an institution that doesn't favour emotional women who "have an opinion" about things, the expert suggests.

"Powerful women who marry into the House of Windsor don't fare well. If they're emotional and speak out, they certainly don't fare well. It's those who are stoic, go on with their heads down, and do their duty like Kate and Camilla that endure".

If you decide to become a part of the British Royal Family, "you have to remain impartial, apolitical, and just smile", she says – something that Meghan "clearly didn't want" and wasn't able to do.

But in the end, "you cannot confuse celebrity with royalty", Pasternak argues, as duty should always come first for royals.

Will Meghan Markle try to pursue a career in politics or even try to become America's first female president as reports now suggest? It's entirely possible, says the expert, who believes the soon-to-be-mother-of-two "has an ambition that knows no bounds".