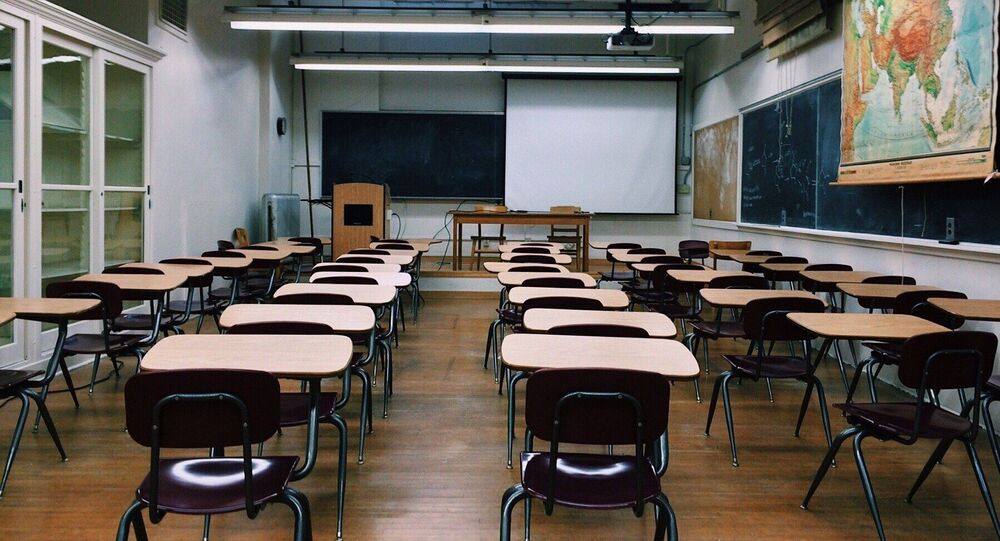 The unnamed British teacher at Batley Grammar School in West Yorkshire had been suspended pending an investigation after reports emerged that he had shown a caricature of the Prophet Muhammad, believed to have been taken from the French satirical newspaper Charlie Hebdo, during a religious studies lesson.

Nearly 60,000 people have signed a petition to reinstate a Religious Education (RE) teacher who was suspended after allegedly showing his class a cartoon of the Prophet Muhammad thought to have been taken from the French satirical magazine Charlie Hebdo.

"Against all odds, students wish to make a statement and reinstate him back as a teacher in Batley Grammar School due to his pure intentions,” reads the statement in the petition, set up by 'A BGS student'.

The unnamed British teacher was suspended pending an investigation after pupils said they had been shown the caricature during a religious studies lesson.

A blasphemy row was triggered, with furious parents converging near the gates of the school in Batley, near Bradford, West Yorkshire, on Thursday and Friday, in response to a message spread on social media. The crowd denounced the administration of the school for ostensibly not taking the issue seriously.

Muslims are protesting outside Batley Grammar School in Yorkshire because a teacher has 'allegedly' used an 'inappropriate' resource during a lesson.

A mob of offended Muslim men have gathered outside the school chanting Allahu Akbar.

Are they there to intimidate or protest? pic.twitter.com/kouV4NlizO

​One of the irate protesters in the town, where Muslims now make up 41 percent of the population, had read out a statement outside the school on Friday, saying:

“The teachers have breached the position of trust and failed their duty of safeguarding, and this issue must be addressed as a matter of urgency. We do not accept that the school has taken this issue seriously, given that it’s taken them four days to merely suspend only one of the teachers involved.”

Gary Kibble, the head teacher, had come forward to extend an apology over the use of the “inappropriate” image.

A spokesperson for Batley Grammar School also apologised, saying that while it is crucial for children to learn about faiths and beliefs, this “must be done in a sensitive way”.

National guidelines from the Department for Education, do not particularly elaborate on visual materials on the Prophet Muhammad, saying that RE must be taught according to “either the locally agreed syllabus or in accordance with the school's designated religion or religious denomination, or in certain cases the trust deed relating to the school”.

‘Defending Integrity of All Religions’

Amid the row, a growing chorus of voices demand the teacher be reinstated, with students believed to have launched the petition that is gaining widespread traction on the internet.

The students who started the petition wrote that the cartoons were meant to illustrate a discussion on what racism looks like.

“The RS teacher thought exactly the same, that the truth of racism needs to be shown to the world so that we understand and combat it in every aspect of our lives! We have watched our RS teacher defend the integrity of all religions within classes and we do not and will not believe he is racist in any way!” reads the petition.

The petition also called upon people to make a joint effort to avoid a repeat of what happened to French teacher Samuel Paty.

© AP Photo / Lewis Joly
The portrait of slain teacher Samuel Paty with a black ribbon is displayed Tuesday, Oct.20, 2020 on the steps of the National Assembly in Paris.

In October 2020 Paty was beheaded in a Paris suburb by a Muslim immigrant reportedly acting upon learning that the teacher had showed his students caricatures of the Prophet Muhammad during lessons on freedom of speech.

“He warned the students before showing the images and he had the intent to educate them. He does not deserve such large repercussions… He is not racist and did not support the Islamophobic cartoons in any manner," said the petition.

The cartoons at the centre of the row had been shown in previous lessons by other teachers as part of the integrative studies course, a parent at the school was cited as saying by The Times.
The parent was quoted as adding:

“He’s one of the best teachers at that school . . . young and not racist at all.”

Other parents have been questioning why the school has not done more to defend the teacher, who has since who has apologised, has been forced to leave his home and go into hiding with his family.

Robert Jenrick, the communities secretary, earlier expressed concern about “very disturbing” reports that the teacher had been forced into hiding.

The school’s governors will meet shortly to discuss the cartoons, the teacher’s suspension and how to proceed.

A campaign of Muslim parents and pupils has also been urging a calm and transparent investigation into the incident.

• blasphemy should be taught without use of Islamophobic material
• any & all threats against school and staff are contrary to our values as concerned parents, citizens & Muslims
• dialogue is key (1/2)#BatleyGrammar pic.twitter.com/j06ChxvPnN

​According to a statement by the Batley Parents and Community Partnership, progress had been made with the school, and that they hoped for an “amicable resolution”.