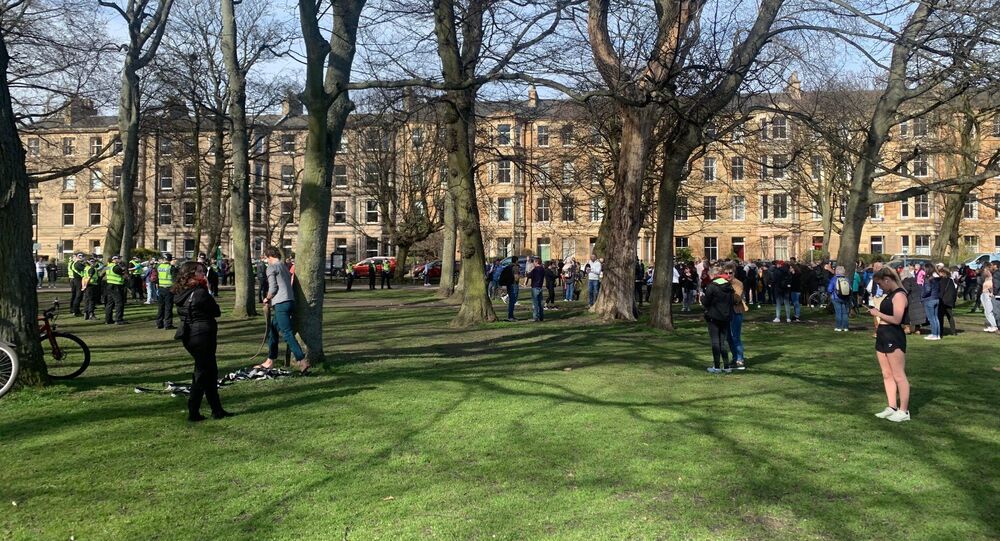 Anti-lockdown protesters took place across London, Berlin, and other European cities. A group of demonstrators in Scotland had organised online hoping to divert police attention towards a fake event outside Holyrood.

Despite last-minute cancellations due to a predicted low turnout, a group of committed anti-COVID lockdown activists turned out in Edinburgh on Saturday to show their opposition to the ongoing restrictive measures in Scotland.

Organising through online forums, the demonstrators took to The Meadows at 1pm in the face of warnings by local authorities not to go ahead with any illegal gatherings.

The small number of protestors who showed up were met with a large deployment of police officers, who had been duped by the online organisers to believe that the demonstration would take place outside of Holyrood - the Scottish parliament building.

​Some members of the small gathering confronted the police officers, shouting that all authorities who had aided in the enforcement of anti-COVID measures were complicit in an "agenda" being pushed by Bill Gates.

Others warned of a "Great Reset" - a conspiracy theory named for a World Economic Forum (WEF) recovery plan, which claims that a "cabal of global leaders has orchestrated the pandemic to dominate the global economy."

In Scotland and across the world, these measures have forced the closing of all "non-essential" businesses and remain in place following the discovery of a new fast-spreading strain of Covid in December.

The government has also issued a stay-at-home order, restricting the gathering of people from more than 1 household. However, as vaccines begin to be rolled out rapidly across the entirety of the UK, national authorities have begun to outline their roadmaps for ending the lockdowns.

Last week, First Minister Nicola Sturgeon announced that non-essential shops, gyms, and hairdressers would be allowed to re-open throughout April.

Scotland’s vaccination programme has issued the first dose of coronavirus vaccine to over two million people  – 44% of the adult population. Confirmed cases and deaths have also dropped rapidly in recent weeks.

On 20 March, Scotland recorded 8 coronavirus deaths and 488 new cases - a reduction of almost 3% since Friday. In total, 7,552 people have died in the country since the beginning of the outbreak, according to figures published by the Scottish Government.

The first lockdown was introduced just over a year ago after the coronavirus began spreading throughout the United Kingdom.

This comes on the same day that thousands took to the streets of Central London to oppose the strict lockdown measures which have been put in place since the beginning of this year.

Demonstrators, including prominent activist and actor Laurence Fox, marched through London's Hyde Park, chanting "stand up, take our freedom back!". As in Edinburgh, the protest took place despite warnings from the police.

© REUTERS / HENRY NICHOLLS
Police officers detain a demonstrator in Hyde Park during a protest against the lockdown, amid the spread of the coronavirus disease (COVID-19), in London, Britain March 20, 2021.

During the event, the Metropolitan Police tweeted that officers had been "engaging with those gathering around Piccadilly and other areas of central London to protest, explaining that we remain in a public health crisis and urging people to disperse or go home".

Authorities warned attendees that coronavirus restrictions do not provide an exemption to attend mass gatherings for the purpose of a protest.

The British government, however, is currently facing pressure from MPs to loosen Covid lockdown restrictions to allow protests to take place.

In the wake of criticism leveled at the London police force last week over their handling of a vigil for the late Sarah Everard, more than 60 MPs and peers have signed a letter warning that criminalising people for protesting is "not acceptable and is arguably not lawful".

Much larger events have taken place across Europe as authorities introduce further restrictions as a response to new cases of coronavirus. From France to the Netherlands, Poland, and Germany, thousands of demonstrators are making their voices heard.

While polling still shows that lockdown restrictions are supported by the vast majority of the population, these displays of objection to government regulations suggest that discontent can spread as quickly as any virus.