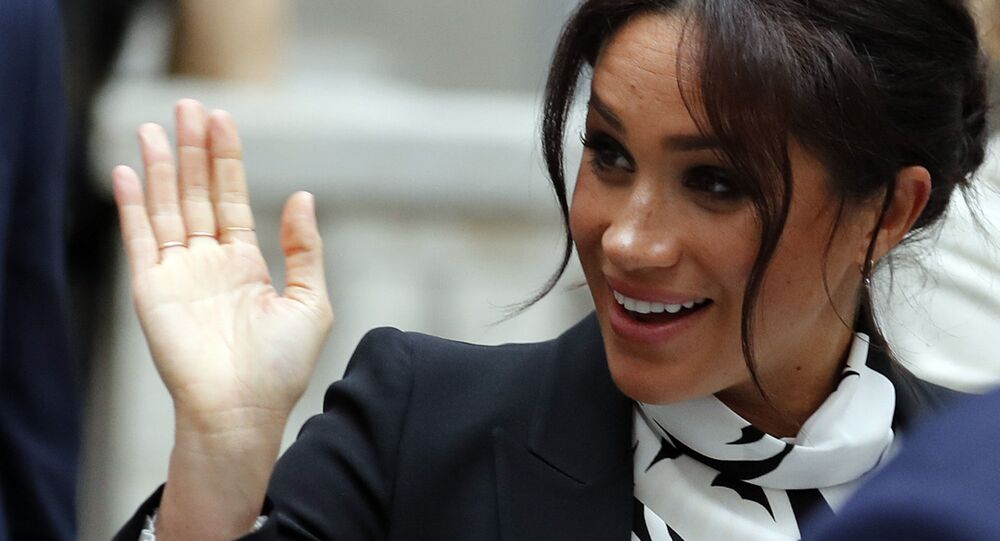 Harry and Meghan's frank chat with US talk show icon Oprah Winfrey has hit a raw nerve with royals, with the Queen, however, taking a measured stance, and pledging a probe, albeit "a private" one, into the claims made by her grandson and his wife.

In a recent episode of "CBS This Morning" Gayle King, a pal of privacy-seeking Meghan Markle and host Oprah Winfrey, who attended the ex-working royal's lavish New York baby shower in 2019, provided a fresh update on Prince Harry and Meghan Markle's ties with the extended family after their bombshell interview with Oprah.

She then went on to speculate, addressing millions of the show's viewers, about the purported internal peace talks running within the family, saying:

"The word I was given was those conversations were not productive. But they are glad that they have at least started a conversation".
The claims have since reportedly caused a fury among Palace chiefs, with the leak ostensibly branded "a shocking breach of trust", as per royal biographer Penny Junor, in light of the Queen's pledge that the Sussexes' claims made in the frank chat with Oprah, including about the royals' alleged racism, would be investigated and "addressed privately by the family".

According to the insiders quoted by The Sun, it was a direct sign of the Queen's intention to keep the internal talks entirely confidential.

On top of this, Buckingham Palace ordered, as suggested by Daily Mail sources, a "three-line whip" banning aides from making any rash public statements about the Oprah chat.

"The Queen has taken a very measured, sensible approach. She is leading by example. This is a matter for her and the family to deal with", a source told the outlet amid the fallout from the interview with the American talk show guru.

Royal author Tom Quinn, for his part, commented that Ms King's remarks must have upset the Palace and the couple had "once again, shot themselves in the foot".

Although the Palace originally appeared to avoid commenting on if Prince Charles or William had spoken to Harry after the chat, according to Ms King, 66, Harry had a verbal exchange with his father and elder brother over this past weekend, but no one has reportedly spoken to Meghan since the Oprah sit-down.

She also shared there was "no word" on whether the Palace was investigating the claims made by the Sussexes, who have now settled down in Santa Barbara after the much-debated "Megxit" and are expecting their second child.

In their explosive chat with Oprah Winfrey, aired on national television on 7 March, Meghan claimed, among other things, of feeling suicidal while in the UK, that their son Archie wouldn't be made a prince, and "concerns and conversations" swirling around even before his birth about "how dark" his skin would be.

She referred to a "George V or George VI convention" that would mean her son Archie would become a prince "when Harry's dad becomes king". Yet, she noted she had been told when she was pregnant that "they want to change the convention for Archie" so he would not be granted the title.

When asked at length by Oprah if there were concerns about her child being "too brown", Meghan replied:

The couple refused to specify who had initiated talks about their firstborn's skin, but Oprah later addressed the issue saying she was told it was neither the Queen, nor Prince Philip. Harry, for his part, took aim at the UK's press blasting it for its "bigotry" and charging that "racism" in British society at large came into play when they were weighing the decision to step down from their senior royal positions.

Half-Sister Claims Meghan Markle's Marriage Will End 'in Divorce', Unless 'Damage' Is Undone