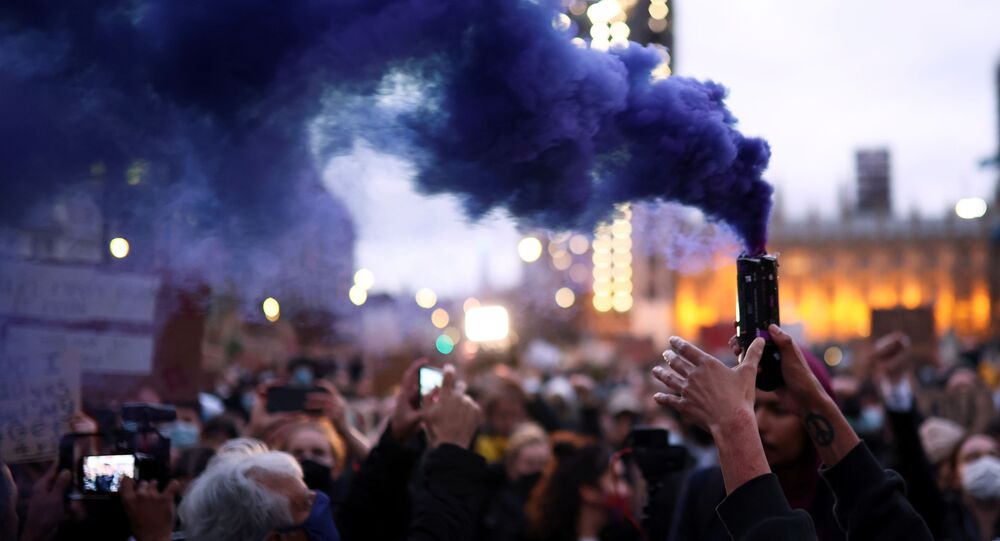 The Police, Crime, Sentencing and Courts Bill would stop convicted terrorists and sex offenders being freed half-way through their jail terms, and also allow sentences up to ten years in jail for those who vandalise war memorials and other public monuments.

The British government's sweeping new crime bill has passed its second Commons vote by a majority of 96 — despite a last-minute Labour U-turn to oppose it.

The contentious Police, Crime, Sentencing and Courts Bill passed easily by 359 votes to 263 on Tuesday night. An opposition amendment was voted down by a similar margin.

Meanwhile, protesters gathered outside Parliament for the third consecutive evening to demand better protection for women in public, following the murder of Sarah Everard. Police officer Wayne Couzens has been charged with the crime.

The legislation will now be debated and possibly amended in the House of Lords before the third and final Commons vote.

Labour leader Sir Keir Starmer made a U-turn at the weekend from his previous position of abstaining on the bill, whipping his MPs to oppose it after the Metropolitan Police forcefully broke up a vigil for Everard on London's Clapham Common where she disappeared.

Prime Minister Boris Johnson's Conservatives seized the opportunity to condemn the opposition for trying to block the bill it says it largely supports.

The bill would change parole rules for prisoners, stopping convicted terrorists and sex offenders from being freed half-way through their sentences.

It would also increase the maximum jail time for those who vandalise war memorials and other public monuments from three months to ten years — although the minimum penalty would be a fine. That prompted claims by Labour MPs that the bill would to more to protect statues than women and punish vandalism more harshly than rape, which carries a sentence of five years to life.

© REUTERS / HANNAH MCKAY
Is It a Fair Cop? Why Campaigners and Activists are So Angry About Priti Patel’s New Policing Bill
And the bill creates a new offence of "intentionally or recklessly causing public nuisance" aimed at groups like Extinction Rebellion, which has disrupted public transport with its protests.

It would also double the maximum sentence for assaulting an emergency worker to two years. And pre-mediated murder of a child would carry a mandatory whole-life sentence under the law.

Sport coaches and religious leaders who abuse their positions of trust to sleep with with 16- and 17-year-olds in their care would also be criminalised, as teachers who do so currently are.

The legislation would also includes the so-called "Kay's Law" to allow authorities to set bail conditions on suspects who have not yet been formally charged. Sunderland woman Kay Richardson was murdered by her estranged husband in 2019 just weeks after he was arrested on suspicion of beating and raping her.