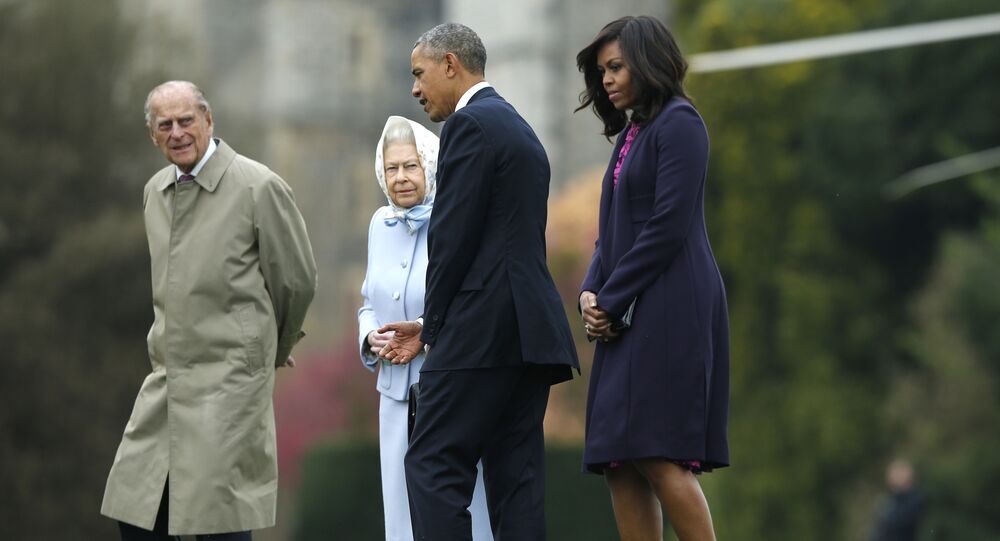 The United Kingdom was one of the most visited countries by the 44th US president. During his two terms, the Democrat visited Britain five times and met Her Majesty on three occasions. It is said that the two enjoy a good relationship.

Queen Elizabeth II broke royal protocol in order to save former US President Barack Obama from an "embarrassing blunder", a new documentary has revealed. According to the "Secrets of the Royals", produced by Channel 5, the incident occurred in 2011 during Obama’s second visit to the United Kingdom.

During a dinner, the then US president decided to make a toast, which coincided with the performance of Britain’s national anthem. According to William Hanson, expert on etiquette and civility, Barack Obama simply needed to say "Her Majesty, the Queen", but instead the 44th president decided to make a speech and made it over the UK’s national anthem. This was a breach of protocol, Hanson says.
The Queen then glanced at the US president several times before she decided herself to break the protocol in order to save Obama.

"That was very kind, thank you", the Queen quickly told him.

Other Violations of Protocol

Incidentally, this is not the first time that Her Majesty has broken royal protocols.

In 1964, she allowed her husband Prince Philip to be in the room when their third son Prince Edward was born, something that was previously not permitted.

In 1998, to the surprise of others, she signed the football of a little boy during her trip to Malaysia. In 2019, she attended the funeral of a palace employee who had worked for the royals for 40 years. Usually the Queen RSVPs "no thank you" to funerals for palace staff, because she reportedly doesn’t want to be the centre of attention.

Royals are not supposed to closely interact with people. This means no touchy-touchy and no kissy-kissy. This also concerns the royals themselves, who are not allowed to show public displays of affection. But in 2009, the Queen was pictured giving a half-hug to Michelle Obama.

Most members of the royal family, including Prince Charles, late Princess Diana, Prince William, and Prince Harry have also been "guilty" of hugging people.

Prince William and Kate Middleton often violate royal protocol when they travel by plane together with their son Prince George. It is not a written rule, but the palace is strongly opposed to heirs of the throne travelling together fearing the monarchy may be gripped by uncertainty if something bad were to happen.

Prince Charles is reportedly the only member of the royal family who is known to have violated the palace's rule on shellfish. The royals avoid eating shellfish dishes because of a longstanding concern about potential food poisoning. However, the Prince of Wales once decided to enjoy the delicious treat and ate several oysters.