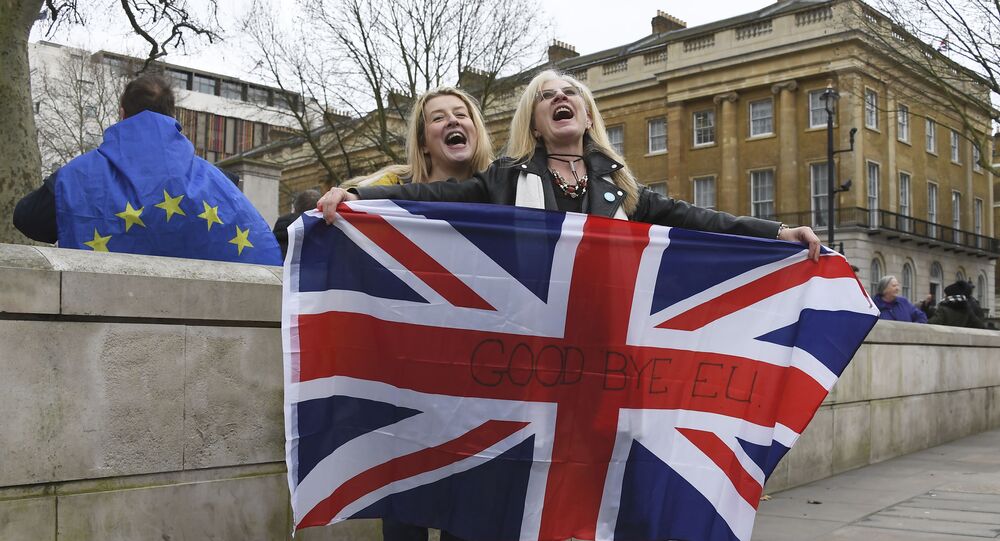 More than half of Britons say they would vote for Brexit if a referendum were held now, regardless of the current economic downturn and red tape problems at the border, according to Savanta ComRes' poll for The Independent.

Savanta ComRes' Friday poll indicated that 39 percent of British respondents believe that the UK's withdrawal from the European Union has so far been bad for trade, while only 18 percent suggested that it's been good. At the same time 37 percent rated Brexit bad for the UK economy versus 25 percent who said its effects have been beneficial for the country. Regardless of the skepticism demonstrated by those polled, 54 percent stated that they would vote to stay out, rather than to join the EU again.

UK's Economic Slowdown is in Line With EU States

Britons have good reason to be concerned over the UK-EU trade and economic indicators as official statistics demonstrated a 40.7 percent fall in sales of goods to the bloc in January 2021. Imports from the EU have concurrently declined by 28.8 percent, according to the Office for National Statistics.

Overall, British exports dropped by 19.3 percent and imports fell by 21.6 percent, ONS reported on Friday, adding, however, that imports and exports started to increase towards the end of January, according to data from gov.uk's "Business insights and impact on the UK economy."

"Despite the negative data, it is not too surprising that the positive view of Brexit still persists," says Giuseppe Bova, senior lecturer in the Department of Economics at Nottingham Trent University. "Given the current pandemic I tend to agree with the caution advised by the Office on National Statistics, but the article does mention that similar decreases did not occur towards non-EU countries, hence one does see an impact of Brexit."

The ONS' data suggests that GDP tanked by 29 percent in January 2021 following growth of 1.2 percent in December 2020. However, the fall in UK GDP is in line with other EU countries, according to the academic.

"We do not see an added Brexit effect to the negative pandemic effect, which is what we see when comparing trade data with EU and non-EU countries," Bova notes.

For comparison's sake, the German economy shrank by 5 percent in 2020 with the government slashing the country's economic growth predictions for 2021 to 3 percent. According to Euler Hermes, Germany's economy is in for "a sharp growth setback in early 2021" after its GDP largely stagnated in the fourth quarter of 2020. Likewise, France is facing negative GDP growth in the first quarter of 2021, "which could be as low as 1.5 percent quarter-on-quarter," according to ING Group. Over 2020 as a whole, France's GDP fell by 8.3 percent.

"Looking at the trade statistics of EU countries, we see that trade did decrease in line with most commercial activities for all countries," says Bova. "This is expected, as it is a global pandemic and hence, the global demand for goods has fallen and we see a general decline in Economic activity."

Judging from the figures, the UK-EU trade slump could be a "teething problem," according to the academic.

"Teething problems with EU trade were inevitable in the first few months following the new arrangements, though fortunately we haven't seen the kind of long queues, chaos and shortages that some predicted," echoes Dr Richard Wellings, acting research director at the UK's Institute of Economic Affairs think-tank.

It is far too early to discern Brexit's impact on trade, according to the British scholar, who believes that the coronavirus "pandemic has also had a major impact on trade over the last few weeks, with restrictions making life difficult for businesses and negatively affecting trade as a result."

"It is reasonable to expect the situation via exports to the EU to improve steadily over the next few months", suggests Professor Alex de Ruyter, regional economist at Birmingham City University and director of the Centre for Brexit Studies. "Certain factors will have made January unusually bad: the need for HGV drivers to obtain COVID-19 tests prior to crossing the channel has undoubtedly exacerbated the situation. Moreover, the new trade situation will take some time to 'bed in'".

© AFP 2021 / ADRIAN DENNIS
Traffic including freight lorries drive under police escort to manage the traffic on the M20 motorway which leads to the Port of Dover at Mersham in Kent, south east England on December 21, 2020, as a string of countries banned travel including accompanied freight arriving from the UK, due to the rapid spread of a more-infectious new coronavirus strain. - Britain's critical south coast port at Dover said on Sunday it was closing to all accompanied freight and passengers due to the French border restrictions "until further notice".

One needs to bear in mind that Brexit is not just about the UK's economy, it's also a political decision, according to Giuseppe Bova.

"Hence, people might be happy to be a little bit poorer but to have a bit more political independence," he suggests.

At the same time, considering the state of the pandemic in Europe and the speed at which Brussels and London's vaccination campaigns are proceeding, "there could be a feeling that having more control over one's own legislation and the country border could be beneficial during a pandemic," Bova presumes.

The EU has been subjected to criticism over its slow COVID vaccine rollout, while Britain has managed to approve and distribute anti-coronavirus jabs to its population at a greater pace than any European state. By the end of February, over 20 million Britons received their first COVID-19 vaccine shot, which became Europe's fastest jab rollout. On 2 March, UK Secretary of State for Health and Social Care Matt Hancock called the country's vaccine programme "a national success story."

"The main benefits from Brexit in terms of trade will come in the longer term, after conditions normalise, when UK firms and consumers will be better placed to source cheaper goods from outside the EU, free from some of the trade barriers and red tape imposed by Brussels," says Richard Wellings.

For his part, Bova deems that it would be interesting to see whether the trade frictions between the UK and EU countries will be resolved and whether the resulting decrease in trade will be compensated through internal demand and supply. It remains to be seen how and when the UK will manage to improve trade relations with non-EU partners, "which from an Economic perspective seemed to be the main goal from the start," according to the academic.

"In the end it will be future generations and historians that can give a judgment on whether it was a good or bad decision seeing how the UK and the EU are going to tackle global problems together," Bova concludes.