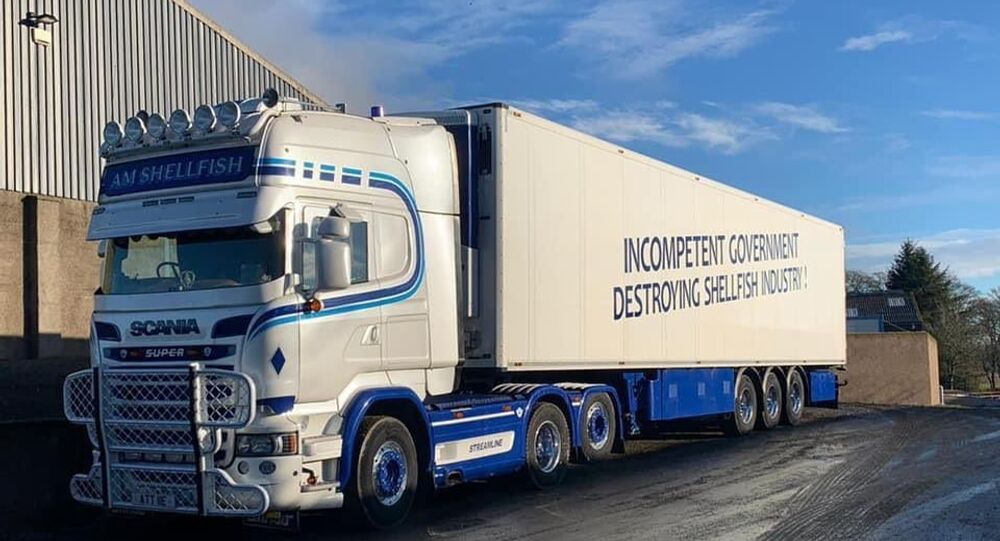 Recent figures show that UK goods trade to the European Union plummeted 40.7 percent in January, according to the Office for National Statistics (ONS), with imports dropping 28.8 percent since new trading rules between Britain and the EU came into force.

In what is suggested as the first sign that blowback from the UK’s exiting the European Union (EU) is starting to register with the country’s voters, new findings show that the majority of Britons believe Brexit has been bad for the economy and trade.

According to new polling for The Independent, carried out by Savanta ComRes, 39 percent thought Brexit had so far been bad for trade, while just 18 percent judged it had been good. 37 percent of those surveyed had rated Brexit as bad for the UK economy, compared to 25 percent who deemed its effects to have been beneficial.

UK voters, according to the poll, have not yet felt the direct pecuniary impact of Brexit, with 26 percent claiming an improved financial position and 18 percent stating they were worse off since the start of the year. Some 36 percent were of the opinion that the UK’s global standing had improved, against 27 percent who thought it had deteriorated.

Some 32 percent blamed the UK government for disruption to trade, against 30 percent who found Brussels culpable, and 27 percent suggesting both sides were responsible for the current situation.

When asked how they would vote, Remain or Leave, if a referendum were held now, 54 percent said they would vote to stay out, while 46 per cent would want to rejoin the EU.

Until they feel a direct financial impact, voters are unlikely to drastically alter their views from the time of the referendum, believes Professor Anand Menon, director of the thinktank UK in a Changing Europe.

“For quite a while there has been a general drift among voters - including Leave voters - towards thinking that Brexit will be bad for the economy. But…there’s still very little evidence for believers changing their minds, which indicates either that they’re willing to take an economic hit for the sake of Brexit, or they think that the sort of economics we’re talking about won’t impact on them.”

The survey results come as official statistics registered the UK’s largest monthly decline in trade with the European Union since records began in 1997.

Data released on Friday showed a drop of 40.7 percent in goods sales to the bloc in January, with experts blaming new post-Brexit red tape for the slump, stating that there were no similar falls in Britain’s trade with non-EU countries. Figures also showed imports from the EU shrink by 28.8 percent.

Some of the worst-hit sectors witnessed massive declines, such as 83 percent in fish and shellfish exports, and 73 percent for live animals.

David Frost, UK Prime Minister Boris Johnson’s Brexit minister who negotiated the Christmas Eve agreement, underscored that pre-Christmas “stockpiling” and “COVID-19 lockdowns across Europe” were the reasons for the decline.

1. I have been looking at today's trade numbers. This month's unique combination of factors made it inevitable that we would see some unusual figures this January. As @ONS has pointed out, caution should be applied when interpreting these statistics.

​“These effects are starting to unwind… Freight volumes between the UK and the EU have been back to their normal levels for over a month now, i.e. since the start of February,” Frost added.

According to the Minister of State in the Cabinet Office, most businesses have already adapted to the changes required to trade effectively with the EU.

However, the recent statements by David Frost were criticised by experts such as David Henig, director of the European Centre for International Political Economy, who warn that economic damage will continue.

“It will take some time for all of the goods and services trade effects of Brexit to become clear. But there is currently little reason to think that forecasts of the order of a 5 percent hit to GDP over a few years are likely to be wrong.”

Suren Thiru, head of economics at the British Chambers of Commerce, said the figures were “an ominous indication of the damage being done to post-Brexit trade with the EU”.

"The practical difficulties faced by businesses on the ground go well beyond just teething problems and, with disruption to UK-EU trade flows persisting, trade is likely to be a drag on UK economic growth in the first quarter of 2021,” said Thiru.

The released figures represent a “major shock”, according to Professor Thomas Sampson of the London School of Economics, who believed that Brexit was “likely to be the primary explanation”.

A measure of ‘bounce-back’ could be anticipated in the coming months after ‘teething problems’ had been dealt with, Sampson was cited as telling the outlet.

Nevertheless, a steady decline was subsequently likely due to new import checks, which were delayed this week until 2022 in a U-turn announced by Michael Gove, the minister for the Cabinet Office.

“If anything like these numbers goes on in the future, it means businesses that were previously viable based on exporting to the EU will no longer be viable and will shut down, and people will lose their jobs,” said Prof Sampson.

According to calculations carried out by John Springford at the Centre for European Reform, Britain’s withdrawal from the European bloc had slashed its total goods trade by £16 bln (22 percent).

My estimates for the impact of Brexit on trade are out. Thread.

​The Office for Budget Responsibility’s forecast seems to echo these views, as it predicted that post-Brexit red tape and the Channel trading chaos it generates will cost the UK economy approximately £2.5 bln in three months, equalling 0.5 per cent of GDP.

#ICYMI The pandemic has dramatically changed the flow of money between sectors of the UK economy, and how this unwinds has potential implications for the pace and sustainability of the recovery.

#ICYMI Our upside and downside scenario set alongside our November forecast remain plausible future paths for the economy.

So rather than updating our scenarios, our new central forecasts published last Wednesday were set against the back drop of our November scenarios. pic.twitter.com/wddHvyU4xc