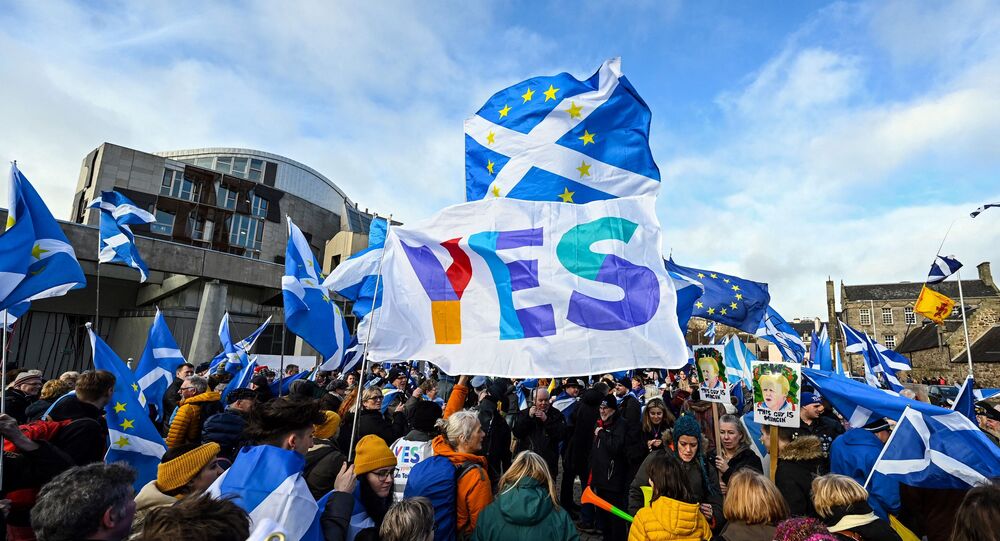 The idea to hold a second referendum on Edinburgh's independence from Britain has been consistently discussed by the SNP ever since the Brexit referendum. Although the United Kingdom as a whole chose to withdraw from the bloc, 62 percent of Scots voted to remain in the European Union.

A majority of Scots prefer to remain part of the United Kingdom, a new poll has revealed. According to the survey conducted by Savanta ComRes for the newspaper Scotland on Sunday, if a referendum on independence from the UK were to be held tomorrow, 46 percent of respondents would say no to Scottish independence, while 43 percent would back it.

However, the poll, which involved 1,015 people showed that if undecided voters are excluded then the gap widens (52 percent back the union with the UK, while 48 percent want independence).

The survey is the first since Scotland's First Minister and leader of the Scottish National Party (SNP) Nicola Sturgeon testified before the country's parliament about the government inquiry into her predecessor Alex Salmond.

The latter resigned from the SNP in 2018 after allegations of sexual misconduct were made against him dating back to 2013, when he was Scotland's first minister. In 2019, he was arrested and charged with 14 offences, including attempted rape. That same year Salmond successfully challenged the legality of the government's investigation into him and won. He was cleared of all charges in 2020.

Salmond claimed the investigation was a plot to unseat him and blamed his successor Nicola Sturgeon for it, a claim she denies.

The survey conducted by Savanta ComRes reveals that the scandal has dented public trust in both Sturgeon and Salmond, with 43 percent of respondents saying they had started to trust the sitting first minister less as a result of the inquiry.

Alex Salmond's ratings are even worse. According to the poll, 57 percent said they believe him less than before the inquiry began.

The SNP pointed out the company itself stated that the survey is "not comparable” to previous polls and "has not been properly weighted".

The party emphasised that Scotland's future will be decided by its people and not "Boris Johnson's Tory Party".

"That is what people across the country are focused on and that is what we will do", the SNP said in a statement.

Referendum on Scotland's Independence from the United Kingdom

In 2014, Scotland held a referendum on its independence from the United Kingdom and 55 percent of voters said they wanted to remain part of Britain. The SNP labelled the vote a "once-in-a-generation" opportunity. But two years later Britain had to make a decision on its membership in the European Union and although the country as a whole chose to withdraw from the bloc, 62 percent of Scots voted to remain in the EU. This prompted the SNP to push for a second referendum, often referred to as Indyref2. The party has argued that the country needs another say on independence because circumstances have changed due to Brexit.

Downing Street opposes the idea. Prime Minister Boris Johnson refused to allow Edinburgh to hold a second referendum, emphasising that Scotland's leaders themselves described it as a "once-in-a-generation" opportunity. At the end of February, Johnson said that UK politicians should instead focus on fighting the coronavirus pandemic and noted that no referendum on Scotland's independence will be held in the foreseeable future.

Brexit and the coronavirus pandemic, however, appear to have swayed public opinion and polls show that more and more Scots support independence. British media outlets reported that the PM has even created a new committee tasked with "averting" Scottish independence.

The SNP previously signalled that it will hold another referendum on independence if it wins the Scottish parliamentary elections scheduled for the 6th of May.

Questions for the First Minister