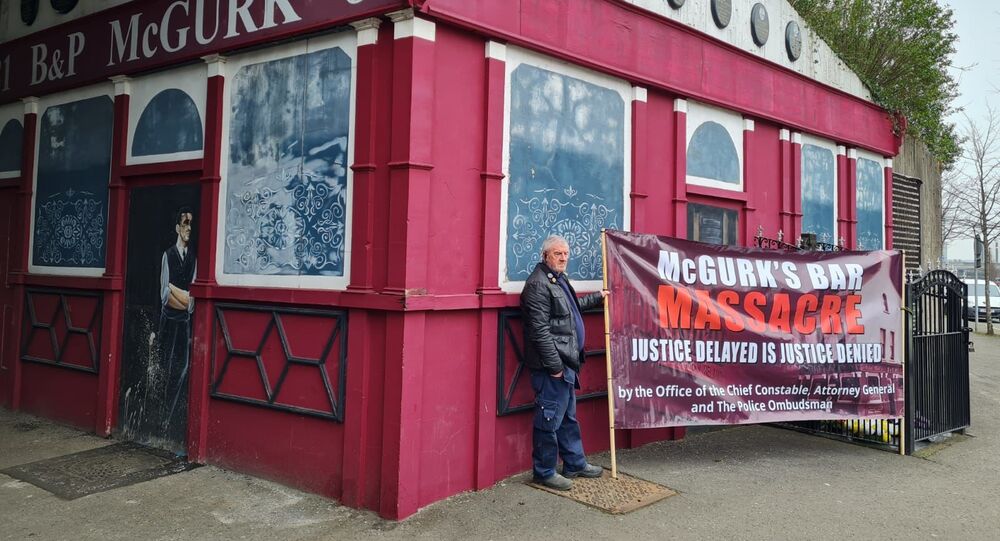 In December 1971, a bomb planted by the loyalist Ulster Volunteer Force exploded in a bar in Belfast frequented by Catholics. Fifteen people died in what was the worst atrocity in The Troubles prior to the 1998 Omagh bombing.

The families of Catholics killed or injured in a blatantly sectarian bombing during The Troubles in Northern Ireland are suing the Office of the Police Ombudsman.

Fifteen people died when a UVF went off in McGurk’s Bar in north Belfast on 4 December 1971 but only one of the bombers was ever brought to justice.

Two serious failures: (1) A failure to complete a 2015 complaint regarding serious allegations against present policing of .@PoliceServiceNI and its deliberate mishandling of its investigation into the #McGurks Bar Massacre /2 pic.twitter.com/qB3tdN50gC

​Among those who died was Maria McGurk, the 14-year-old daughter of the bar’s owners, and schoolboy James Cromie, 13.

Ciarán MacAirt, a researcher who has searched official archives in search of the truth, said: "We have been forced to launch these legal proceedings as the Police Ombudsman wilfully failed to investigate critical evidence in the police cover-up of a mass murder of innocent civilians."

Mr MacAirt said he had unearthed documents which showed the bombing had been wrongly asserted to be an IRA bomb which had accidentally gone off, following “collusion” between the RUC and a British Army brigadier.

He said the British Army had also recorded suspect cars possibly involved in the attack leaving the area after the bombing.

UVF bomber Robert Campbell, the only man convicted in relation to the bomb, was jailed for life in 1978 but was freed in 1993, shortly before the first IRA ceasefire.

How the British Army and Police Lied to British Government About McGurk’s Bar https://t.co/mYQcaJ3QQM via @ciaranmacairt

​The UVF were one of a number of Protestant paramilitary organisations who, as part of the Loyalist Communities Council, have officially withdrawn their support for the Good Friday Agreement in protest at the Brexit deal which introduced a de facto trade border in the Irish Sea.

A statement from the McGurk’s families said they believed there was a “high-level, coordinated and sustained plot by senior members of the RUC, British Army and civil service to deceive two Parliaments about the true circumstances of the bombing and the pro-state perpetrators of the mass murder.”

© AFP 2021 / Paul FAITH
A mural supporting the loyalist Ulster Volunteer Force (UVF) is seen in north Belfast, on the 20th anniversary of the Good Friday Agreement on April 10, 2018.

In 2011, the Police Ombudsman’s office produced a report which said: “The police failure (in 1971) to explore rigorously the allegation that loyalist paramilitaries had been responsible for the bombing of McGurk’s Bar was a serious failure. However, in the view of the Police Ombudsman, the failings in the police investigation fell short of collusion in this instance.”

In 2014, the Police Service Northern Ireland arrested a 69-year-old man in connection with the McGurk's Bar bombing but he was never charged.

The following year the families complained to the ombudsman and asked him to investigate allegations against the PSNI, which it accused of “deliberate mishandling” of a new investigation into the McGurk’s massacre.

​The complaint misfeasance in public office and perverting the course of justice and named the then Chief Constable of PSNI, Sir George Hamilton, and his then Assistant Chief Constable Drew Harris, who has since joined the Garda Siochana in the Republic of Ireland.

Gerard Keenan, who was orphaned by the bombing, and his lawyer Niall Ó Murchú, handed over legal correspondence to Marie Anderson, the Police Ombudsman for Northern Ireland.

Mr Ó Murchú said the families had been extremely patient over the last six years but the Police Ombudsman had “promised much and delivered nothing.”

He added: "Time is running out for this Police Ombudsman. Apology after apology for the delays and failures to date are meaningless now. Her refusal to do her job or deliver on her promises are retraumatising the McGurk’s Bar families."

Four days after the McGurk’s Bar bomb went off a British Army officer, Major Jeremy Snow, was killed after suffering injuries inflicted by rioters protesting at the bombing.