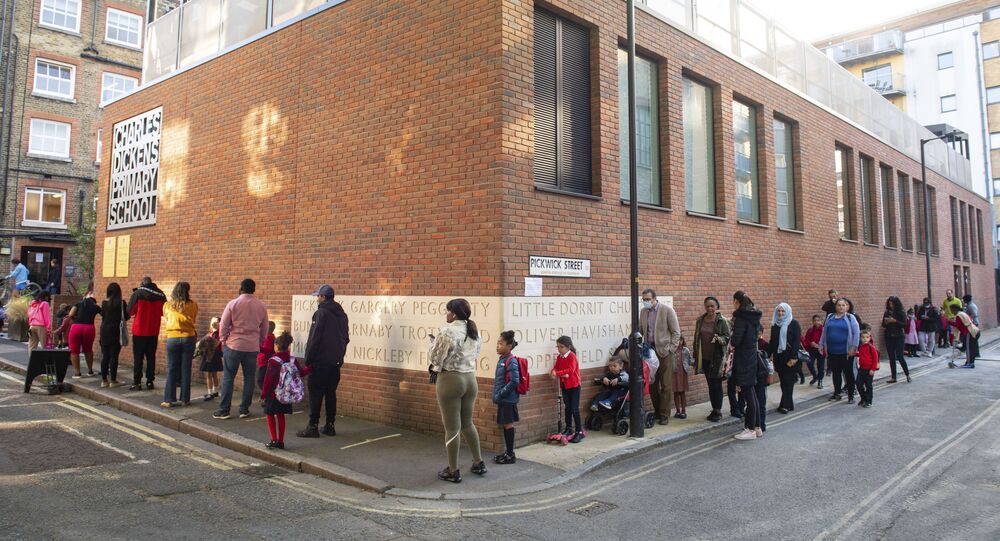 According to a plan elaborated by the Department for Education (DfE) and the Office of Qualifications and Examinations Regulation (Ofqual), trust will be put “in teachers, rather than algorithms” for grading over 1.2 million pupils in England “on what they have been taught”, as exams in the UK are scrapped in 2021 amid the COVID-19 pandemic.

UK Education Secretary Gavin Williamson’s GCSE (The General Certificate of Secondary Education) and A-Level revised assessment process plan, granting teachers sweeping powers to determine grades as exams are cancelled for the second year in a row due to the COVID-19 pandemic, has already come under fire.

Sir Jon Coles, a former director general at the Department for Education (DfE), reportedly resigned from the Ofqual committee last month in disagreement with the new proposal, according to Sky News.

The official had accused the government of being "desperate not to be accused of having 'an algorithm' or of 'exams by the back door'".

In this case, the government is desperate not to be accused of having ‘an algorithm’ or of ‘exams by the back door’. Focusing on this, rather than the actual goal – how we are going to be fair to young people – risks an outcome in August much worse than last year’s.

​In January, Coles went on Twitter to predict that the new approach to grading risked triggering a fiasco 'much worse than last year'.

The government is getting itself in a terrible tangle about assessment and qualifications. In truth, it always spells trouble in making policy when you’re as focused on what *can’t* or *mustn't* be a solution as on the goal you’re trying to achieve.

​Schools minister Nick Gibb, who confirmed the resignation, was quoted as saying:

"He thought that the exam material that we're making available to teachers - the question banks they can use as part of the range of evidence that they'll need to supply to exam boards about how they've devised a grade - he wanted that to be compulsory and mandatory."

Gibb elaborated that the government didn't want questions set by exam boards to be regarded as a "mini-exam", opting for them to be “an option and not mandatory".

On Thursday, as Gavin Williamson prepared to unveil the 2021 grading system in the Commons, ministers insisted their GCSE and A-Level exam replacement plan was the 'best we can do other than exams.'

According to the new plan, to be published by the Department for Education (DfE) and Ofqual, teachers will be empowered to assess over 1.2 million pupils in England “on what they have been taught”, relying on evidence of their choosing.

The latter includes previous essays, coursework, mocks or any other type of classwork, with teachers also able to set their own 'mini-exams', either relying on exam board questions, or using their own. Furthermore, schools will not be required to use previous results as a reference for grading.

As an incorporated ‘whistleblower’ mechanism, teachers’ assessment decisions can be altered by exam boards in exceptional cases where ‘malpractice or questionable standards’ are determined.Students will be entitled to free appeals against their assessed grades, with exam boards arbitrating between evidence supplied by the two sides.

Ahead of the unveiling of the proposed grading plan, already hailed by school teachers, experts warned that a pronounced ‘vote of confidence’ in teachers to determine results risked jeopardising the credibility, while resulting in inflated grades.

Warnings issued by the Education Policy Institute (EPI) pointed to lack of national guidelines on how the new rules would be implemented.

Chair of the Commons Education Committee Tory MP Robert Halfon said inflated marks were 'baked in' and the system will be like the 'wild west'.

There were also predictions of an avalanche of appeals as families in England will have far fewer restrictions on challenges than usual.

Results days for both A-levels and GCSEs have already been moved by Exam board Ofqual to earlier in August to allow for more time to process requests for grade reviews in time for university admissions deadlines.

In summer of 2020, as exams were cancelled due to the coronavirus pandemic, grades in England were awarded after teacher assessments were adjusted via a specially developed algorithm.

As a result, almost 39 percent of England’s A-level results – the qualifications required to get into higher education – were pushed down by one grade or more by the algorithm.
The ‘arbitrary’ results, and the approach seen as ‘penalising more deprived pupils’, while private schools pupils’ saw their results increase under the algorithm triggered an outcry.

The problem appeared to be rooted in the fact that the algorithm moderated results based on the A-level grades from the same schools from 2016 to 2019, based on the assumption that a school was expected to perform the same on average in a subject as it has across previous years.

Yes, I am furious and I don’t mind admitting it. I cannot bear to see young people from working class backgrounds shafted on an industrial scale by an elitist education system more concerned with grade inflation than fairness and social mobility. #LevellingDown https://t.co/XoXAKCqKSm

​The approach appeared to have punished students from lower-ranking institutions who did better than their school’s average.

This prompted the Government's U-turn on the exam algorithm, allowing students to use their previous predicted grades instead of the marked-down ones.

However, home schooled and private students fell victim to the developments, as many were left with no grades. As this category of students do not have school teachers, and exam centres do not have enough evidence of their academic level, their university placements were placed at risk. The education secretary, Gavin Williamson, had faced growing calls to resign over the scandal.

UK Government Was Too Slow to Recognise Drawbacks of Grading Algorithm, Scholar Believes