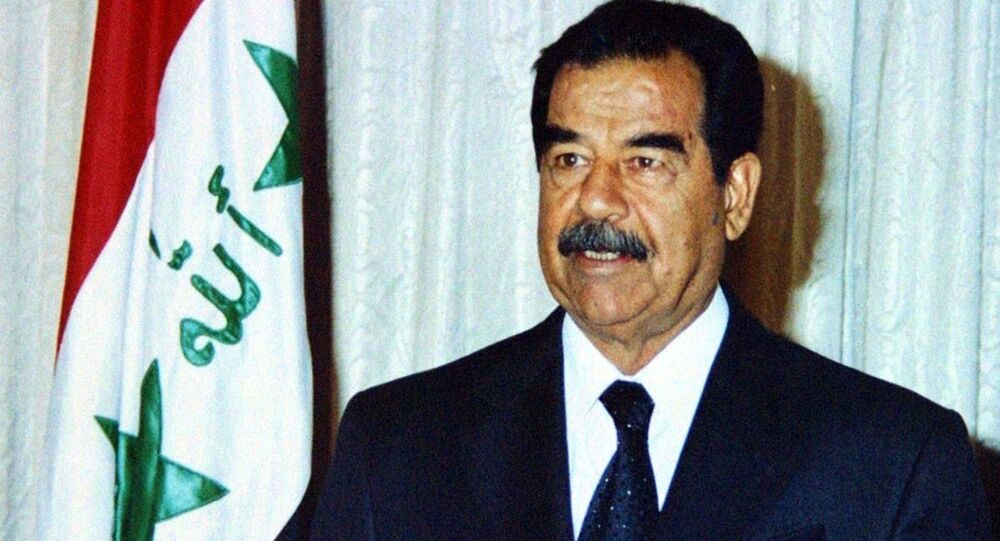 Although Saddam Hussein was toppled from power after a joint invasion by the United Kingdom and the United States in 2003 based on erroneous claims that the Iraqi leader had been developing weapons of mass destruction, years before, London and America had been selling arms to the regime in Baghdad.

One of Margaret Thatcher's cabinet ministers warned the prime minister not to pursue a campaign demonising Saddam Hussein at the beginning of the Gulf War amid concerns over Britain’s arms deals with Iraq, formerly classified documents show.

Junior minister at the Foreign Office, William Waldegrave, said that “propaganda” against the then-Iraqi dictator was “not difficult to come by”, but he was disinclined to carry out the operation as it would raise eyebrows over British businesses selling arms to the Baghdad regime.

In response to calls by Thatcher to step-up anti-Saddam messages, Waldegrave, whose job it was to set policy about arms sales to Iraq, issued a letter to the prime minister cautioning of “some problem” with her plan and that the campaign could backfire.

“The more the government trumpets Saddam’s atrocities, the more the question comes up: 'Why did you go on doing business with him for so long?'”

He also expressed concern that the move could risk the life of British citizens taken captive by Iraqi forces.

“My own view is that there is really no need for the government to feed the flames of anti-Saddam feeling because they are blazing merrily away in any case," Waldegrave wrote.

The letter, which was held at the National Archives in Kew and released to the public along with other Thatcher files in 2017, shows the foreign minister did not believe propaganda in the UK was a primary concern and instead urged for the campaign to be waged in "the Arab states".

“They do not doubt Saddam’s ruthlessness; that is probably partly why the radicals respect him".

However, Waldegrave does outline the "ruthless" nature of the Baghdad regime after Saddam took power in 1979.

“The [Iraqi] government, with Saddam Hussein at its head, consists of ruthless men who do not hesitate to use violence to suppress any suspicion of opposition.

“The government has subjected its citizens to forced relocation and deportations, arbitrary arrest and detention, torture, disappearance and summary and political executions almost as a matter of course.”

By this point, the 1990 Gulf War had been raging for a fortnight. The Iraqi military invaded neigbouring Kuwait for seven months, deposing the absolute monarchy and annexing the country into part of Iraq.

Kuwait had been accused by the Iraqi government of stealing crude oil from its southern Rumaila field close to the countries' shared border, as a precursor to the invasion.

According to the released memos, Alan Clark, the then UK defence procurement minister, informed Thatcher that the outbreak of the war provided an “unparalleled opportunity” for the UK to demonstrate its military equipment in "'real’  trials" and expand arms sales.

“I have pencilled a list of current defence sales prospects at the start of the crisis. These are now likely to be brought forward and increase in volume if we do our stuff," Clark wrote.

The occupation eventually came to an end after a US-led coalition launched Operation Desert Storm against Iraqi forces in February 1991.

Mr Waldegrave later came under scrutiny by the Scott Report - a judicial inquiry into arms sales to Iraq published in 1996. He was found to have sent 27 letters to UK lawmakers falsely claiming that he had not relaxed guidelines on defence sales to Iran and Iraq after the war between the two came to an end in 1989.

This came amid outrage over Saddam's government gassing Kurdish Iraqis the previous year. Waldegrave agreed the changes to the wording of the arms sale policy would not be made public.

In the run-up top the invasion of Iraq in 2003, Prime Minister Tony Blair and President George W Bush claimed that the Saddam regime was developing weapons of mass destruction. Despite the ultimate initiation of the war, the allegations later turned out to be untrue.

Before the toppling of Saddam's government by US-UK forces, the Iraqi Ba'ath government had been a frequent recipient of western arms.

Throughout the Iran-Iraq war, the United Kingdom and West Germany allowed Saddam's military to use essential equipment that aided in the expansion of Iraq's missile and radar systems.

The United States sold Iraq more than $200 million of helicopters. American, British, German, French, and Chinese companies were also named as having supplied Saddam with the intelligence and material to construct unconventional weapons, a UN declaration revealed in 2002.