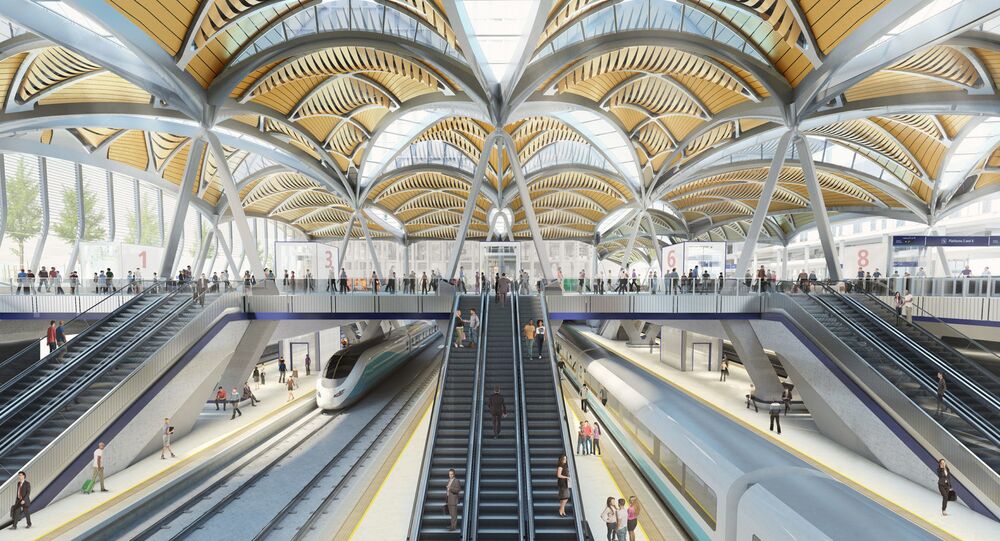 The British government is building a 350-mile long high-speed railway to connect London with Birmingham, Manchester and Leeds. HS2 will support 100,000 jobs but who is building it and how much are the contracts worth?

The first phase of HS2 - linking London and Birmingham - could open in 2028, although cynics point to the delays with the Crossrail project in London and say HS2 is unlikely to be running until 2031 at the earliest.

Critics have called it a "white elephant" and point to a leaked report in the Financial Times last year which estimated the final cost would be £106 billion.

Is that OK with everyone?

​But Boris Johnson’s government believes it will boost the economy and kickstart growth in the Midlands and the North of England.

So who is building the tunnels, tracks, stations and trains?

HS2 Limited has so far handed out contracts worth £14 billion and much of that is for tunnelling work.

HS2 terminates at London’s Euston station and the cheapest option would have been to run it overland all the way to Birmingham and beyond.

MPs give the go-ahead for the next phase of #HS2, accelerating it north. Building Phase 2a from #Birmingham to #Crewe also supports at least 5000 #jobs. Find out how it will benefit places like #Liverpool, #Manchester, #Preston, #Carlisle and #Glasgow. https://t.co/vJtaad7q5m pic.twitter.com/yjBSgfdH4C

​But over the last decade campaigners, including local MPs, have persuaded HS2 and the government to sink the track into tunnels in several significant places.

The first tunnel is from Euston to Old Oak Common - a major junction in the west of London where HS2 will link to the Crossrail tube network - and then it goes underground again through Northolt, before finally emerging near Harefield.

Both the Euston and Northolt tunnel contracts - together worth £3.3 billion - have been won by SCS Railways, a consortium formed by Britain’s Costain, Swedish-owned Skanska UK and Strabag, one of Austria’s biggest construction firms.

#HS2 reveals the first 1st image of one of HS2’s largest construction sites in the Midlands. It's being prepared for the launch of a TBM that will dig under Long Itchington Wood, creating a 1-mile twin bore tunnel, before the route swings into Birmingham's Curzon Street station. pic.twitter.com/9v8aXWEVcw

​A Chiltern Tunnel will take it under the eponymous hills north west of London and then it remains on the surface until it gets to Northamptonshire where it plunges into several green tunnels, so-called because they simply go underground to preserve wildlife on the surface, including Long Itchington Wood.

Align JV - made up of French firm Bouygues Travaux Publics, Britain’s Sir Robert McAlpine and Volker Fitzpatrick - was awarded a £1.6bn contract for the Chiltern Tunnels.

Once the tunnels are built the next step is the building of the track itself and several contracts have been given out for civil engineering work along the route.

A £2.3 billion contract to build the line between the Chiltern Tunnel and Brackley and from Brackley to the Long Itchington Wood Tunnel was granted to a consortium called EKFB.

EKFB is made up of Eiffage Genie Civil - a French civil engineering company which is the fifth biggest in Europe, Britain’s Kier Infrastructure, Dutch-owned Bam Nuttall and Spain’s Ferrovial Agroman.

Arguably the most important of the new stations is the new HS2 terminal at Euston.

Euston station was originally built in 1837 and was the first of London’s terminals to connect it to another city - Birmingham.

The station was rebuilt in the 1960s and updated in 1979 but now looks extremely tired.

As part of the construction of the HS2 terminal large parts of Euston will be demolished and it will be able to accommodate 24 long platforms.

Lendlease - which was founded in Australia by a Dutch immigrant, Dick Dusseldorp - is in charged of the Euston station masterplan, which includes building homes, shops, office space and community facilities around and above the new station.

A Costain Skanska joint venture - which demolished buildings at Euston - has now handed the site over to Mace Dragados, the consortium who will build the new station.

​Mace are a British group who built Mumbai airport’s Terminal Two and upgraded Birmingham New Street station, while Dragados are a subsidiary of the Spanish construction giant ACS, who built the Forth Replacement Crossing in Scotland and much of the Madrid subway.

Other major stations along the route include Old Oak Common - which is being built by a consortium made up of Balfour Beatty, Vinci Construction and the French group Systra - Birmingham Interchange, Birmingham Curzon Street and, as part of the second phase, East Midlands Hub, Leeds New Lane and additions to Manchester Piccadilly and Manchester Airport stations.

LMJV - a consortium of Laing O’Rourke and J. Murphy & Sons - are doing the enabling work at Curzon Street but the £570 million contract to build the new station has not been awarded yet.

Last year, a shortlist was drawn up - BAM Ferrovial, a joint venture between BAM Nuttall and Ferrovial, Mace Dragados and Laing O’Rourke - but the winner has yet to be chosen as there have been delays to the project due to historical conservation work around Curzon Street.

HS2’s Nicola Henderson-Reid said: "Curzon Street station will be the first brand new intercity terminus station built in Britain since the 19th century, and will play a vital role in our regional economy while preserving this important piece of Birmingham’s history".

The most controversial contract will be who gets to build the 54 new trains needed for HS2.

The trains will run at speeds of up to 225 miles per hour and only a handful of companies around the world have a track record of delivering reliable, high speed trains.

Among the bidders for the £2.75 billion contract is a joint bid by Japan’s Hitachi Rail and Canadian-owned Bombardier.

Hitachi is the firm that built Japan’s famous Shinkansen bullet trains while Bombardier have worldwide experience, especially in China.

Hitachi and Bombardier teamed up in 2015 to deliver the Frecciarossa (Red Arrow) ETR1000 high speed train for Trenitalia in Italy.

#DidYouKnow that Derby is the single largest facility in Alstom’s global network of factories. Watch Alstom UK&I’s MD, Nick Crossfield, discuss the importance of Derby in his interview with @IanKingSky on @SkyNews below 👇 pic.twitter.com/eHJHkFwMAU

Bombardier employed 4,000 people in the UK - 2,000 of them in Derby - but last month it sold the business to the French company Alstom.

Alstom is one of the four other bidders for the HS2 train contract, along with Germany’s Siemens and two Spanish companies - Talgo and CAF.

Alstom’s UK managing director Nick Crossfield told Rail Engineer: "Alstom’s vision is to make HS2 trains a timeless design classic, with a passenger experience that is as smooth, calm and spacious as it is high-speed".