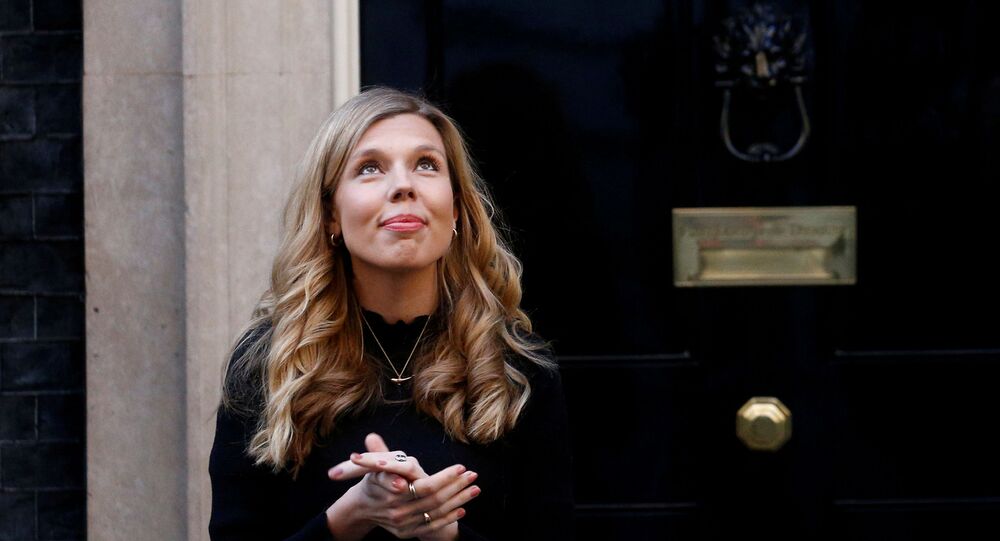 Just a few months ago, the British media cited unnamed sources close to ex-Boris Johnson aide Dominic Cummings as describing the prime minister's fiancée, Carrie Symonds, as "Princess Nut Nuts", and claiming that she had been giving the PM advice on a number of issues, including Brexit.

According to the Daily Mail, the Bow Group called for a "judicial review and government inquiry" into what it referred to as Symonds' "unelected and unaccountable" role.

Harris-Quinney stressed that an urgent investigation was required because the prime minister's fiancée "holds no official role in the Conservative Party or the government, yet consistent reports in the press suggest that Ms Symonds is taking a central role in running the country, without any authority or accountability".

"She has not been elected, she has not been appointed, she holds no legal or constitutional powers to make decisions relating to who should hold government posts", he added, maintaining that "the public takes a very dim view of cronyism… and no one should be running our country without accountability to the people".

The Bow Group also cited claims that Symonds played a role in giving her friend Nimco Ali, a campaigner against female genital mutilation, an official position at the Home Office and booting out No. 10 aides Dominic Cummings, Lee Cain, and Oliver Lewis over recent months.

Lewis, who earlier this week quit his role as the head of Downing Street's Union unit less than a fortnight into the job, is reported to have said his position was made "untenable" by others within Number 10.

There's been much speculation in the media that Lewis' resignation was only the latest example of what is claimed to be Carrie Symonds' expanding power, with the Vote Leave staffers in Boris Johnson's inner circle being cleared out to be replaced by her friends.

The Daily Mail cited a former minister as suggesting that the Bow Group was seeking answers to questions that many fellow Conservative MPs were asking over what exactly was happening in Downing Street.

"My suspicion is that Oliver Lewis is the victim of Carrie's favouritism for Henry Newman. But he's an extraordinarily bright man and very highly regarded in the party. He worked so well with [Brexit negotiator] David Frost so it's not good to see them separated", the minister was quoted as saying.

Harris-Quinney, for his part, alleged that some Tory MPs were "concerned about how Carrie Symonds in particular does not play well in their constituencies".

© AFP 2021 / CHRIS JACKSON
'Mad Queen Symonds Destroys the Court': Cummings' Exit 'Beginning of the End' for BoJo, Media Claims
Boris Johnson's allies, however, snapped back at the Bow Group, suggesting that it was normal practice for a prime minister to consult with his partner, especially given that Symonds used to be director of communications for the Conservative Party.

Senior Tory MP Sir John Redwood, one of the Bow Group's patrons, slammed the call for an investigation as a "very bad idea", telling The Mail on Sunday that "The PM is responsible for who advises him and he is quite entitled to take advice from anybody he likes".

For several months now, No. 10 has been beset by internal power struggles, culminating in the resignation of Boris Johnson's most prominent adviser, Dominic Cummings, in November 2020 which followed the departure of Downing Street Director of Communications Lee Cain.

The wave of resignations by members of the Vote Leave faction was reportedly triggered by Carrie Symonds blocking Cain's promotion to chief of staff. She explained her decision by saying that Cain had ostensibly tried to espouse "macho culture".

At the time, the Daily Mail cited unnamed sources close to the ousted Vote Leave duo, Cummings and Cain, as suggesting that "it's the beginning of the end" for Boris Johnson.

"You can smell it. It's the end of days. It's a story as old as time. The Mad Queen destroys the court", one source said in an apparent nod to Symonds' alleged role in hiring and firing at No. 10.

Back then, the Daily Mail also quoted a source close to Symonds as hitting back at criticism of her alleged influence over Johnson and dismissing it as "rank misogyny".

"The idea that she is a woman and therefore shouldn't have a voice is unfair. The vitriol and bitterness towards her have been quite something […]. No. 10 has been devoid of senior women and the more rounded opinions which they offer", the source maintained.