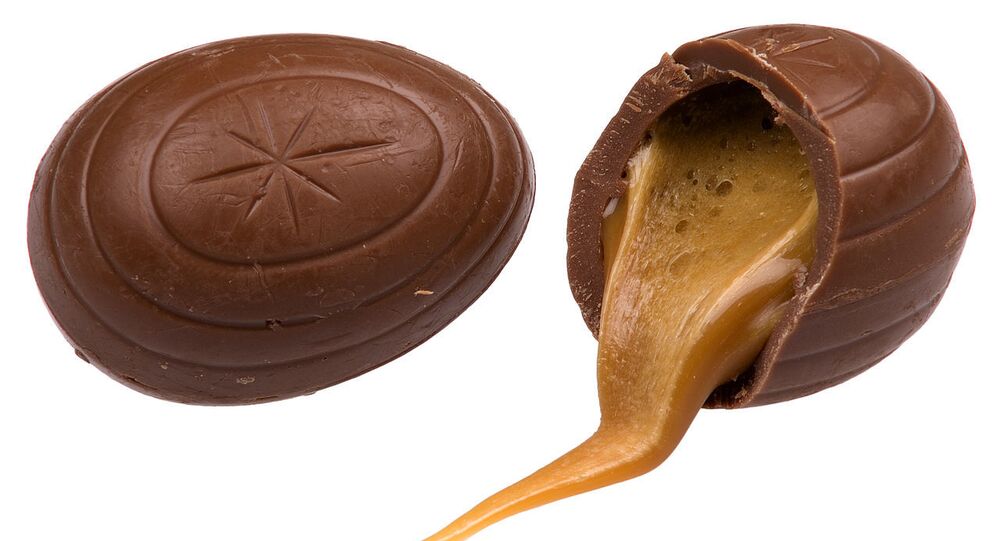 The now circulating ad offers a number of scenes illustrating "a real life couple" sharing – quite suggestively – an iconic cholocate Easter egg by the famous chocolatier, yet many see it not as a display of affinity, but rather an "act of grooming".

Cadbury is getting lambasted by critics on social media, who are calling out the British candy company for what they see as "selling sex to children".

A brand new commercial commemorating the iconic Crème Egg's 50th anniversary and promoting the chocolatier's traditional lineup for the Easter season has struck a raw nerve with many, who deemed the aired shots as way too intimate.

"It's the Crème Egg Golden Goobilee", a voiceover proclaims, before the audience is shown a variety of ways one can eat a Cadbury Crème Egg, with room also reserved for creative word formation:

"Calling all eggshibitionists: Let the eatertainment begin!", the voiceover proclaims, further appealing to fans of the landmark confection and even calling for them to take pretty suggestive actions:

"Lickers, let loose … Discreaters, come out of your shell", the ad continues.

It's the final scene, however, that actually caused a storm, and was the straw that broke the proverbial camel's back: it shows two men passing the candy to each other with their lips before bursting the egg, unleashing its creamy insides.

"Sharers, yea, we are down with that", the narrator says.

The aired ad prompted at least 26,000 viewers to sign a petition demanding the commercial be removed from the air.

"By choosing to feature a same-sex couple, Cadbury's are clearly hoping to cause controversy and escape criticism", petitioners fume, adding that although the ad-makers "claim that any objections must be rooted in 'homophobia'", "members of the LGBT community have also expressed their dislike of this campaign".

The petitioners believe that since children often copy what they see on screen the explicit advert constitutes a form of grooming, as it "exposes children to inappropriate and graphic sexual content".

The authors then proceed to accuse Cadbury of provoking viewers while "seeking to hide under cover of LGBT rights", claiming it intentionally ignored the primary – religious – aspect of Easter.

"Cadbury’s is well aware of the religious significance of Easter. Therefore, they are trying to cause gratuitous offense to members of the Christian community during the most important feast in their calendar", the paper suggests.

Some viewers, although many appreciated the creativeness of the approach, pointed to their distaste for the content, albeit for a very different – and rather cheeky reason.

25,000 people actually signed a petition to have the Cadbury's creme egg ad cancelled. All I can say is, after seeing an advert that embraces love, I’ve never wanted a creme egg more

"I'm DISGUSTED by this. I would NEVER share a Creme Egg with my husband", said one man, whose response was "liked" on the social media platform some 5,600 times. Another commentator dwelled on the same idea, suggesting that it is completely unacceptable that "you should be expected to share your creme egg with another person".

The ad has been running for several weeks now, with criticism alleging it is blatantly lewd starting to pop up from the very start, since its launch. The Mondelez International, Inc.-owned company almost immediately defended the ad campaign.

You’ve seen the Cadbury’s creme egg ad, no? It’s not sex but it’s still a lewd act that a lot of people found repulsive

"Cadbury has always been a progressive brand that spreads a message of inclusion, whether it is through its products or brand campaigns", the company said in its written statement.

"We are proud of our Golden Goobilee advert which celebrates the many ways that everyone can enjoy a Cadbury Creme Egg. To illustrate this and showcase the joy our products bring, a clip of a real life couple sharing a Cadbury Creme Egg was included in the advert".

A counter-petition has since been launched, with the authors suggesting that the ad should by no means be banned, but amplified instead, praising it as a series of scenes that essentially show two people who are in love. The authors cited an example of another Cadbury ad, from 1992, which shows a woman pampering herself with a Flake bar while in the bathtub.

"Millions of us were brought up with the image of a woman deep throating a flake in a bathtub. Was there any outrage? Of course not", they explained.