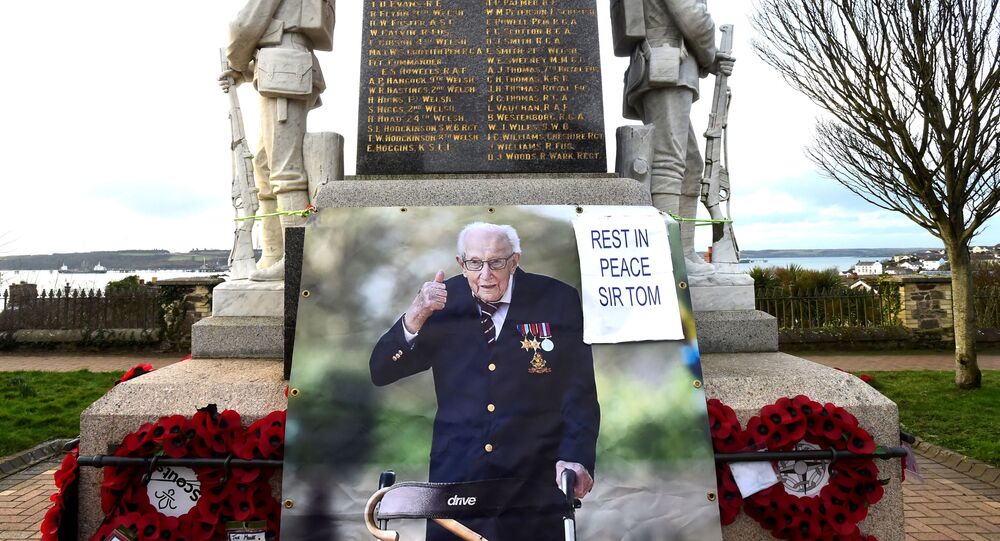 Earlier in February, a Lanarkshire man was arrested by Scottish Police after he allegedly posted an "offensive" tweet about Captain Sir Tom Moore, the 100-year-old Second World War veteran and NHS fundraiser who died recently.

A man who was arrested for allegedly writing "grossly offensive" tweets about the late Captain Sir Tom Moore has denied the accusations made against him.

Joseph Kelly, 35, from Glasgow, did not appear in Lanark Sheriff Court on Wednesday, but his legal representative Archie Hill pleaded not guilty for him.

Kelly is accused of posting a "menacing" Twitter post on the day after the war veteran's death. Prosecutors described the tweet as "grossly offensive" and of an "indecent, obscene or menacing character".

© AP Photo / Peter Morrison
Man Charged by Police After Posting 'Offensive' Tweet About Captain Sir Tom Moore
The Walter Mitty Hunters Club, an organisation that exposes fraud against former members of the services online, said they were "appalled" upon having Kelly’s comments reported to them.

"Despite his best efforts to lock down and hide his comments, we were able to quickly track him down and identify him. The fact he tried to hide his comments and himself so soon after posting demonstrates he knew his actions were wrong and disrespectful.

"There is free speech and there is plain stupidity and an abuse of those freedoms which Sir Tom Moore served his country to uphold," they said.

However, some determined free-speech advocates have criticised the decision to arrest and prosecute Kelly for his alleged remarks.

"Joseph Kelly’s tweet about Captain Sir Tom Moore may have been offensive. But the right to offend is a crucial element of free speech. It should not be the business of the police to protect people from hurt feelings" 🤐https://t.co/ixvocHyAwP

​The Libertarian Party of Scotland said as "insensitive and distasteful as the remarks were, he has a right to voice them".

"Under no circumstances should he be arrested or face charges. I didn't know Sir Tom. But I'm sure he wouldn't have wanted that either", party leader Tam Laird added.

Police Scotland announced Kelly's arrest on 5 February 2021, announcing they had "received a report of an offensive tweet about Captain Sir Tom Moore who died on Tuesday, 2 February".

"A 35-year-old man has subsequently been arrested and charged in connection with communication offences and is due to appear at Lanark Sheriff Court on Wednesday, 17 February."

After the arrest was made public, the move was condemned by a number of parties including actor Laurence Fox. The Scottish Libertarian Party highlighted the "irony" of Kelly's detention as Captain Tom's generation "fought against authoritarian fascism".

Sir Tom's daughter Hannah Ingram-Moore revealed on Wednesday that she actively withheld the "vile minority" of hurtful and offensive comments from her father.

"I think it would have broken his heart honestly if we’d said to him people are hating us. I couldn’t tell him," Mrs Ingram-Moore said, speaking to BBC breakfast.

"Because how do you rationalise to a 100-year-old man that something so incredibly good can attract such horror? So we contained it within the four of us and we said we wouldn’t play to that vile minority, we wouldn’t play to them," she added, noting that their priority was "the massive majority of people who we connect with."

Mrs Ingram-Moore revealed that she had believed her father would survive his hospitalisation: "We thought the oxygen would help, that he would be robust enough, (but) the truth is he just wasn’t. He was old and he just couldn’t fight it," she said.

He became a national icon during the first coronavirus lockdown when he paced 100 laps of his Bedfordshire garden just before his 100th birthday, raising more than £32 million for the National Health Service during the pandemic.

He was admitted into Bedford Hospital on 2 February while being treated for pneumonia. After testing positive for COVID-19, Sir Tom died aged 100.

This comes as the Scottish government is set to introduce controversial new hate crime laws, which are intended to strengthen protections from crimes based on their disability, race, religion, sexual orientation, or gender expression. The legislation seeks to simplify and clarify what is included as a hate crime into a single law and include "stirring up hatred" as a criminal act.

Concerns have been raised over the impact on free speech in Scotland, as "stirring up hatred" could be considered too vague and shut down speech that would not otherwise be considered criminal.

In response to the proposed legislation, the National Secular Society wrote that "citizens have a responsibility to challenge prejudice to ensure Scotland is an inclusive and respectful society. However, criminalising speech is a draconian and ultimately counterproductive means of achieving that aim".

Although the attack against a national hero was certainly met with popular derision and criticism, the decision to make offensive remarks illegal could see other views become subject to conviction, including widely debated topics relating to gender and race.