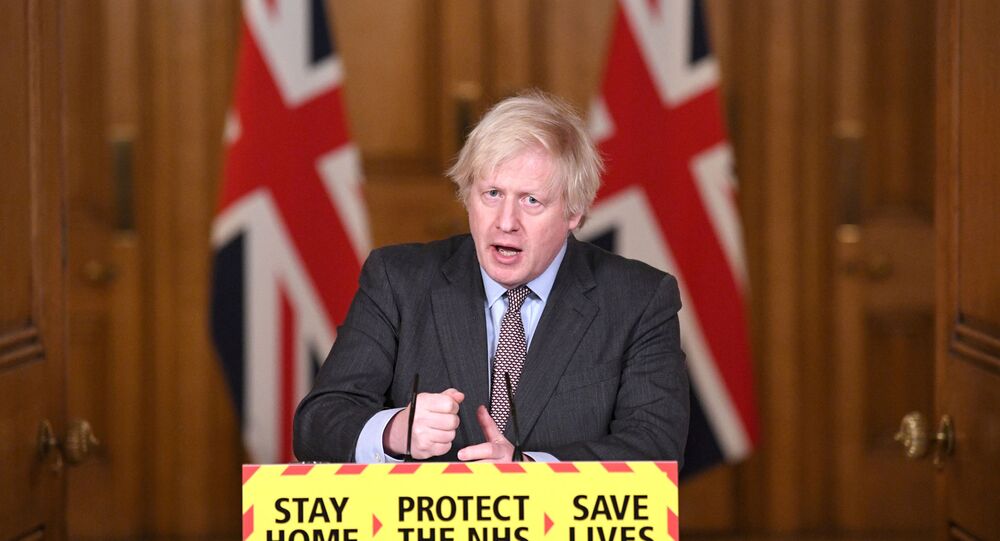 ‘We Need To Know Why That Happened’: UK's Johnson Calls For Full Transparency over COVID Origins

Following the World Health Organisation report on the origins of the coronavirus pandemic last week, Washington has suggested that the conclusions may have been subject to "alteration" by Chinese authorities. The UK has since backed the Biden Administrations' demands for further "transparency".

UK Prime Minister Boris Johnson said during a press conference on Monday that "most of the evidence" indicates that the coronavirus "originated in Wuhan".

"That seems to be where the consensus is at the moment, therefore, we need to see as much as we possibly can about how that might have happened", he said.

"The zoonotic questions that people are asking, I think we need as much data as possible."

​This came in response to a question about the World Health Organisation's (WHO) investigation earlier this month into the origins of coronavirus and allegations of a lack of "transparency" surrounding the initial outbreak.

Speaking to Sky News the previous day, Johnson supported calls by US President Joe Biden for China to provide all available information to the WHO for an investigation into the origins of the pandemic.

The prime minister said "we need to know exactly what happened" and backed the White House's skepticism into the WHO's probe last week.

Boris Johnson has backed Joe Biden's calls for China to turn over all information to the World Health Organization for its investigation into how the #coronavirus pandemic began.

​Biden's national security adviser Jake Sullivan said there are "deep concerns" regarding the WHO's findings and stressed that it is important that the research not be subject to "alteration by the Chinese government".

In response to accusations by Washington over a lack of transparency during the investigation, China hit back on Sunday, saying that the US has already "gravely damaged international cooperation" and was now resorting to "pointing fingers at other countries who have been faithfully supporting the WHO and at the WHO itself".

WHO Investigation in Wuhan

Last Tuesday, following the conclusion of the investigation in Wuhan, China, where the virus outbreak is believed to have begun, the international health body said that while the outbreak was likely to have begun as a transfer from animal to human. However, the specific species of origin has yet to be identified.

"It has not been possible to pinpoint any animal species as a potential reservoir for this disease, and they indicate that currently and also back in 2019 it does not look like there was circulation of the virus in any animal species in the country", said food safety expert Peter Ben Embarek.

According to Liang Wannian, a Chinese expert from Tsinghua University, there is no evidence of COVID-19 in Wuhan prior to December 2019, but it may have circulated in other regions prior to its identification in the city.