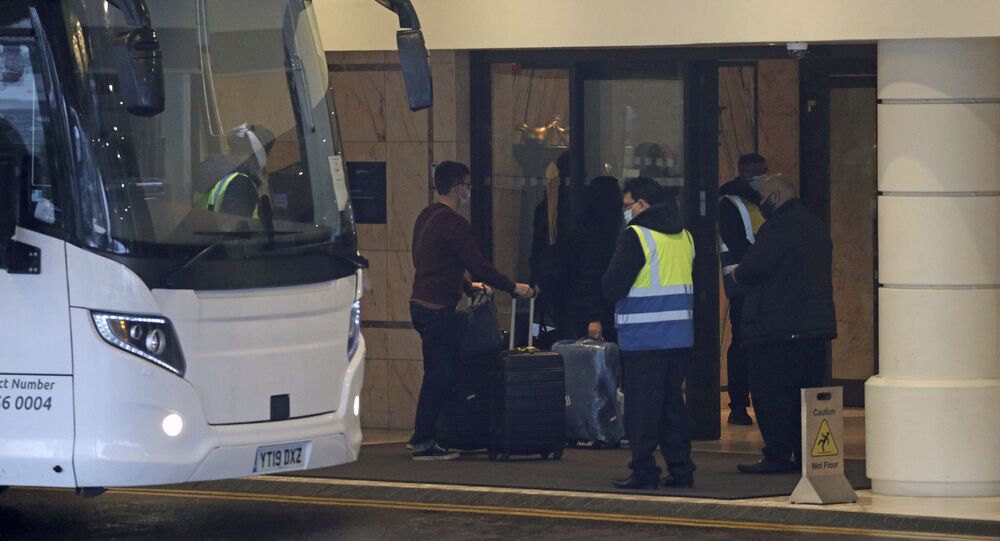 LONDON (Sputnik) - The United Kingdom’s compulsory hotel quarantine rules for citizens arriving from 33 high-risk countries go into force on Monday, but the UK public’s opinion is torn despite the government touting the program.

Health Minister Matt Hancock hailed it as a rule that "will provide another layer of security" against new variants of the coronavirus SARS-CoV-2, while some lawmakers in parliament debated that it may be too stringent and others claimed it was not strict enough.

"I think those rules are OK, because they are the only way to make sure that people are self-isolating after coming from abroad," Margaret, a woman in her 50s, told Sputnik while shopping at a supermarket in east London.

After stressing that "this is not the time to be traveling to other countries in the first place," she said that the more people that follow the COVID-19 lockdown rules, the quicker life goes back to normal.

Julia, whose family lives in red-listed Ecuador, said, however, that forcing people to stay in a hotel to quarantine for 10 days does not make any sense to her.

"If you are coming back to your own country or to your country of residence, it is because you have a place where you can self-isolate upon arrival," she told Sputnik.

She also complained about the cost of the stay, claiming that it would be "unaffordable" to some passengers and said that the National Health Service tracking apps and the Police could be used instead to check whether people are self-isolating at home.

Last week, Hancock announced that starting from February 15, UK and Irish citizens and foreign nationals with residence permits in the UK arriving from countries suspect of having a high prevalence of new coronavirus strains will have to quarantine for 10 days in hotels designated by the government.

Arrivals are told to take a coronavirus test before traveling and buy a quarantine bundle that includes transfer, food, board and testing at the price of 1,750 pounds ($2,434). Those who fail to abide by the rules could face hefty fines of up to 10,000 pounds, an automatic quarantine extension or a jail sentence of up to 10 years.

Leader of the opposition, Keir Starmer, meanwhile, called on authorities to extend the rules to arrivals from all countries, saying that "the government is leaving gaping holes in our defences." The Labour chief pointed out that a majority of the arrivals on Monday were set to avoid compulsory hotel quarantine.

The red-listed countries include those in South America, large parts of southern Africa, Portugal and the United Arab Emirates.