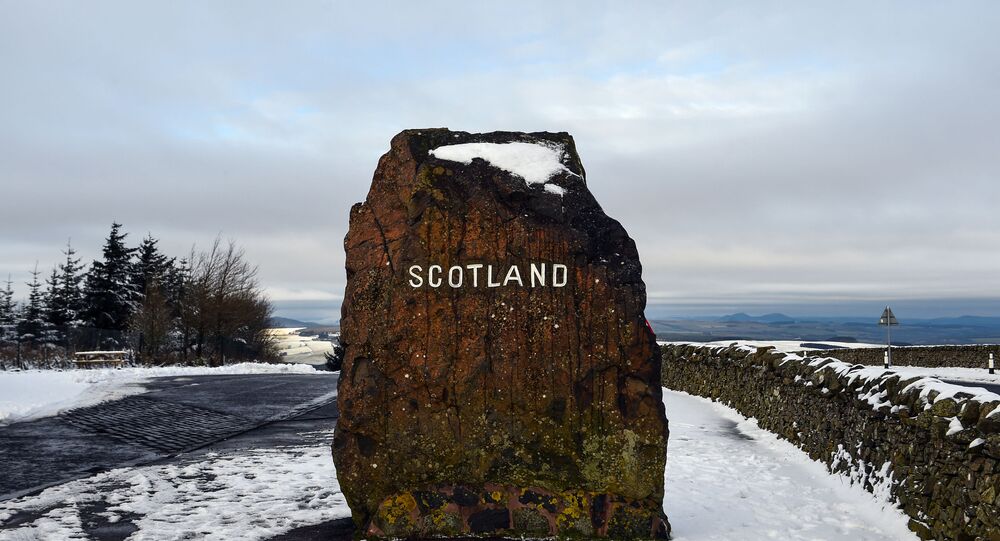 Last week, the UK government announced mandatory hotel quarantining for Britons returning from 33 "red list" coronavirus hotspots that is set to begin on 15 February and will run until at least 31 March.

Scottish First Minister Nicola Sturgeon has announced that local police could be asked to "do more than what they are doing right now" on the country's border with England in order to make sure travellers are not exploiting rules to avoid quarantine hotels.

The warning came after the Scottish government earlier rolled out plans stipulating that every person arriving at Scotland's airports from overseas should quarantine in a hotel for ten days. London, however, said that only travellers to England from a spate of "red list" countries will have to do so.

© AFP 2021 / LESLEY MARTIN
A sign welcomes visitors to Scotland near the town of Selkirk on the border between England and Scotland on September 11, 2014, ahead of the referendum on Scotland's independence.

Sturgeon spoke as Scottish Health Secretary Jeane Freeman referred to the collapse of the two sides' talks to reach a UK-wide deal on quarantine restrictions for international arrivals.

Freeman expressed disappointment over other ministers' reluctance to help track travellers who then go on to Scotland, making it clear that the Scottish government will go ahead with plans for checks at the border.

"It's deeply disappointing that as part of a family of equals, one partner isn't prepared to help the other partner enforce the policy that they think is the right policy for the people they represent", the health secretary pointed out.

She pledged "discussions" on the matter will continue, signalling Scotland's readiness to reach "a four-nation approach to deal with a virus that doesn't respect boundaries and borders".

"But in the meantime, we will work through what the options are to mitigate where the UK government stance creates a loophole. We can't have people coming in, getting on public transport, coming to Scotland and we don't know about that and they are not required to quarantine in [a] way that we can't manage so we have to consider what our options are about that land border", Freeman added.

The remarks came after Scotland's Cabinet Secretary for Transport, Infrastructure, and Connectivity Michael Matheson urged the British government "to adopt [….] a more comprehensive approach, and require all arrivals to go into a quarantine hotel".

"We ask the UK government to work with us to identify international travellers not caught by this approach so that arrangements can be made for them to isolate in a quarantine hotel, in line with the policy in Scotland", Matheson said during a speech to the Scottish parliament.

© AP Photo / Kirsty Wigglesworth
Welcome to the Hotel Quarantine: What We Know About UK Mandatory Self-Isolation Facilities
Under London's new hotel quarantine scheme, anyone travelling to the UK from 33 "red list" coronavirus hotspots will have to stay in a government-approved facility for 10 nights.

To that end, starting from 4 February, the UK government requested hotel owners to provide accommodation for up to 1,425 travellers per day while trying to block-book 28,000 hotel rooms to meet the deadline. The hotel quarantine scheme is due to kick off on 15 February and will run until at least 31 March.

Scotland Could Eliminate Covid-19 by the End of the Summer, Public Health Expert Says