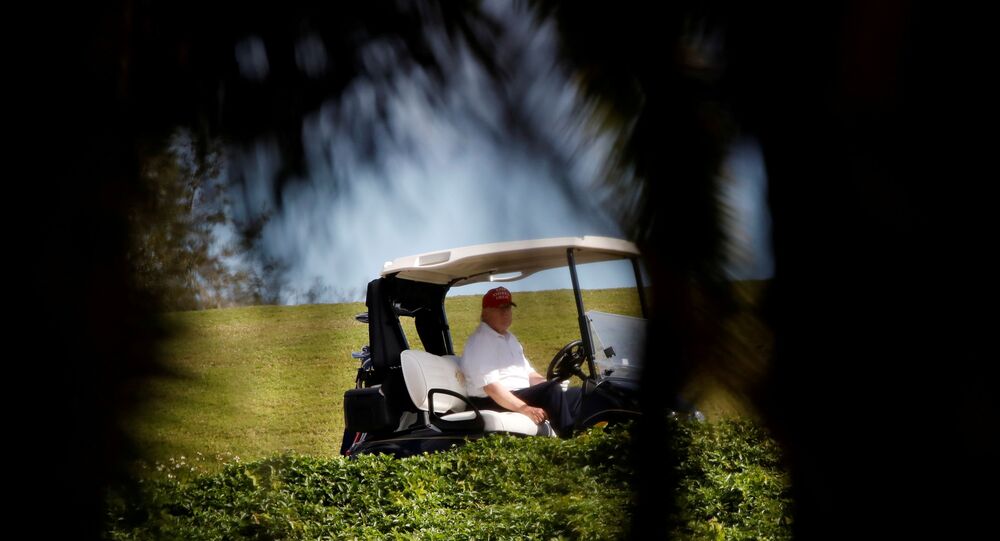 After a failed effort to challenge the results of the 2020 United States presidential election, the 45th president of the United States departed from the White House to Florida estate last month.

Donald Trump "feels happier" in his-post presidency life and is apparently glad his Twitter account was taken down, a top advisor told the Sunday Times.

Jason Miller, who served the former president as a campaign strategist, said Trump is now "truly relaxed" and was reportedly in a "good mood" after leaving office last month.

“The president was in a very good mood upon leaving and there were some very tender moments with his family," Miller told the UK's Sunday Times.

"It was fun to have a front-row seat for that. The emotions ran the entire gamut".

Miller said that some involved were "very sad this day had come, but there was a sense of pride that this was the single most successful first term in US presidential history".

"This was the first time in years that I saw the president truly relaxed", he added.

"Only 45 other people in US history have experienced what it is like to have the world on their shoulders ... and to be able to exhale, knowing that it's not all on you for the first time in four years".

But Miller said that the ex-President has been spending his time playing golf with friends and convenes with a small group of advisors.

He told the Sunday Times that "the president has said he feels happier now than he’s been in some time", that time away from Twitter, and not being "subject to the hateful echo chamber that social media too frequently becomes, has actually been good".

“That’s something the first lady has backed up as well. She has said she loves it, that he’s much happier and is enjoying himself much more", he said.

Miller's comments come despite the former presidents impending impeachment trial in the US Senate.

Addressing the tribunal, the Trump camp is convinced that there is zero chance there will be a vote acquit the president, and he is currently  “far and away the frontrunner” for another White House run in 2024.

"There is no real scenario in which he is going to be convicted, so the pressure is completely off", Miller said.

Trump has not been seen in public since his tenure ended, he left Washington on 20 January but was seen at his Mar-a-Lago estate in Florida with House minority leader Kevin McCarthy.

While speaking to Breitbart the same day, Miller suggested that Trump could kickstart a new alternative social media platform in opposition to major sites like Twitter.

“I would expect that we will see the president reemerge on social media", he said.

“Whether that’s joining an existing platform or creating his new platform... all options are on the table".

He said that a "number of things" were being considered and they were looking into what "avenue makes the most sense".

According to a Daily Beast report last week, Trump was so frustrated after being banned by Twitter that he told allies still on the platform to Tweet on his behalf against his enemies.

The president boasted 88 million followers on Twitter before being permanently banned by CEO Jack Dorsey after he allegedly encouraged supports to storm the US Capitol Hill building.

He reportedly went "ballistic" and hinted he could begin a competitor site.

Earlier this week, the former president issued a statement through his lawyers posted on Gab, an alternative social media platform where he has already accumulated 1 million followers.

Miller worked alongside the president since his 2016 election campaign. He also stood by Trump on his last day in office on Air Force One with First Lady Melania, and his children Ivanka and Don Jr.

Trump did not attend Joe Biden's inauguration on 20 January and instead flew directly to his Mar-a-Lago estate in Florida.