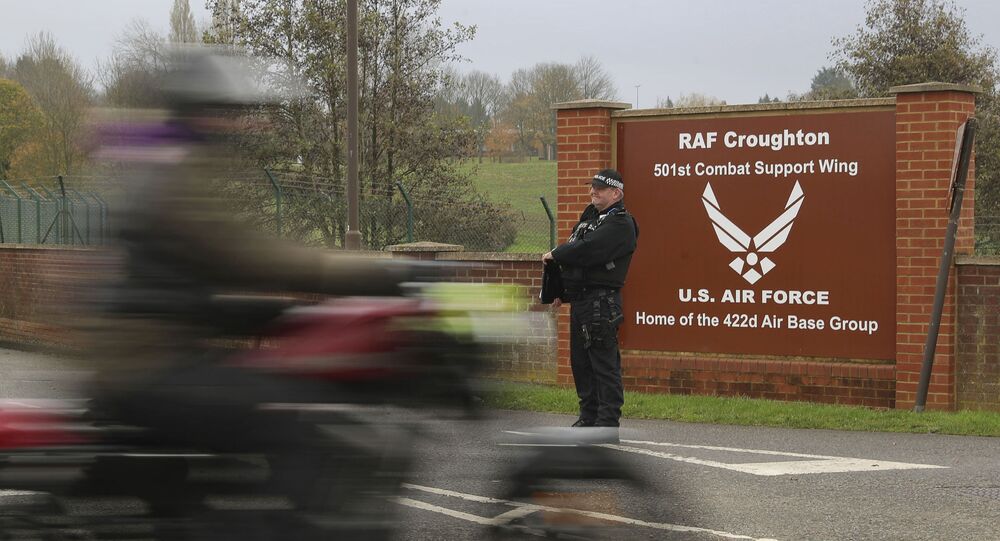 The wife of a CIA operative is accused of killing 19-year-old Harry Dunn while she drove on the wrong side of the road in the UK in August 2019. Anne Sacoolas, who is also reported to be employed by the US intelligence services, managed to avoid criminal charges through diplomatic immunity and subsequently left the UK following the incident.

The US Embassy chose not to inform the UK Foreign Office (FCDO) that American citizen Anne Sacoolas was a spy after she was accused of accidentally killing Brit Harry Dunn by driving on the wrong side of the road, court documents revealed on Sunday.

Instead, officials described the US intelligence worker as the "wife of an embassy employee" in the notes sent to the UK Foreign Office arguing her diplomatic immunity, the court heard.

Dunn's family has subsequently issued a civil claim against Sacoolas.

The case is now being looked into by an American court. The tribunal in Virginia was told that three days after the crash, the US embassy referred to Sacoolas as "the spouse of a member of administrative and technical staff of the Embassy" and failed to disclose that she worked for the intelligence service.

Previously, the court heard that both Sacoolas and her husband Jonathan were employed by the US State Department at the time of the crash and "fled" the UK for "issues of security." According to the FCDO and Number 10, the foreign secretary and prime minister were only made aware of the case after Sacoolas returned to the US.

On 30 August, the US Embassy informed the FCDO that Sacoolas had been granted automatic immunity because she was employed by the embassy, despite the fact she was a suspect in the incident. She left the UK 16 days after on 15 September.

The US embassy told UK officials that "waivers of immunity must always in alignment with the Vienna Convention on Diplomatic Relations and said the UK could not arrest Sacoolas.

The US High Court ruled in Sacoolas' favour at the time of the crash, but the FDCO said it was overlooking her immunity – which it described as an "anomaly" – from last July.

In response to the revelations, the Dunn family has sought clarity over when the British Government became aware of her status as a spy.

"We are all still catching our breath after this astonishing revelation, having believed all this time that Mrs Sacoolas was just a dependant," their spokesman Radd Seiger.

"The starting point of course is that this is not what diplomatic immunity was intended to be used for."

He added that correspondence between the US Embassy and UK reveals that "rather than asking itself what the right thing to do was following the tragedy, the US State Department set about looking for a way to do the wrong thing."

"This note now raises some serious questions," he said.

He also asked why the US authorities were "less than candid with the FCO about Mrs Sacoolas' real role" whilst she was living in the UK.

"When did the British Government become aware of her real employment status?"

He requested to know if Foreign Secretary Dominic Raab knew "on 28 January 2020 – when Harry's father Tim asked him point blank – whether Mrs Sacoolas was working as an intelligence officer at the time of the crash, to which the response was 'She used to work for the State Department'."

​The UK Labour Party has urged Raab to explain himself to Parliament on Friday.

"Dominic Raab told MPs that [Mrs Sacoolas] she was entitled to protection as the spouse of an employee, but new information provided by her lawyer clearly indicates that she wasn't," said Shadow Foreign Secretary Lisa Nandy.

During the hearing when Sacoolas attempted to rebuke the Dunn's civil claim, her barrister John McGavin informed the court that knew why she and her husband returned to the US from the UK, but could not "disclose" the information.

The US State Department spokesman Ned Price reiterated Washington's position on Sunday, saying that at the time of the accident "and for the duration of her stay in the UK, the US citizen driver in this case had immunity from criminal jurisdiction."

"As we have said previously, the driver had diplomatic immunity because she was the spouse of an accredited staff member of the US Embassy office," he said.

Sacoolas returned to the US and claimed immunity after she became a suspect in the death of the 19-year-old, who was killed in the collision outside US military base RAF Croughton in Northamptonshire on 27 August 2019.

Northamptonshire Police later charged the 43-year-old with causing death by dangerous driving but requests by the UK for her extradition were rejected by the US in January 2020.