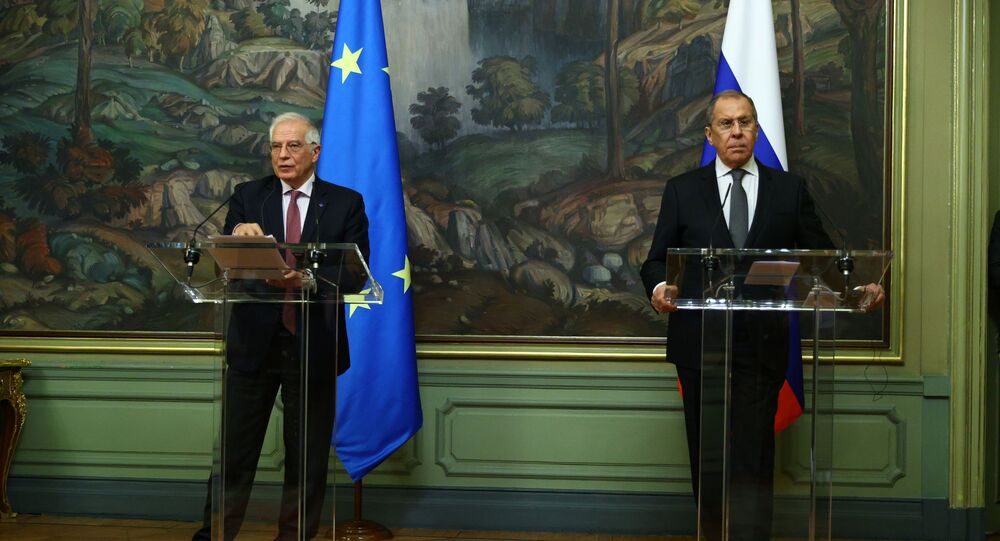 EU foreign affairs chief Josep Borrell and Russian foreign minister Sergey Lavrov both spoke of poor relations between Brussels and Moscow at their joint press briefing on Friday, with Lavrov saying talks got "bogged down" on the issue of jailed blogger Alexei Navalny.

A former British Conservative leader has accused the European Union's foreign affairs chief of kissing up to Moscow after he praised the Russian COVID-19 vaccine.

"I take the floor to just congratulate Russia for this success," Borrell said on Friday of the Sputnik V jab. "It's good news for the whole mankind because it means we are going to have more tools to face the pandemic."

"This is an example of the EU kissing the backside of Russia." Duncan Smith said.

The EU diplomat also drew flak from Washington and even Brussels, with one US source saying he should have demanded pre-conditions for the meeting.

"Borrell should not have gone to Moscow in the absence of securing some kind of substantial deliverable in advance," A former senior US official in the Obama administration told the Daily Telegraph, adding: "It does look like the Russians played Borrell."

And one unnamed EU diplomat said: "It was not a good performance by Mr Borrell. He was unprepared. Mr Lavrov played by his own rules and got everything he wanted."

But Lavrov complained at the press call that progress in the talks with Borrell had been "bogged down" in discussion of the jailing of blogger and government critic Alexei Navalny.

"Today we simply bogged down in a topic that for some reason the West is now trying to sideline, focusing all of its attention on protests and demonstrations in the Russia," Lavrov said. "I am referring to the topic of finding the truth about what happened to Navalny and when and where it happened."

And Borrell told journalists that relations between Moscow and Brussels were "far from satisfactory".

Borrell is a member of the EU's powerful commission, which has drawn harsh criticism in recent weeks for the slow pace of its vaccination programme — while the post-Brexit UK is moving six times as fast.

Hungary may be the first EU member state to start using Sputnik V as early as next week, Prime Minister Viktor Orban said this week.