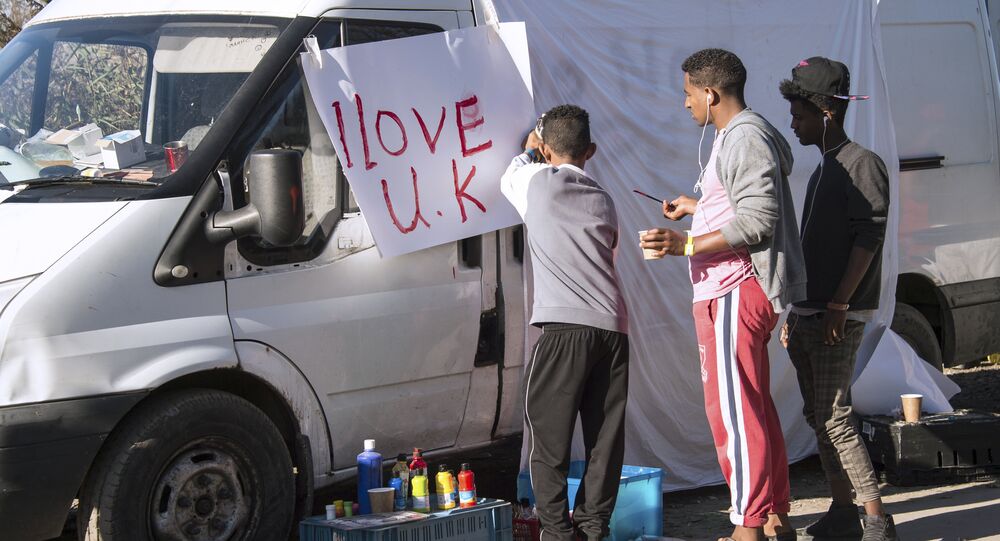 Losing Key Data on Migration Due to COVID, Brexit is Part and Parcel of UK's Problem, Academic Says

The coronavirus pandemic and Brexit has impacted the UK's ability to collect migration data and detect unauthorised newcomers, including potential extremists, as domestic immigration surveys have been suspended and the country has lost access to multiple EU databases after leaving the bloc.

Oxford University's Migration Observatory recently acknowledged that the pandemic has seriously affected migration data creating "massive uncertainty" about how many individuals are travelling to and from the UK at the moment. At the same time, in the aftermath of Brexit Britain has lost access to multiple European databases critical for combating transnational crime.

According to Business Insider, the UK is no longer capable of using the Schengen system that Europol exploits to track terrorists. The system was previously accessed over 500 million times a year by the UK, the media outlet noted citing a senior Belgian counter-terror official.

COVID and Brexit left UK immigration officials flying blind because the UK has lost access to a number of key databases, says Peter Williams, a senior lecturer with the Liverpool Centre for Advanced Policing Studies at Liverpool John Moores University.

"This is a symptom of us having to adjust to these new arrangements", he says. "There is no doubt that we have lost some key information and I think that is part and parcel of this problem".

According to Oxford University's Migration Observatory, the International Passenger Survey, which the Office for National Statistics (ONS) previously used to examine immigration, emigration, and net migration, was temporarily suspended in March 2020 due to health risks related to the pandemic. Likewise, National Insurance Number (NINo) registration data which provided some insight into migration patterns was upended by COVID while new registrations for EU citizens have been halted.

Our latest commentary ‘Where did all the migrants go?’ explains how COVID has led to a collapse in the UK’s migration data. We don’t know who’s arriving or leaving, who’s here, or where they are. This raises some serious challenges for post-COVID planning. https://t.co/Knl0Y37HDu

​However, it's not only immigration services that are feeling the pressure but also law enforcement agencies, according to the academic.

"All of them have been finding it very difficult in relation to their responsibilities and workloads because of the additional responsibilities and duties in enforcing the COVID regulations", he says. "Also, they have lost personnel because of self-isolation due to COVID - these sorts of issues. It will take a considerable amount of time - probably 12, 18 months before things actually sort of look about returning to normal".

One theme emerging during the interviews with Crime & Policing Minister Kit Malthouse today is our Police are overstretched & exhausted. It’s surprising no one has asked him if he regrets the Conservative Gov’t cutting 21,000 of them along with 23,000 police support staff

​When it rains, it pours, continues Williams citing the massive loss of criminal records data last month due to a "human error". In mid-January, Minister for Policing Kit Malthouse told British lawmakers that hundreds of thousands of DNA records and other sensitive data on suspects were wiped during a "regular housekeeping process" on the national police computers. According to Malthouse, the authorities were trying to recover the data but there was no guarantee that no criminal probe would be affected by the disruption.

After two weeks there are still no clear answers from the Home Office about the 400k deleted police records.

​It Will Take Time to Adjust to New Post-Brexit Reality

While quarantine measures are still in place and less people are travelling it's probably going to be easier in the short term to manage the problem, according to Williams. However, "in the medium term, for example, if things pick up in the summer when people start to travel again, it will be difficult for the security services to adjust at the moment", he says.

When it comes to the longer term "more permanent planning needs to be put in place, particularly to address the shortfall of the information and the intelligence that the UK has lost because of Brexit", the academic emphasises, suggesting that Britain needs to overhaul the migration system.

The UK's post-Brexit immigration policy can be as effective as they need it to be, but the immigration services and all the security services that are linked to transit in and out of the country, they all have to adjust to the new post-Brexit environment and new regulations, he believes.

Although new working practices are in the process of being implemented in the UK it is unlikely that they will be as effective in the short term as they were until the 31st of December, Williams concludes.