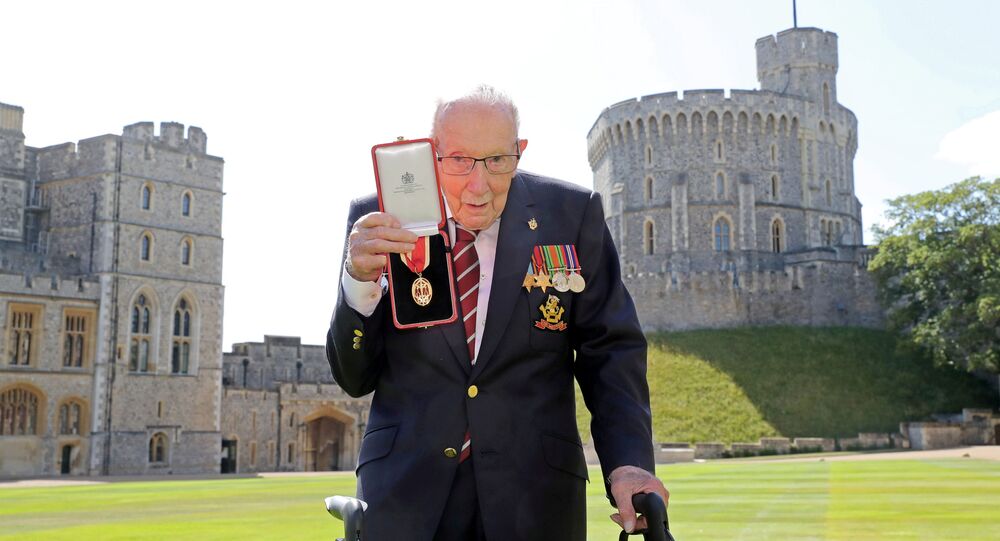 Captain Sir Thomas Moore, who became a national icon amid the coronavirus pandemic, was hospitalised after being treated for pneumonia and testing positive for COVID-19 last week.

Tributes have poured out on Tuesday for Captain Sir Thomas Moore, the British WW2 veteran and National Health Service (NHS) fundraiser who died the same day after contracting coronavirus at the age of 100.

Buckingham Palace announced that Queen Elizabeth, who gave Captain Tom a knighthood last year for his charitable work, will issue a private message of condolence to Captain Tom Moore's family.

“Her Majesty very much enjoyed meeting Cpt Sir Tom and his family at Windsor last year,” a palace statement said.

“Her thoughts, and those of the Royal Family, are with them, recognising the inspiration he provided for the whole nation and others across the world".

Boris Johnson also paid his respects to the late veteran, who notably raised millions for the UK's health service during the pandemic.

In a video from Downing Street, the UK Prime Minister said he was a "hero in the truest sense of the word" and paid tribute to his service during the country's "darkest days" of the second world war and his efforts to raise money for the NHS during the coronavirus crisis.

"In the face of this country's deepest post-war crisis, he united us all he, cheered us all up, and he embodied the triumph of the Human spirit", Johnson said.

He added that Sir Tom was not just a "national inspiration but a beacon of hope to the whole world".

Captain Sir Tom Moore was a hero in the truest sense of the word. His legacy will long live after him. pic.twitter.com/0Zn56gThCC

The flag above 10 Downing St has been lowered to half-mast in mourning.

The Union flags above Downing Street have been lowered to half mast in memory of the life of Captain Sir Tom Moore.#CaptainTom pic.twitter.com/SIC9enzpA3

“This is incredibly sad news. Captain Tom Moore put others first at a time of national crisis and was a beacon of hope for millions", the leader of the opposition wrote on social media.

This is incredibly sad news.

Captain Tom Moore put others first at a time of national crisis and was a beacon of hope for millions.

Britain has lost a hero.

While Beckahm described Captain Sir Tom Moore as the "very best of British", Morgan announced that his Life Stories interview would be re-aired on ITV at 10:45 pm Tuesday night.

UPDATE: As a tribute to the great @captaintommoore, and with the approval of his family, our Life Stories interview will re-air on ITV tonight at 10.45pm.
What a life.... what a story. pic.twitter.com/0GYLclQMDI

​The news emerged when daughters Hannah and Lucy released a statement saying with "great sadness that we announce the death of our dear father, Captain Sir Tom Moore.

“We are so grateful that we were with him during the last hours of his life; Hannah, Benjie and Georgia by his bedside and Lucy on FaceTime".

“We spent hours chatting to him, reminiscing about our childhood and our wonderful mother. We shared laughter and tears together".

Thanks for everything Sir Tom 💙

​They said that the "last year of our father’s life was nothing short of remarkable. He was rejuvenated and experienced things he’d only ever dreamed of".

Sir Tom’s fundraising efforts for the NHS last year saw over £32 million raised, walking 100 laps of his garden just before his centenary during the initial national lockdown in April.