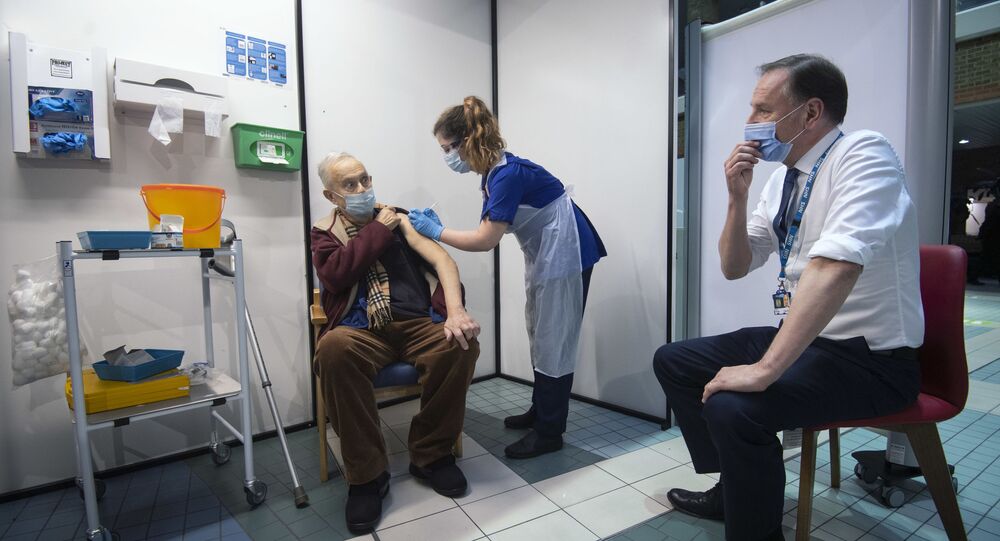 The United Kingdom has overseen a leading vaccine rollout against the ongoing coronavirus pandemic. As the European Union's inoculation initiative lags behind, questions have been levelled at Westminster about aiding other countries with their programmes.

Britain could aid the EU and other countries with coronavirus vaccine supplies before the UK's domestic vaccination rollout has been completed, International Trade Secretary Liz Truss said on Sunday.

Stressing the goal of international cooperation while speaking to Sky News Sunday, she slammed "vaccine nationalism" and stressed that while the UK needs to first "make sure that our population is vaccinated," London would work alongside other countries to inoculate as many people as possible.

"We have a target to get the most vulnerable vaccinated by late February. It’s a bit too early to say how we would deploy vaccines, but we certainly want to work with friends and neighbours, we want to work with developing countries," the international trade secretary said.

“There have been supply issues, so we need to make sure that the new drugs that are coming online are delivered, that the population is vaccinated,” she added. “But of course, as we’re developing that, we are also working with other countries about how we can help. It won’t help Britain if we become a vaccinated island and many other countries don’t have the vaccine."

Truss said that she could “absolutely guarantee” there will be enough jabs for the UK, despite the EU insisting that it should also have a sufficient supply of the vaccine.

Referencing a conversation between UK Prime Minister Boris Johnson had European Commission President Ursula von der Leyen, Truss said that she "has been very clear that those contractual supplies won’t be disrupted."

Could the UK give vaccine supplies to EU countries?

International Trade Secretary Liz Truss tells #Ridge it is "too early to say" how specific vaccines are deployed but says the UK wants to work with "friends and neighbours"https://t.co/4iXxdYl1Qw pic.twitter.com/hTr4m2hUOE

​Later, however, in an interview with Times Radio, Truss said that the UK could support other countries with their vaccine deployment while its own programme was ongoing.

“We’ve got enough vaccines to more than vaccinate the whole population and also help the rest of the world," she said.

“So those two things can both happen."

When asked by if this meant that UK supplies could be syphoned to other countries after the most vulnerable people in Britain had been vaccinated, Truss said this "could well be the case" but said it's not possible to "preempt what the situation will be in two months’ time."

.@trussliz, International Trade Secretary, says the UK could be helping other countries with vaccinations before every adult here receives their first jab.

''We've got enough vaccine to vaccinate the UK population and help rest of the world.''@GloriaDePiero | @tnewtondunn pic.twitter.com/sUjPXvRXZA

​Truss's comments reiterated previous pledges to maintain international collaboration made overnight by Vaccine Minister Nadhim Zahawi, who said Britain had gone “out of our way” to help the EU with vaccines supplies and “will continue to do so.”

Vaccines Minister Nadhim Zahawi says he has "every confidence" the UK will get deliveries of the Covid vaccine amid concerns over exporting jabs from the EU.@NickFerrariLBC | Read more: https://t.co/Z4DBptzB3d pic.twitter.com/co8DqdsQIJ

​So far, Downing Street has not ruled out the prospect of surplus vaccine doses being sent to the EU once the most essential vaccinations have been administered.

According to the government's timetable, the four most vulnerable groups are set to be totally vaccinated by late February, with the top nine tiers – including all people over the age of 50 – receiving the first dose by spring and every adult offered the jab by September.

This comes as UK front bench ministers seek to calm relations with the EU following the bloc's widely-criticised and now scrapped decision to introduce a vaccine border between Northern Ireland and the Republic of Ireland on Saturday.

The EU received backlash after suggesting that export controls could be placed on vaccines produced within the bloc. The World Health Organisation condemned the move and the pharmaceutical industry claimed that the restrictive policies could serve as a hurdle to administration efforts.

Conservative Brexiteers after demanding a change to the Northern Ireland protocol included in Britain's withdrawal deal from the EU in response to the threat to stop vaccines crossing the border freely in Ireland.