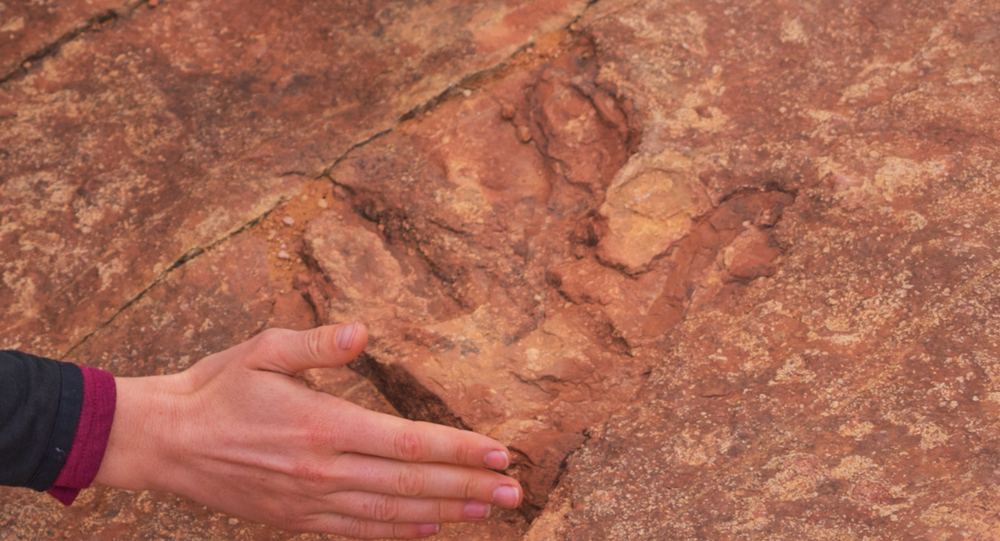 The Bendricks is a stretch of coastline in the Vale of Glamorgan in the south of Wales, as well as a protected site of paleontological interest. The area is famous for its discovery of fossilised dinosaur footprints, many of which have been removed and housed in nearby museums.

A four-year-old girl discovered a dinosaur footprint on a South Wales beach on Friday, described as the "best-preserved" in the UK, the National Museum Wales has announced.

Lily Wilder and her dad Richard were walking their dog along Bendricks Beach in Barry when she saw the footprint embedded in a rock.

They took photos of the find and returned to the site with Lily's mum, Sally, and her baby brother George.

"It was Lily and Richard (her father) who discovered the footprint," Sally Wilder told the National Museum Wales.

"Lily saw it when they were walking along and said 'daddy look.' When Richard came home and showed me the photograph, I thought it looked amazing."

Mrs Wilder said her husband "thought it was too good to be true" and added that she was "put in touch with experts who took it from there."

Scientists said the print is around 220-million-years old and could help experts find out how dinosaurs walked.

​Cindy Howells, palaeontology curator for the National Museum Wales, said the discovery was "the best specimen ever found on this beach."

She added that it was "one of the best-preserved examples from anywhere in the UK and will really aid palaeontologists to get a better idea about how these early dinosaurs walked."

“During the Covid pandemic scientists from Amgueddfa Cymru have been highlighting the importance of nature on people’s doorstep and this is a perfect example of this. Obviously, we don’t all have dinosaur footprints on our doorstep but there is a wealth of nature local to you if you take the time to really look close enough."

“This discovery is unique and worth protecting – we will be studying the footprint and it will teach us a lot more about dinosaur feet and their bone and muscle structure," she said.

While it’s not currently known what type of dinosaur the footprint belonged to, experts ascertained that the creature was 10cm long and 75cm tall.

According to the museum, there are no fossilised bones from this 220 million-year-old dinosaur, but similar footprints have been found in the USA attributed to the Coelophysis dinosaur.

The museum's added that numerous footprints have been identified in Bendricks Bay in the past but most are unlikely to be "from dinosaurs, but rather from some of the more crocodilian-type reptiles that also inhabited the area."

This lively little Coelophysis display at @DenverMuseumNS proves that a museum mount doesn't have to be absolutely colossal to capture the imagination. #FossilFriday pic.twitter.com/u9wndV9KZp

​“The fossil was extracted this week and will be taken to National Museum Cardiff where it will be protected for future generations to enjoy, and for scientists to study,” the National Museum Wales said.

The beach is privately owned and is legally protected as a Site of Special Scientific Interest (SSSI), which required special permission granted to Natural Resources Wales (NRW) in order to legally remove the fossil

According to the South Wales group of the Geologists' Association, the Bendricks is an important palaeontologist area and "the best site in Britain for dinosaur tracks of the Triassic Period."