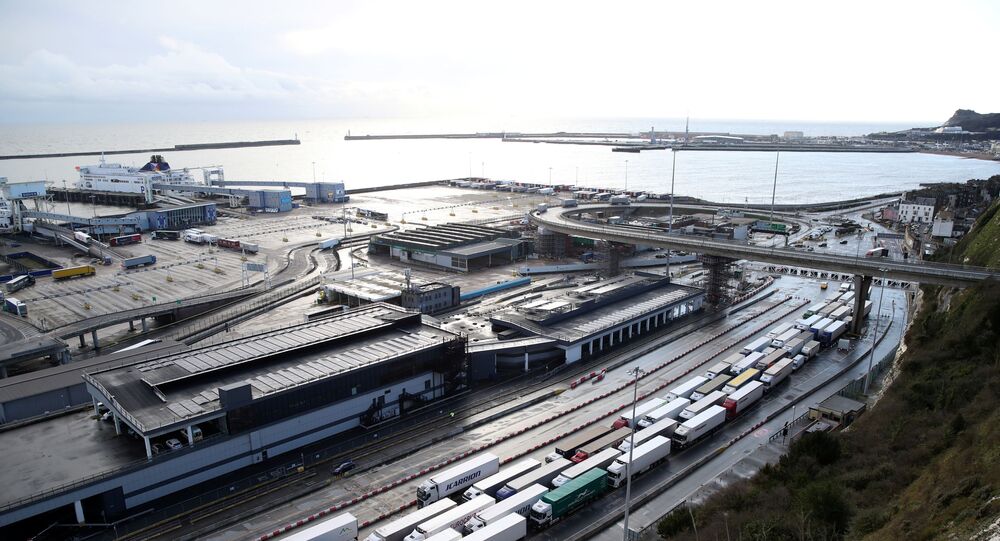 The British five (B5) major business lobby groups have warned the government about "significant difficulties" at UK ports following the country's withdrawal from the EU single market. UK academics have weighed up the potential consequences of red tape and other post-Brexit obstacles.

The B5, which is comprised of the British Chambers of Commerce, Confederation of British Industry, Federation of Small Businesses, Institute of Directors, and Make UK, fear that when the EU grace period ends over the next two months, red tape problems at the border may deteriorate even further as cross-border traffic, which is usually low in January, is due to increase in spring.

In a letter to the government, business lobby groups highlighted that more than half of businesses moving goods through the Dover-Calais route are experiencing delays due to new customs processes and other "sizable obstacles". Earlier, the Evening Standard reported that lorry drivers are spending an average of 3% to 5% longer moving across UK borders because of customs red tape. Meanwhile, ITV revealed that roughly 3,400 lorries a day travelled from the Port of Dover and Eurotunnel to Northern France last week, with 65% of these being empty.

"Brexit was predicted to cause some disruption because of all the new procedures and this is what we are seeing now", says Panicos Demetriades, professor of financial economics at the University of Leicester and former governor of the Central Bank of Cyprus. "Whether these are just teething problems, with firms getting used to new customs procedures or something more permanent, only time will tell".

Some 65% of lorries travelling from the UK to the EU are empty.

Non-tariff barriers like red tape are the main obstacles to modern trade, not tariffs.https://t.co/T6Rpi84F9M

​In general, there will be a continued impact on trade between the UK and the EU due to Britain's pull-out of the single market, "the beauty of which is that there are no barriers to trade whatsoever", the professor presumes.

Since 1 January, British haulers have become bogged down in red tape, being obligated to fill out piles of documents, in order to comply with rules regarding origins, VATs and health checks so that they may deliver their products to the continent.

EU customers are cancelling orders from the UK because of a mass of red tape, UK manufacturers have said, as anger builds over a lack of government Brexit support and antiquated customs systems https://t.co/2DyHrbAbzY

​Meanwhile, some UK firms that export their goods to the EU said they were encouraged by government officials to establish subsidiaries in the union to minimise disruption under post-Brexit trade rules. In response to the report, the Department for International Trade asserted that it was "not government policy".

"One can possibly imagine ways in which the government can provide assistance to help companies navigate the red tape, but these are expensive", notes Professor Michael Ben-Gad, a distinguished economist at City, University of London. "In the end once you are out of a customs union, trade involves inspections and bureaucracy in order to ensure that rules of origin agreements are not flouted".

The end result of these obstacles, for small producers in particular, will be "less business" with the EU, according to Ben-Gad, who believes that the bloc's small businesses will be hurt as well. As a result, British consumers will "enjoy less choice and variety in the goods they buy and also pay more because of lessened competition", he suggests.

Unemployment has hit 5 % in UK as pandemic continues to hit jobs. But in the EU the average is 8.3 % and as high as 22 % for people under age of 22. Red tape & regulations in EU strangling jobs

​While the main idea behind Brexit was that the UK will be able to trade with the rest of the world freely once it leaves the EU, this promise has yet to materialise, the professor says, adding that "the trade relationship outside the EU is the same as before, but substantially worse with the EU".

"The British had lots of reasons to object to the way the EU operated, but the UK had a reasonably good deal – access to the single market of 450 million people without membership in either Schengen or the Eurozone", argues the academic. "I doubt the UK will re-join the EU or the single market, but I can imagine a time when the UK, disappointed with its new trade arrangements, asks to join a customs union with the EU".

The Chancellor of the Duchy of Lancaster, Michael Gove, earlier issued a statement on the government’s commitment to helping companies adjust to the new circumstances. On 28 January, Gove chaired a meeting of the Brexit Business Taskforce with the B5, acknowledging "challenges with specific aspects of our new trading relationship with the EU". The UK government's press release asserts that overall, businesses "have adapted well to the changes" and that border traffic is "increasing day by day". The website notes that the level of compliance remains "very high", with "turnbacks stable at less than 5% of total traffic – either for failing to meet customs requirements or lack of a negative COVID test".