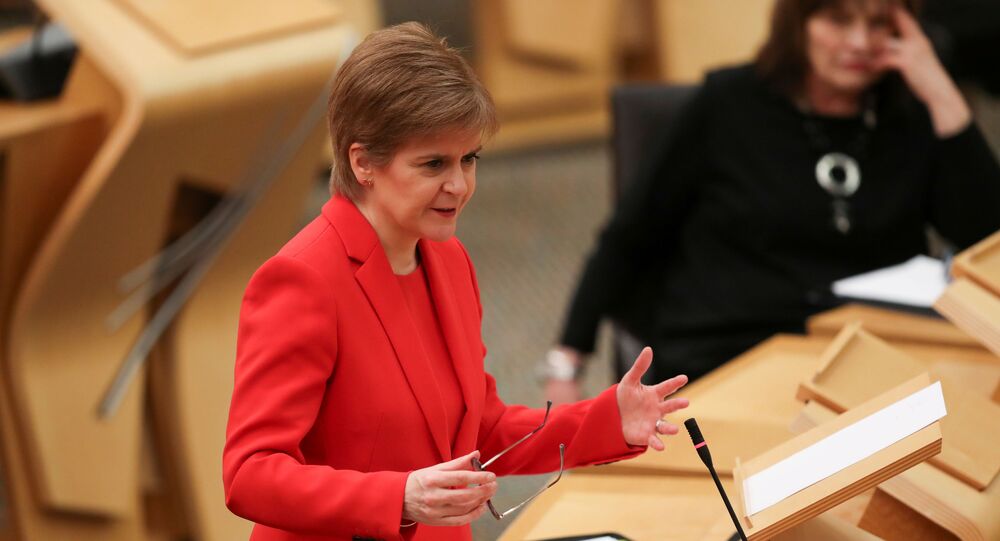 While the 2014 referendum saw a victory for keeping the union together, the SNP claims that Britain's withdrawal from the EU has changed the circumstances sufficiently to hold another vote.

First Minister Nicola Sturgeon said that her government will hold a referendum on Scottish independence if the SNP wins a majority in the May elections.

Speaking on Andrew Marr Show on Sunday, the nationalist leader accused UK Prime Minister Boris Johnson of being "frightened of democracy" and she is dedicated to a "legal referendum" on the issue of Scotland leaving the union.

Ms Sturgeon claimed that the prime minister "fears the verdict and the will of the Scottish people" as he continues to refuse to allow another independence vote.

"He's frightened of democracy. The polls now show a majority of people in Scotland want independence", she said. "If the SNP win the Scottish election in a few months' time on a proposition of giving people that choice then what democrat could rightly stand in the way of that?"

She also told Marr that she believed there was "no reason" to delay the 6 May elections even though the coronavirus pandemic remains ongoing but suggested that it may be conducted "differently".

This comes as the Scottish National Party unveiled a "roadmap to a referendum", laying out their 11-point plan on how they intend to pursue a second vote.

📣 @JohnSwinney outlines @theSNP's plan for securing an independence referendum if we win a pro-independence majority in May.

🗳 20 polls in a row show a firm and sustained majority for @YesScot.

🏴󠁧󠁢󠁳󠁣󠁴󠁿 The people of Scotland, not Boris Johnson, will decide their own future. pic.twitter.com/ZrvzpiSiLu

​While they claim a pro-independence majority would pursue a legal path to securing a referendum, the roadmap also states that any attempt by the UK government to oppose the legality of holding a vote will be "vigorously opposed" in the courts.

Under the Scotland Act of 1998, a Section 30 order permits Holyrood to pass laws that are typically determined by Westminster. This was given to the devolved authority by the UK government just before the first independence referendum in 2014.

Recent surveys have shown consistent leads for independence, seeing a surge in support following the United Kingdom's withdrawal from the Europan Union, which the majority of Scottish voters opposed.

🗳️ A new poll by @panelbase is the 20th in a row to show majority support for Scottish independence.

🏴󠁧󠁢󠁳󠁣󠁴󠁿 Scotland’s future must be in Scotland’s hands, not those of Boris Johnson’s. https://t.co/bkLETL68v1 pic.twitter.com/LVm8IUSqRW

​This comes as polls in Northern Ireland also show majority support for holding a vote on reunification with the republic, indicating that the United Kingdom is now under threat of separation from two of its constituent members.