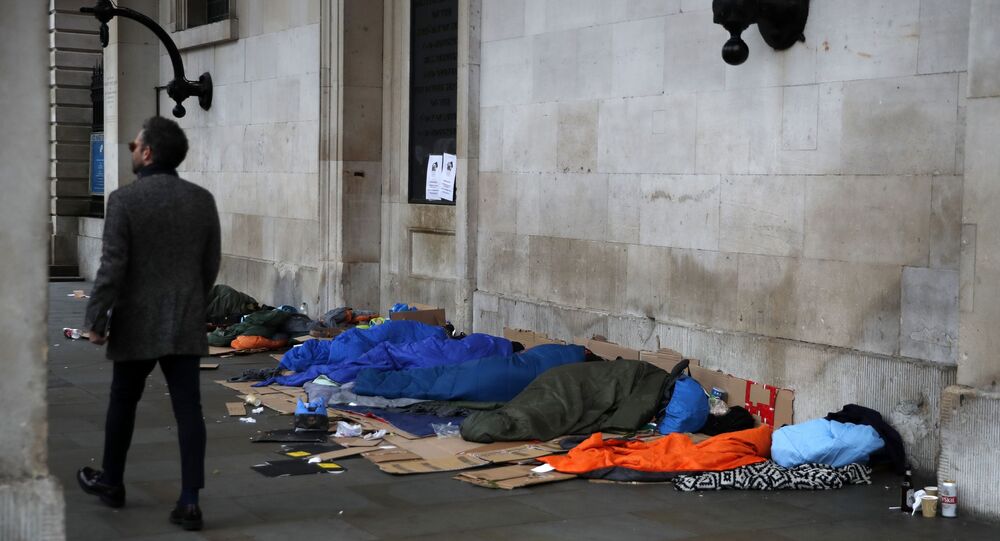 As government ministers criticise the focus gender, race, and disability in decision-making, activist groups in the UK have called on Westminster to live up to its claims and enforce the socio-economic duties in the Equality Act.

Activist groups are demanding the British government demonstrate its commitment to improving social relations by extending the Equality Act to cover economic inequality.

“This is clear evidence of a growing desire amongst the British public for their government to take real and momentous action to tackle poverty and inequality," said Jennifer Nadel, co-director of the campaign group Compassion in Politics.

“And no wonder. Since 2010 child poverty and homelessness rates have risen at alarming rates, infant mortality has grown, and life-expectancy has flat-lined. The Covid crisis has exposed and exacerbated this deplorable situation."

She accused the government of being "out of step with the public" and cited communities across the UK coming together "to support one another, witnessed the selflessness of key workers, [while being] inspired by the campaigning efforts of Marcus Rashford [Manchester United footballer who helped convince the government to continue giving vulnerable children free meals]."

“Let’s translate that energy, care, and concern into our politics and into a compassionate drive to eradicate poverty, reduce inequality, and provide everyone with the support they need to live a good life," she said.

Nadel added that the government should immediately enact the "socio-economic duty" included in the Equality Act, which came into law more than a decade ago, as well as establishing benefits and minimum wage rates “at a level that is high enough to meet the cost of living.”

“A compassionate nation does not allow people to be made homeless or go hungry because their benefits or wages are inadequate," she added.

This follows a survey seen by The Independent commissioned by Compassion in Politics and carried out by Opinium – it revealed that 57 percent of voters agree that the socio-economic clause should be activated, with only 6 percent opposing.

Dr Wanda Wyporska, executive director of The Equality Trust, also claimed that if the clause had been in place by the time the coalition government took power 2010, "then we might not have seen the drastic cuts made by public bodies over the past decade."

“Importantly, at a time when we know inequality has increased, with Covid-19 playing a part, it is even more crucial to introduce this. If the government really wants to level-up, then it could commence the Duty very quickly," she said.

The demands come as ministers say there has been an overemphasis on race and gender at the expense of “socio-economic status” and class position.

In a speech in December, equality minister Liz Truss, said: “the focus on protected characteristics has led to a narrowing of the equality debate that overlooks socio-economic status and geographic inequality.”

In a landmark speech, Liz Truss will kickstart a reversal of Labour-led decline on equality.
Identity politics is going down. 👎
"Socio-economic status and geographic inequality” is going up. 👍 pic.twitter.com/LdkrBahbah

​The Equality Act was enacted in the final months of the last Labour government and requires state policy to take into account protected characteristics like race, sex, and disability.

The act's “socio-economic duty” would also bind lawmakers and public bodies to consider “due regard” for economic inequality in all decisions made.

Official data from the Office of National Statistics last year revealed that people living in poverty are more vulnerable to the coronavirus compared to those in higher income brackets.

The mortality rates in the poorest parts of England and Wales are double compared to the wealthiest demographic in the UK. Ethnic minorities were also been found to make up one-third of virus patients admitted to critical care units, despite being just making up 13 percent of the population.