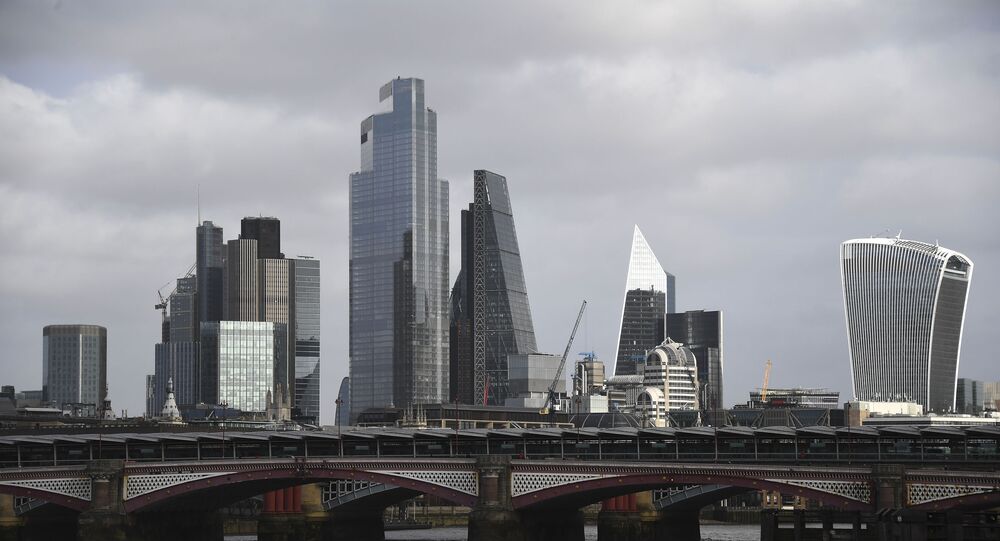 Will the City of London Remain Europe's Main Financial Centre After Brexit?

Following Brexit, London’s position as one of the world’s biggest financial hubs is hanging by a thread, European economic experts say, admitting however, that the City cannot be immediately replaced by any of the EU's financial centres or a network of these hubs.

On 1 January 2021 the City of London lost its blanket access to EU financial markets which is due to be replaced by the equivalence system, which envisages the bloc recognising Britain's legal requirements for regulating services, even though they may not be exactly the same. However, an EU-UK comprehensive equivalence agreement, which would help preserve London as a hub for EU finance, has yet to be struck, creating an atmosphere of uncertainty.

Financial services have not been part of the bumpy UK-EU trade talks regardless of the fact that they account for 7% of the UK's output and 10% of its tax receipts; 40% of the sector's exports go to the EU.

Less than four weeks before the Brexit transition period expire,d Brussels had granted equivalence for only two activities: derivatives clearing houses in Britain for 18 months, and settling Irish securities transactions for six months, according to Reuters.

The ongoing negotiations about equivalence are "absolutely critical" but it appears that London is shooting itself in the foot by trying to pressure the EU into concessions, according to Marc Ostwald, global strategist and chief economist at UK-based ADM Investor Services International.

"The more that the British government says, ‘Well, we need to retain control and the equivalent, you just need to recognise what we do is good’, it doesn't work that way," he insists. "Creating some sort of special concession - and this is what the issue is, the UK Government wants a special concession, which actually would make it better to be in the UK than in the EU. Now, why on Earth would the EU actually agree to that?"

Brussels needs to be sure that the UK rules will remain similar to those of the bloc to prevent London from gaining a competitive edge. For its part, Britain says that it will tweak the regulations but won't lower standards. One might wonder as to whether the City will lose its veneer of a European financial capital should the UK and the EU fail to reach a compromise.

© Sputnik / Chris Summers
The City of London Corporation is represented by a dragon
"It is possible that London will lose the status as the financial capital of Europe but the success of it will depend on regulation requirements imposed by both London and Brussels," says Giuseppe Bova, Senior Lecturer in the Department of Economics at Nottingham Trent University. "In the case where regulation will diverge, you will necessarily see part of the European business move to Europe or in the very least some additional services being created in Europe to deal with the difference in regulation. And so yes, London will not be anymore the financial door to Europe."

The process of London losing its status of financial capital of Europe won't be quick, suggests Gavin Barrett, a professor of European Constitutional and Economic Law at University College Dublin, adding that while a lot of jobs have already been lost, it's only a fraction of those predicted in the most pessimistic estimates.

On the other hand, the City already has a competitive advantage over its European peers given its taxation, regulation and ease of doing business, stresses Daniel Lacalle, chief economist at Tressis Gestion: "If Europe keeps aggressive tax and regulatory frameworks, many opportunities will be lost," he notes.

"For corporate Europe, London can expect to remain the leading financial centre in Europe," asserts Iain Begg, professor at the European Institute of the London School of Economics and Political Science.

© REUTERS / Toby Melville
City workers walk past the Bank of England in the City of London, Britain, March 29, 2016.

What if the City Loses Its European Clientele?

Still, all won't be lost even in the worst case scenario under which the City of London loses almost all or a sizable chunk of its European clientele, according to observers. Thus, Daniel Lacalle believes that the UK may turn its eyes to Asia and Latin America, "as the City originates at least one-third of all investments into those areas".

Giuseppe Bova agrees that promising emerging markets are concentrated currently in Asia and the City is eyeing them as an opportunity. However, it remains to be seen how attractive London can be to Asian economies given that there are already some major financial centres, he notes. According to him, London's good reputation and well-known legal system can help to attract business, given the security that London can offer.

"London’s expertise can be interesting for other economies around the globe and depending on the access that Brussels will grant to London there could be simply a shift in business from European centred business to business outside Europe," he suggests.

Still, Marc Ostwald does not see London losing all its clientele anytime soon, arguing that there are lots of ways of circumventing this. For his part, Gavin Barrett pins hopes on devices such as usage of equivalence and EU-based subsidiaries which will enable business with European clientele to continue. The EU has long been Britain’s biggest financial services customer, worth around $40 billion a year.

© AP Photo / Michael Probst
Clouds are seen over the buildings of the banking district and the European Central Bank, right, after sunset in Frankfurt, Germany, Thursday, June 18, 2020

The City and EU's 'Banking Union'

At the same time, the City cannot be fully replaced by any of European financial hubs, some observers believe, although Frankfurt, Paris, Amsterdam, and Dublin do offer some opportunities in this field.

"Different cities have attracted a certain number of jobs from particular branches of the financial services industry but fragmentation means that none of these rival cities can offer the financial ecosystem or critical mass that London can," says Gavin Barrett.

🇬🇧UK FinTech attracted $4.1bn in venture capital ranking second globally behind only the US
💡Reinforces the UK’s position as a global and European leader

​To some extent, Dublin may partially play a role of an EU financial hub due to its attractive tax system, presumes Daniel Lacalle, adding that "there will be clusters of opportunity for Madrid, Milan, Frankfurt and Paris in equal measure".

​Given this, the Bank of France's governor, Francois Villeroy de Galhau, came up with the plan last year of uniting the bloc's financial centres into a "financial Eurosystem" after Brexit. "On markets, let's be clear: there will not be a single City for the continent, but rather an integrated polycentric network of financial centres, with specialisations based on areas of expertise", he said at the Paris Europlace International Financial Forum on 7 October 2020.

However, at the current stage the plan appears to be impracticable due to the enormous tax and bureaucratic burden, says Daniel Lacalle.

Although a decentralised system can have benefits in terms of security, it can be also more costly since having everything in near proximity, in the same time zone, does have its advantages and was one of the main selling points of London, according to Giuseppe Bova. Nevertheless, if there is enough political consensus within the bloc de Galhau’s plan is "possible and feasible", he adds.

"This is a matter of political will within the EU", agrees Marc Ostwald. "Villeroy and [the ECB’s Andrea] Enria and a lot of ECB officials understandably want the banking union to come to fruition - it hasn't come to fruition thus far. I can see he wants that to happen, but there are politicians involved - it has to be a political agreement on banking union".

While the EU is floating bold capital market plans and arguing with the Brits about the equivalence system there's yet another factor, challenging Europe's financial prosperity and sovereignty, i.e. the advent of the US dominance, according to Ostwald.