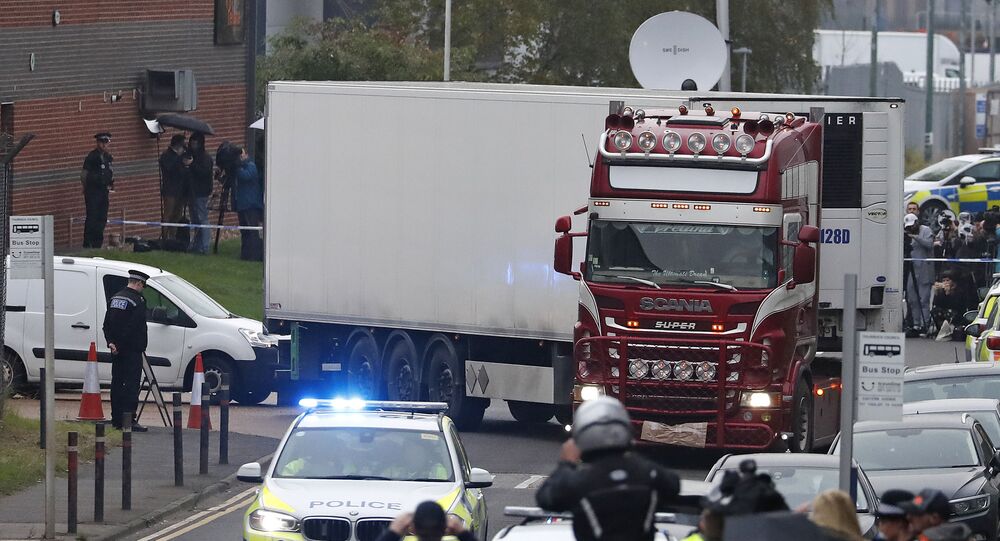 As People Traffickers Jailed, Why Has UK Border Force Not Got A Grip On It After 20 Years?

Four people have been jailed for a total of 78 years for manslaughter after 39 Vietnamese migrants died in the back of a lorry trailer in Essex in October 2019. It came less than 20 years after an almost identical case at Dover, so why were the lessons of that case not learned?

On 18 June 2000 a lorry, being driven by a Dutchman, was stopped at the port of Dover. Inside were the bodies of 58 Chinese migrants, who had suffocated.

On 23 October 2019 another truck, this time driven by an Irishman, arrived at the port of Purfleet and within an hour the bodies of 39 Vietnamese migrants were found inside, having suffocated.

In both cases the migrants were brought over by people trafficking gangs using rogue lorry drivers or hauliers.

Last month Eamonn Harrison, the trucker who took the Vietnamese migrants on the first leg of their fateful journey was convicted of manslaughter and on Friday, 22 January, he was jailed along with another driver, Maurice Robinson, haulier Ronan Hughes and trafficker Gheorghe Nica.

Nica was jailed for 27 years, Hughes for 20 years, Harrison for 18 years and Robinson for 13 years and four months. Another driver, Christopher Kennedy, was sentenced to seven years in prison.

Two other men were convicted for their role in the conspiracy - Valentin Calota, 38, from Birmingham, was jailed for four and-a-half years and Alexandru Hanga, 28, from Tilbury, was locked up for three years.

Seven men were today sentenced to more than 92 years in prison following an investigation into the tragic deaths of 39 Vietnamese nationals in October 2019. NCA officers worked with @EssexPoliceUK, providing crucial support and assistance.

​Mr Justice Sweeney said the 39 migrants must have died "excruciating and slow deaths".

In the last two decades thousands of people have survived such trips and entered Britain illegally. As well as those coming in the back of lorries, thousands more have come across the Straits of Dover in small boats and dinghies.

In June 2020 the National Audit Office said in a report the Home Office had not accurately estimated the number of people in the UK illegally since 2005 - when the figure was 430,000 - but it said independent research estimated the number had since risen to almost a million.

In August 2018 six men were convicted of trafficking migrants from Belgium to Kent in small inflatable boats. Eighteen Albanian migrants - who had each paid £6,000 - almost drowned on May 28, 2016 when the rigid hull inflatable boat they were on got into difficulties during a night-time crossing of the English Channel.

While trafficking by sea is understandably difficult to stop, many MPs and immigration campaigners struggle to understand why the UK Border Force has not managed to find a foolproof way of checking lorries coming through ports like Dover, Purfleet, Newhaven and Harwich or through the Eurotunnel.

© Photo : Essex Police
The 39 Vietnamese migrants who died in the back of a lorry en route to England

In 2003 Tony Blair signed the Le Touquet agreement with French President Jacques Chirac and it effectively moved the UK border from the dockside at Dover to Calais and allowed British officials to check lorries as they boarded ferries on the French side of the Channel.

But it is not foolproof.

The Irish/Romanian gang who smuggled the 39 Vietnamese migrants in used the Zeebrugge-Purfleet crossing, which was described in The Independent as far back as 2000 as being the "secret back door" to Britain.

They were only caught because the 29 men, eight women and two boys died, possibly because the trailer was overloaded, leading to fatal levels of oxygen depletion and heat exhaustion.

Tran Thi Tho, 21, was one of those who died in the back of the lorry.

Her family told the police she had been unable to get a job after graduating as a nursery school teacher in Vietnam and eventually decided to travel to Britain.

Her father said: "Now we have lost her, it is a great pain to us. When Tho went overseas, she did not tell us what job she would do over there. We know she wanted to work overseas to reduce our hardship."

© Photo : Essex Police
Gheorghe Nica in a convenience store in Thurrock shortly before getting into the cab of Harrison's truck

Witness X, who survived an earlier journey with the Purfleet trafficking gang, told the trial he had flown from Vietnam to Poland in February 2019 on a legitimate visa and took a business course there before travelling to France, where he met an intermediary who directed him to an apartment in Paris where he met the 13 other Vietnamese migrants.

Mr Justice Sweeney said, in his sentencing remarks, the conspiracy - which ran from May 2018 until October 2019 - was "sophisticated, long-running and very profitable".

Way back in April 2000 Her Majesty's Customs and Excise - who were then in charge of monitoring traffic at ports - said they were planning to install new technology capable of hiding people in lorries.

At the time it was admitted the technology was not able to scan every lorry so trucks would be chosen at random, or from intelligence.

It is not clear whether the technology was ever introduced but the people traffickers do not fear it, as was shown by the evidence from the Purfleet manslaughter trial.

Witness X told the court they were given a briefing by their handler before they got into the back of the truck and were told that shortly before it arrived at the port the driver would bang on the side of the truck and that would be the signal for them to move to the centre of the trailer, where it was more difficult for them to be detected.

© Photo : Essex Police
Eamonn Harrison, wearing a distinctive top, buying a can of soft drink after loading the migrants onto his truck

The trial heard that after being smuggled into Britain the Vietnamese migrants would arrive at a lorry park in Orsett, Essex, where they would be picked up by cars or minibuses and ferried to a large flat in Dulwich, south London.

They would be locked in the flat by a Vietnamese man called Fong until their relatives paid the final £10,000 instalment.

At that point they would be free to go and would make their way to nail salons or restaurants up and down the country where they would work illegally, trying to pay off the huge sums paid to the traffickers.

Hughes, Nica and the two truckers have now been sentenced but Fong has not been traced.

In the 2000 case the lorry driver, Perry Wacker, was jailed for 14 years for manslaughter.

He had closed the only air vent on the side of the container to avoid detection by immigration officers.

The two ringleaders - Gursel Ozcan, a Turkish national, and Haci Demir, a Dutchman, were both jailed for nine years by a court in the Netherlands.

Interpreter Ying Guo was jailed for six years for conspiring to smuggle illegal immigrants into Britain but the “Snakeheads” who had organised the migrants from China’s Fujian province were never caught.

Snakeheads were back in the news in 2004 when 21 illegal immigrants from China drowned while picking cockles in Morecambe Bay in Lancashire.

Illegal immigration from the Far East dropped out of the headlines for years - replaced by fears of migrants from Africa, the Middle East, and Afghanistan - who travelled either overland or across the Mediterranean.

It was only when the bodies were found in Maurice Robinson's truck in October 2019 that the authorities realised people trafficking from the Far East was still a problem and now there will be fresh pressure for something to be done about rogue truckers.

Detective Chief Inspector Daniel Stoten, who led the investigation into the 39 deaths, said: "The criminals in this case made their money from misery, they treated victims as a commodity and transported them in ways we would not transport animals."

DCI Stoten earlier said it was estimated the gang had successfully smuggled into Britain around 500 migrants, mostly from Vietnam, in the period between May 2018 and October 2019.

The fact that Britain has left the European Union might make a difference although the Christmas Eve trade agreement is designed not to hamper lorries travelling to and from Britain and it is unclear if anything has been put in place to prevent yet another truckload of migrants from dying.

Sentencing Hughes, Nica, Robinson and Harrison on 22 January, Mr Justice Sweeney said people trafficking "significantly undermined the United Kingdom’s attempts to regulate and control immigration. The control of immigration, which affects the social fabric of our country, our economy, and our security, is an area of considerable public concern."