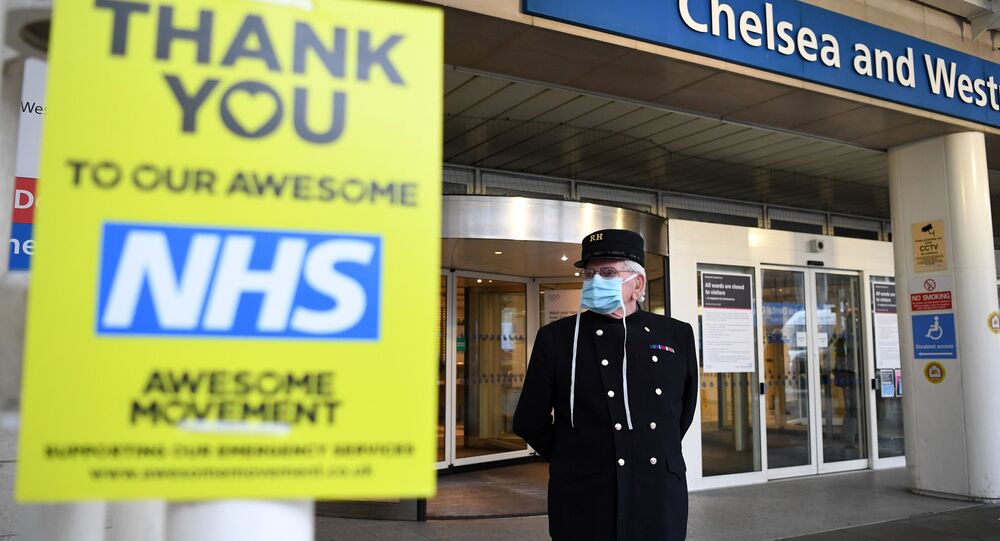 The latest statistical data shows that despite implementing quarantine measures, the UK has had the highest coronavirus death rate in the world over the last week. British healthcare experts have discussed the growth of coronavirus-related mortality and whether tougher lockdowns or inoculation programmes could curb the pandemic.

Oxford University's platform Our World in Data has revealed that an average of 935 daily deaths over the last week was the equivalent of more than 16 people in every million dying from COVID per day. The UK's total confirmed coronavirus cases has mounted to over 3.4 million, with more than 91,600 COVID-related deaths.

The figures come as UK Prime Minister Boris Johnson refuses to rule out tightening lockdown rules in England and First Minister Nicola Sturgeon ramping up quarantine measures in Scotland. Earlier, a new, more contagious variant of SARS-CoV-2 was discovered in the country.

"In the run up to Christmas, our national strategy wasn't robust enough", observes Dr David Strain, clinical senior lecturer at the University of Exeter, chairman of the BMA's medical academic staff committee and COVID Consultant in the South West of England. "We are now seeing the impact of that, we are seeing cases rising at the fastest rate per head of population of Europe. We're seeing hospitalisations at the stage where we have a crisis in many hospitals. And we are now seeing one of the highest rates of death per million population anywhere across Europe at least".

In November, Johnson set a three-tier system for England which was expected to run until spring. On 2 December, the UK’s Medicines and Healthcare Products Regulatory Agency (MHRA) approved Pfizer and BioNTech’s COVID-19 vaccine for emergency use, which many saw as a light at the end of the tunnel. However, the discovery of a new strain of SARS-CoV-2 forced the British prime minister to impose an effective lockdown on over 16 million people in England and abolish plans to ease restrictions for Christmas.

"We had a rule of six that allowed six separate households to get together in an outdoor space", says Strain. "That rule was fundamentally flawed, but it didn't recognise that COVID doesn't care where you are, it cares about who you're with and keeping people isolated is the way out of it… And that falls back on the pre-Christmas strategy".

While lockdowns do reduce transmissions and deaths in the short term, it is unclear whether a strategy that involves intermittent lockdown followed by periods of relaxation reduces the overall burden resulting from the coronavirus pandemic, believes Dr Jason Oke, senior statistician at the Nuffield Department of Primary Care Health Sciences, University of Oxford.

"The death rate in the UK is currently high but looks similar or lower to other Eastern European countries (e.g. Czech Republic, Slovakia, Lithuania, Slovenia) according to the ECDC", he notes.

Besides, although the mortality is still rising, Britons are starting to see that new hospitalisations are plateauing, remarks Strain, adding, however, that there is a long way to go before the country can lift the quarantine restrictions.

© REUTERS / POOL
Britain's Prime Minister Boris Johnson speaks during a virtual news conference, after chairing a COBRA meeting, which was called in response to increased travel restrictions amid the coronavirus disease (COVID-19) pandemic, at 10 Downing Street, in London, Britain, December 21, 2020

Inoculations appear to be part of the solution, according to the observers. The UK has already authorised two vaccines for emergency use: the Pfizer-BioNTech jab and the Oxford-AstraZeneca coronavirus drug. According to the BBC, six hospital trusts, in Oxford, London, Sussex, Lancashire, and Warwickshire, are currently administering the anti-COVID drug, while other available doses are being sent to GP-led health services and care homes across the country. To date, over four million Britons have been immunised. The UK government promised to inoculate 15 million Britons from the top four priority groups within the next five weeks and 17 million from the remaining five groups by spring 2021. Top priority groups include elderly people and younger adults with health conditions.

"Immunisation in the older age groups are expected to decrease the number of hospitalisations and deaths", believes Jason Oke, who looks at the vaccine rollout with hope.

The role of the inoculation is "both pros and cons", according to Strain. On the one hand, there appears to be huge benefits. On the other hand, nobody knows for certain whether the vaccine stops the spread of the disease, or it just stops people from being hospitalised and put into ICU. "And even in that instance it doesn't stop it completely", the clinical lecturer says. "So, [as] the inoculation programme stands at the moment isn't going to be the answer to that problem".

He warns against a false sense of security stemming from the immunisation programme, adding that COVID cases are soaring partly because some groups of people are not taking the COVID lockdown as seriously as they should.

Despite some cases of people not following the rules, for the most part, the existing lockdown is actually being observed, Strain emphasises, assuming that it could be the result of the very high numbers of hospitalisations and mortality which have recently been reported in the press.

"Similarly, the stories about long COVID happening to the younger fitter population are also having an impact on people that may not have been as cautious before", the clinical lecturer says.

At the same time, the current lockdown isn't as stringent as previously, and more people are exempt, trying to keep some degree of economy running, he explains. According to Strain, "the effect of the lockdown is visible in the now lowering number of new cases, and in the plateauing of the hospitalisations, the lockdown is itself doing what it's supposed to do".

Furthermore, the lockdown measures are reducing the number of COVID patients in already overwhelmed hospitals, leaving the room for those suffering from other acute diseases. Strain notes that while in the hospital, where he works, only 20% of beds are currently are with COVID patients, "there are some hospitals that three quarters of their beds have got COVID patients in them", which means the usual business cannot continue there.

"The biggest problem in our hospital is trying to address the backlog of work from effectively nine months' worth of hospitals not functioning as normal", he underscores. "We are dealing with COVID, we've actually got good at dealing with COVID. And we can manage that very efficiently. But what we're also having to find routes to deal with in a COVID secure manner, and deal with cancer patients, patients who've got long term conditions like diabetes or heart failure, patients that have not been able to see their usual physicians in a normal manner".

It is possible that the lockdowns will be made more severe and even go back to what was happening in the first lockdown, where absolutely everything was cancelled, he says, adding, however, that a very careful balance between the economy and the health of the nation has to be maintained. The government should also tread carefully while exiting the quarantine regime, and some strict measures should still remain in place.