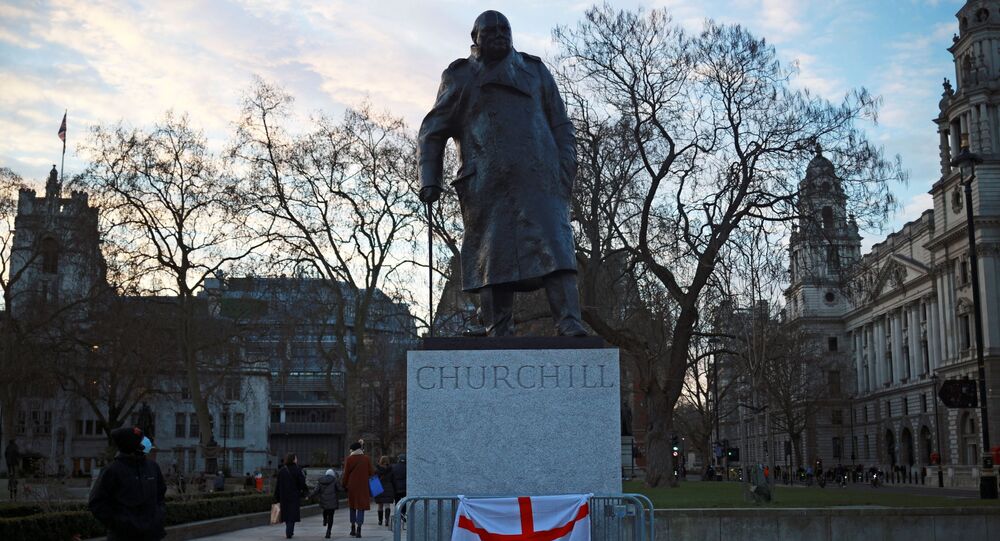 A senior UK Labour Party MP has compared the defence of monuments to Second World War leader Winston Churchill to a 2017 far-right rally in the US.

In an interview with liberal newspaper The Guardian, shadow foreign secretary Lisa Nandy compared Prime Minister Boris Johnson’s opposition to removing Churchill’s statue from sites including Parliament Square to the 2017 Unite the Right rally in Charlottesville, Virginia, at which a counter-protester was murdered.

In the interview praising incoming US President Joe Biden as a "woke guy" and an "inspiration" for Labour, Nandy repeated questionable claims by the Democratic candidate and US media sympathetic to him that outgoing President Donald Trump had praised the roughly 500 marchers, including members of neo-Nazi and white supremacist groups.

“Two years later we had the prime minister here trying to start a culture war over a statue of Churchill and also exactly the same pattern of behaviour in relation to trans rights," Nandy is quoted as saying. "In 2019, No 10 was polling the red walls to see if it could start a culture war in northern towns over LGBT rights”.

In fact the vandalism of Churchill's monument and those of other historical figures, including Indian national liberation leader Mohandas K Gandhi — followed by calls to remove them — began in 2020 during British protests in solidarity with the resurgence of the Black Lives Matter (BLM) movement in the US.

Nandy's comments were at odds with Labour Leader Sir Keir Starmer, who in June last year supported a campaign by the conservative Daily Mail opposing any moves to remove Churchill's statue from outside the Houses of Parliament.

​Starmer had earlier condemned as “completely wrong” and "lawlessness" the demolition of the statue of 17th-century merchant and philanthropist Edward Colston, who made part of his fortune from the transatlantic slave trade, by BLM protesters in the southwestern port city of Bristol.

Churchill served as prime minister from 1940 to 1945, leading Britain to victory against the Axis of fascist powers dominated by Nazi Germany. Earlier he had consistently criticised his fellow-Conservative predecessor Neville Chamberlain's policy of appeasement with Nazi leader Adolf Hitler and his failure to forge a military alliance with the Soviet Union.

As a young man, Churchill was commissioned as an officer in the British army and fought in a series of colonial wars, including the Mohmand campaign in India, at the 1898 Battle of Omdurman in the Sudan and in the Second Boer War in South Africa, where he was captured and famously escaped from a POW camp in Pretoria to neighbouring Mozambique.

He went into politics in 1901, being elected first as a Conservative and then as a Liberal party MP, eventually serving as home secretary and First Lord of the Admiralty. Following the failure of the Dardanelles offensive in Turkey, which Churchill pushed for, he resigned from the government in 1915 to volunteer to fight in the trenches in Belgium.

Modern critics have claimed Churchill bore responsibility for the 1943 Bengal Famine which caused 2 to 3 million deaths. Other historians have pointed out that the root cause was Imperial Japan's invasion of the British colony of Burma, a major rice-producing region, and that Churchill ordered a halt to food exports from colonial India to the blockaded UK in response.

It was not the first time Nandy had made controversial comments in support of "woke" positions. In an interview with ITV's Good Morning Britain last March during her campaign for Labour leader, she drew equivalence between South African Olympic athlete Caster Semenya — a hermaphrodite who has been legally female since birth — and male-born athletes who wish to compete in women's sporting events after identifying as transsexual.

© REUTERS / SIMON DAWSON
Keir Starmer to Claim Labour Under His Leadership ‘Pro-American but Anti-Trump’
Nandy came third to Starmer and Rebecca Long-Bailey in the leadership election last April. Both Nandy and Long-Bailey, along with the other female candidates who dropped out before the balloting stage, had signed a set of 12 "pledges" written by the Labour Campaign for Trans Rights, a Twitter account set up months earlier. Those pledges included branding feminist groups including Women's Place UK as “trans-exclusionist hate groups” and expelling their members from the party.
...
Reddit
Google+
Blogger
Pinterest
StumbleUpon
Telegram
WhatsApp
54