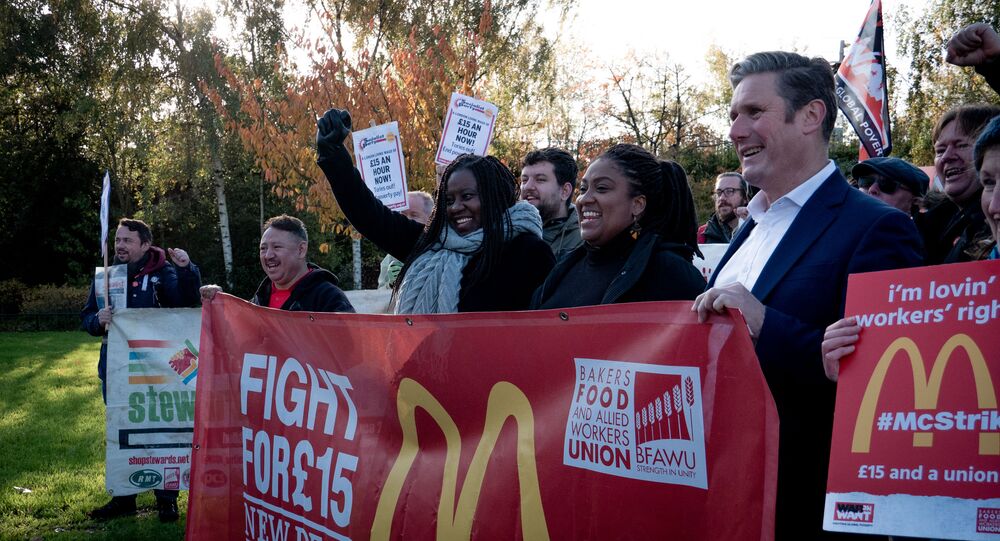 Attempts to 'Rip Up' UK's Worker Protections Will Be Met With Stiff Resistance, Union Leader Insists

Britain's 48-hour work week, minimum wage and other employment protections are currently under review by Boris Johnson’s Tory government, now that the Kingdom has exited the EU and finalised its deal with the trading block.

Ian Hodson is the National President Bakers Food and Allied Workers Union. Hodson explained to Sputnik why he thinks proposed changes to employment law in the UK, now that Britain has left the EU, represent an assault on worker’s rights that will affect the most precarious of workers the most and that must be resisted.

Sputnik: Explain what is known about current government proposals to amend the rights of workers in the UK.

Ian Hodson: Recent reports suggest the Tories are drawing up plans to rip up workers protection that was enshrined in EU law. Suggestions are they are drawing up plans to put forward a package of deregulatory measures. At this time, leaks suggest they intend to end the 48-hour week protection returning to the days when bosses could force workers to work any number of hours to meet business's needs, reduce the number of breaks and cut the right to overtime payments covered by the directive.

Still, reports suggest the deregulation could go even further [such as exempting] start-up firms from employment law and minimum wage requirements, including [with] regional variations.

Sputnik: What kinds of workers would be most directly impacted by these changes?

Ian Hodson: All workers could be hit by these proposals and lives could be put at risk as we return to a long work hour culture; tired drivers especially would be of great concern. Government officials said that Britain gold-plates EU standards by offering 5.6 weeks and suggested the rest of Europe enjoys four weeks which, if enacted upon, would remove up to eight days of working peoples’ holiday entitlement.

Low paid workers or those who have their wages boosted by commission and/or do regular overtime could be hit particularly hard if the changes go ahead. Many of the worst affected will be the very key workers on the frontline defending us from COVID-19 at this time.

We see the consequences of the Tories' last deregulation policies, from the last decade, coming back to devastate us by undermining The Health and Safety at Work etc Act 1974, which has meant the lowering of safety standards. The failure to prepare with the necessary PPE has not only cost lives but has been shown to have had a devastating impact on the UK economy as we were so unprepared to deal with this COVID-19 crisis.

Sputnik: Would these changes breach EU regulations that the UK was bound to when it was still within the union?

Ian Hodson: It's likely the changes may have some repercussions on the recent deal, but the deal was abysmal on protecting workers' rights. It's probably not going to be a significant impact.

Sputnik: The Financial Times, which broke the story about the proposed changes to worker protections, quoted a government spokesperson saying that the UK "has one of the best workers' rights records in the world", and that "Leaving the EU allows us to continue to be a standard-setter and protect and enhance UK workers' rights." How do you respond to those comments?

Ian Hodson: These measures are contrary to the claims the Government made in “levelling up” (a phrase used by the Tories during general election about raising standard on pay, job security and infrastructure in the North of England). They will cut pay, increase working time, reduce holidays and impact jobs, as employers will be able to reduce cost by forcing workers to work longer hours, meaning they won't need to recruit workers. This is about cutting costs and turning the UK into a sweatshop of the European Union. The UK has the worst record on issues of employment. Indeed, [former New Labour Prime Minister] Tony Blair used to boast about having the most restrictive employment legislation in the Western world, and successive governments have continued to reduce rights in the UK workplace.

Sputnik: Is it not arguable that changes economic realities mean that businesses require more flexibility in terms of managing their staff?

Ian Hodson: For Britain to survive as an independent nation outside the EU, it cannot continue to be reliant on having the most insecure and lowest paid workforce. It has to be bold and turn into a country that offers its citizens a better deal than the one they had. That requires creating an economy based on job security, higher pay and real gold-plated workplace rights. People didn't vote to leave for a worse deal, they voted to leave because they have been told their hardship was due to the restrictions placed on the country by the EU. People will not, in my opinion, respond well to the idea of being worse off after all these years of being told how much better off they would be.

Sputnik: Are organised labour calling for their own proposals, in respect of the rules governing employees but also workers who are categorised as self-employed?

Ian Hodson: Trade unions have always wanted to see a better deal for working people both inside and now outside the EU. There are differences, though employers will have to negotiate with our members if they want to take up this grab-for-profit opportunity. It's workers who are not organised in unions covered by a collective agreement that will likely suffer the most.

Our members, I'm sure, will not take the undermining of their hard-won terms and conditions lightly. The idea that they will meekly give up holidays or breaks [is misplaced]. They won't sit back and accept cuts to pay either, and if an employer wishes to find out what happens if they do go down this path, they will meet a membership prepared to strike.

And that to me is the exact message unions should send to any fly-by-night employer whose eyes are lighting up with the thought of an even bigger bulging bank account on the backs of working people.