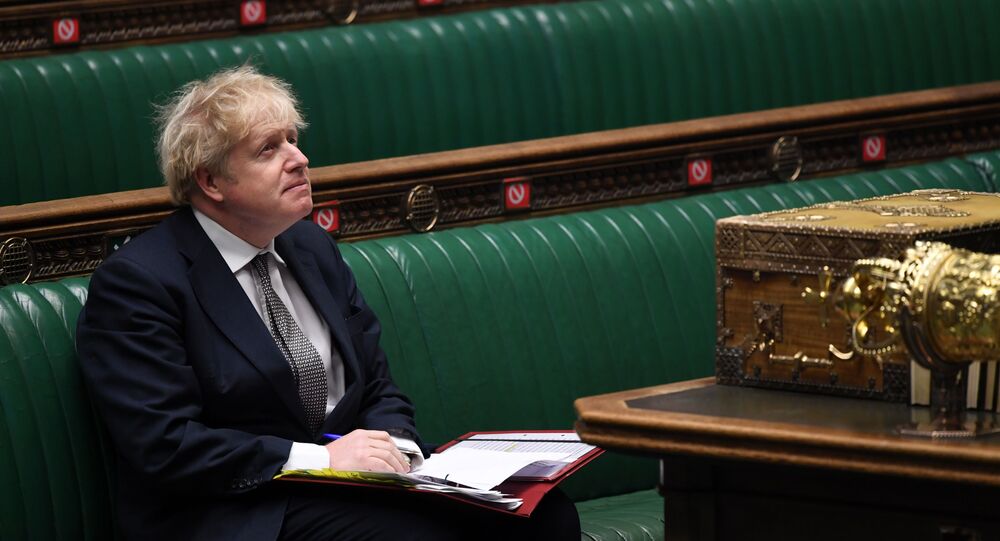 Universal Credit was raised in the UK by £1,040 for the 2020/21 financial year, as the poorest families have been worst affected by the coronavirus pandemic's economic fallout, however, the Government was reportedly intending to slash the benefit, with Boris Johnson emphasising the 'focus' is on jobs rather than ‘welfare’.

The UK Prime Minister is said to be under pressure from a 50-strong faction of MPs, the Northern Research Group (NRG), to reconsider the move amid the coronavirus pandemic “until lockdown is lifted”.

The emergency payment increase was seen as a much-needed measure to prop up those whose livelihoods had been hardest-hit by the COVID-19 health crisis and the ensuing lockdowns and restrictions.

Six million families would be affected by the measure, the Child Poverty Action Group has warned, adding that 200,000 more children might be stripped of a crucial ‘lifeline’.

The plea for the government to maintain the payments further - any decision to keep the higher rate may only be laid down in the March Budget - comes days before a Monday Parliamentary debate on keeping the £20 UC increase and extending it to legacy benefits.

On Monday, there will be a Parliamentary debate on keeping the £20 UC increase AND extending it to legacy benefits

Email your MP to let them know that their support is needed in this crucial debate https://t.co/ij8qO7FpCD
#KeepTheLifeline #IncreaseLegacyBenefits pic.twitter.com/xQ1HkmBxOb

​Stephen Crabb, a Tory ex-cabinet minister, hailed the effort of his colleagues in the Northern Research Group of MPs.

​The call by the “red wall” Tories - hailing from constituencies in the Midlands, Yorkshire, North East Wales and Northern England which historically tended to support the Labour Party – is contained in its submission to the Treasury ahead of the Budget on 3 March.

The Chancellor of the Exchequer, Rishi Sunak, had announced that the government would publish the Budget on Wednesday, outlining the next phase of the plan to tackle the coronavirus and protect jobs.

Other proposals in the submission seek a business rate “holiday”, a reduction of the VAT to 5 percent for tourism and leisure businesses hit by the pandemic.

The abolition of the stamp duty on properties worth under £500,000 as well as an extension of the mortgage payments “holiday” for workers on furlough are also proposed as vital under the current challenging circumstances.

Legislation on England’s new COVID-19 lockdown restrictions lasts until 31 March, with prospects of easing the restrictions hinging on how quickly the UK can roll out vaccination.

NRG leader Jake Berry emphasised that by March, much of the north of England would have been living under tough restrictions for almost a year.

“Lockdowns – although necessary while we wait for the vaccine to be rolled out – only entrench and compound disadvantage already felt by those communities this government has promised to level up. Now is the time for the Treasury to provide stability, not uncertainty, to people across the country, by confirming it will stick to task and continue supporting families and businesses,” said Berry.

“Rishi Sunak must end the uncertainty for millions of families and secure our economy by cancelling the cut. If he refuses to act, we urge Conservative MPs to vote with Labour on Monday to protect families’ incomes.”

UK Ministers have repeatedly refused to extend the benefits uplift. Boris Johnson said earlier at the Commons Liaison Committee that “the best thing is to get people into employment".

Labour MP Stephen Timms urged Johnson to extend the benefits hike and weighed in on the uncertainty that people were forced to contend with amid lack of clarification on the issue, saying:

"Isn't it unfair leaving it until March before they find out whether that cut is going ahead?"

However, Johnson responded by saying any final rate was still under review.

There is no dignity or respect here. The best way to loosen the grip of #FoodPoverty is to boost incomes directly through #UniversalCredit and Child Tax Credit. #FreeSchoolMeals https://t.co/oM9Iz6OB4R

​Boris Johnson is known to have made repeated U-turns on a succession of issues, ranging from the free school meals voucher scheme and NHS surcharge for overseas health and care staff to A-level and GCSE results grading, when faced with a backbench revolt.